This week SMART Living 365 introduces you to Lynne Spreen as our last guest blogger before returning from our trip.  I am a friend as well as a reader of Lynne’s blog Any Shiny Thing.  On her blog, Lynne often writes about positive aging and other SMART ideas that I find valuable.   Thank you, Lynne, for filling in and sharing these great ideas. 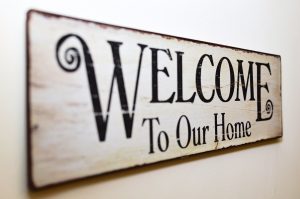 In 2007, a billboard in my town advertised a new housing tract that featured two master bedroom suites, available in their biggest model. It sticks in my memory because I was appalled. Who would buy a house with two master suites?

This was just before the Great Recession, a period of real estate excess when people were buying way too much house and, in some cases, flipping homes like pancakes.

One day, as I drove past that billboard, the concept hit me differently. I mean, it was like a light switching on, illuminating a sunny possibility–more than one family could live comfortably in those homes.

Let me explain. As a grandparent, I’ve provided years of childcare and other parental backstopping that provided economic support and stress relief to my family. I wasn’t the only one. As I waited at the school gates for the bell to ring, I was surrounded by other gray-haired caretakers. When I’ve attended daytime school activities, I see lots of grandparents doing the same. At my grandkids’ swim lessons this summer, fully half the adults there were of my generation. I love seeing how we’re all taking care of each other. My mother, who is in her early nineties, lives four blocks from me. My husband and I help her a lot, and if / when she gets to that point, I’d like to welcome her to move in with us.

Caregiving is a human reality. Families and friends help each other. That’s our American culture. Do you remember the TV show, The Waltons? Three generations lived together. They pooled their resources and helped each other with chores. That’s how we used to do things in this country.

Now, each little family is its own ruggedly individual unit, paying strangers for child and elder care, commuting in two cars to two exhausting jobs, handling all the cooking and cleaning and extracurricular student activities and homework. As I passed that billboard, I wondered why we’re making things so hard for ourselves when a good solution lies in those oversized houses nobody wants anymore.

Suddenly, the big house looked like a smart idea. Especially after the crash of 2008, when homeowners lost their jobs and couldn’t pay their mortgages. The inspirational Brené Brown tells of two brothers, estranged for years, who were both about to lose their homes in the Great Recession. Instead, they reconciled, pooled their resources to save one of the homes, and the two families moved in together. A relationship was reborn. Life got better.

Now that Baby Boomers are aging, many of them are looking to sell their big empty nests and downsize. While this sounds great, not everyone wants or is able to sell and move. For one thing, there’s a crush at the gate. The Boomer demographic is massive. Whatever they do, tens of millions of them are doing it at the same time. In this case, Boomers are shedding big homes in favor of smaller ones, or in favor of rental housing. This is having a ripple effect on two aspects of the housing market.

So even if you want to sell, it may not be possible or wise.

Besides, not every big-home owner wants to move. Maybe you’ve heard the downsizing drumbeat but love your home and neighborhood. Maybe after years of work, the house and yard finally look exactly the way you want them. You put a lot of thought into this house when buying it, and you’re pleased with its location, the available services, the weather, the social environment, and proximity to family. But there are current and future worries.

There might be a solution right under your roof.

When Mom was a young adult, there was no work in her small hometown of Dickinson, North Dakota, so she and her sisters moved to the west coast. They ended up in Los Angeles, where they rented rooms in a boarding house. Do you remember these?

Back in the day, a housemother supervised the operation of what was originally built as a private home. She provided a certain number of meals.  Women (the homes were gender-specific) rented a bedroom, either solo or shared. Bathrooms were communal. The house had rules, such as those restricting gentlemen callers to certain rooms or visiting hours. The young women had jobs and social lives, but they also had built-in friends and a sense of security. They might have left family behind in the Midwest, but in the big city they had a new kind of family from which they could safely enjoy their surroundings.

Do you see the possibilities? I’ve wondered if aging Boomers, who can’t or don’t want to sell their too-big house, might resurrect the concept of the Boarding House of our parents’ generation. Almost like a bed – and – breakfast, except it could be long-term bed – and – dinner.

There are two huge demographics from which your boarders / renters might appear: Millennials and Baby Boomers. Did you know their demographics are approximately equal? Between the two of them, tens of millions of people are looking for smaller, less burdensome housing arrangements.

Older people are downsizing, and many of them want a more communal arrangement, often due to death of a spouse and the resulting fear of (or reality of) intense loneliness. New forms of housing are emerging. In fact, Kathy wrote about cohousing last November (you can read that post here).

Younger people are hesitant to “upsize,” saddled as they are by student loans and rising rents. Housing may be unaffordable, especially in urban areas where they work. Also, long-term employment with one company is a thing of the past. Now, younger people choose to rent because they might have to pull up stakes to chase after a job.

This can mean opportunity for you and your big house. Of course, if you’re going to open your home to roommates, you’d want to go about it in a smart way. Please educate yourself fully before making the leap.

Here are several websites and articles that will get your wheels turning:

As an author who writes about people over fifty, I’m intrigued by this idea of repurposing a too-big empty nest into a cozy, communal sanctuary for people who want companionship and independence as they age. In researching for this post, I posted a question on Facebook asking what my friends saw as the most serious issues they feared in older age. Far and away the number one issue was loneliness. I was reminded that loneliness and isolation can be a negative factor affecting our longevity, but now I feel much more optimistic!

When I was a child, two-thirds of the houses on my street were occupied by a stay-at-home mother and a passel of kids. That was the Baby Boom. Now, as we age, perhaps we’ll return to the warmth of our childhood, and many of the too-big homes on your street will be occupied by a small group of adults, all helping each other and providing companionship in the second half of life.

Have you ever thought about opening your home to roommates, or being one yourself? How do you see this idea?  Please share your thoughts in the comments below.

After a thirty-year career in Human Resources, Lynne M. Spreen reinvented herself as an author, speaker, blogger, and teacher. She writes midlife fiction and romance because she believes the second half of life is a rich, untapped literary vein of human drama.  All her books are available on Amazon.  Lynne and her husband live in Hemet, CA and  you can find out much more about Lynne through her blog Any Shiny Thing.