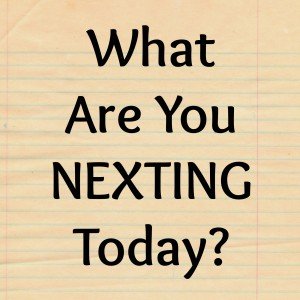 One of the best words I came across this last year during my reading was the word “nexting.” Used by author and research scientist Shane Lopez in his book Making Hope Happen, it describes the act of planning things in the future to look forward to, in a positive way. I’ve also been doing a lot of listening to Abraham-Hicks and the Law of Attraction where I’ve been continually reminded that what we think about and focus on is “attracted” automatically into our lives. In addition, as a long-time student of New Thought, I know that what I dwell upon often becomes my day-to-day reality. So with summer upon us, I think it might be SMART for each of us to spend some time nexting the positive events we hope to experience during the coming months.

When you really think about it, taking the time to anticipate a positive future might be one of the highest priorities we can have. Like I mentioned last week when talking about the concept of essentialism, if we don’t prioritize our lives, some one or some thing else will. Nexting helps us create our lives by design rather than default. Plus, by first recognizing the importance and then following through with the action of nexting, we are narrowing the playing field towards what we would like to experience.

Where Did The Idea of Nexting Begin?

Shane Lopez believes that nexting is a big part of making hope happen. As a research scientist dedicated to helping school systems come up with a better way to encourage students to learn, Lopez says nexting comes naturally to kids. He first came up with it when walking and talking with his son. Lopez says, “By encouraging (my son) to talk about the future, I find out what he is excited about. I learn about his plots and plans, and I help him come up with lots of ideas for how to make things happen.”

But it isn’t merely just a nice way to talk to his son. Lopez uses nexting to check in with his son to see how he is feeling about his future. Lopez says, “When he is feeling positive, his mom Alli and I do our best to ‘fluff him up’ even more. We know the emotional lift helps him think about ways to make his performance better, the best it can be. When we see that he is nervous or fearful, we try to figure out why, and whether we need to intervene or let him work it out.” But Lopez is also quick to point out that he never offers quick fixes or automatic cheerleading tactics. Instead he believes the process of nexting helps his son realistically address the inevitable challenges everyone goes through on the way to achieving their goals and dreams.

One of the most attractive things about Lopez’s version of nexting is how it works side-by-side along with a hopeful attitude. I’ve already covered those ideas more fully in an earlier post so if you want more info, go to my article: Why Hope Matters. Ultimately Lopez teaches that nexting helps us each experience more hope in the world.

Although nexting sounds like good common sense, there is actually more and more science in the area of positive psychology to back it up. Author Shawn Achor in his book The Happiness Advantage cites a study in which people who just thought about watching their favorite movies actually raised their endorphin levels by 27%. He says, “Anticipating future rewards can actually light up the pleasure centers in your brain as much as the actual reward will.”

Alex Lickerman, M.D. and author, agrees. He says, “…anticipating something pleasant seems to have almost unequaled power to make our present glow.” In fact, as Lickerman admits, “Anticipatory joy is often greater than the joy brought to us by experiencing the very things we anticipate.” Lickerman is so convinced that this anticipatory joy is a good thing that he says, “Anticipatory pleasure is so important to my sense of well-being, in fact, that I now plan my life in such a way that I almost always have something to look forward to.”

Probably the most recognizable version of nexting happens when any of us plan a vacation. Called “vacation anticipation,” a study done in the Netherlands and published in the journal Applied Research in Quality of Life reports that the biggest boost of a person’s happiness levels occurs in the eight weeks leading up to a vacation. And while the trip itself is usually a happy experience, shortly upon return the vacationers didn’t feel any happier than those who had never taken a trip to begin with. Interestingly enough, the length of trip didn’t seem to increase happiness levels at all. Based on the data, study authors suggest that shorter and more frequent trips will make us happier than one long vacation once a year.

In addition, a research study done at the University of London by A.K. McLeod, and C.Conway in 2005, concluded that subjects with expectations of future positive experiences were more likely to measure higher on a scale of subjective well-being. Basically, those who anticipated the future in a positive way experienced a larger social network (more friends), had a high number of steps in plans to achieve goals, and even had a slightly higher household income. These are all good reasons to keep nexting for sure!

And let’s not forget the power of nexting in the medical field. A study in 2011 entitled, “The Effect of Treatment Expectation on Drug Efficacy: the Analgesic Benefit of the Opioid Remifentanil,” confirms what many of us have suspected for some time. It reports: “On the basis of subjective and objective evidence, we contend that an individual’s expectation of a drug’s effect critically influences its therapeutic efficacy and that regulatory brain mechanisms differ as a function of expectancy. We propose that it may be necessary to integrate patients’ beliefs and expectations into drug treatment regimes alongside traditional considerations in order to optimize treatment outcomes.” In other words, what you next about your medication and your treatment will influence the outcome of your healing. Wow!

I think most of us know on some level that nexting is a great way to focus on creating a more positive future. Unfortunately, I also think many of us forget this simple practice to give ourselves a “well-being boost” no matter what we are experiencing in our lives.

Nexting actually targets our thinking in a way that activates certain parts of our brain. As Tali Sharot, author of The Optimism Bias says, “A brain that doesn’t expect good results lacks a signal telling it, “Take notice — wrong answer!” These brains will fail to learn from their mistakes and are less likely to improve over time. Expectations become self-fulfilling by altering our performance and actions, which ultimately affects what happens in the future.”

But What About The Power Of Now?

Okay, I can hear all the Eckhart Tolle fans asking, “What about living in the now?” From my viewpoint, it is similar to the paradox of the yin and yang, the both/and, or a Zen Koan. While I’ll admit that it can be problematic to mentally live only in the future, my life experience proves that I can live quite happily in the now and also anticipate the future with great pleasure.   I personally like how Abraham-Hicks says repeatedly, “Feel happy with what is, and eagerness for what is to come.”

As many people who know me personally know, I am quite a planner—especially when it comes to planning my vacations. Through the years I’ve had quite a few people criticize this quality saying I lack spontaneity or that I miss the experience of wonderment when I travel. I think nexting proves how very wrong that criticism is. In fact, because I “next” my travel plans so thoroughly and enjoyably, I am actually boosting my happiness factor for a much longer period of time than most people.

From all I read and from my own direct experience, I think it’s safe to say that those of us who are able to “next” a positive future on a regular basis have an advantage. Indeed, to repeat what Dr. Lickerman says, “…anticipating something pleasant seems to have almost unequaled power to make our present glow.” The SMART news is that this is something every single one of us can start doing today. So what are nexting right now?