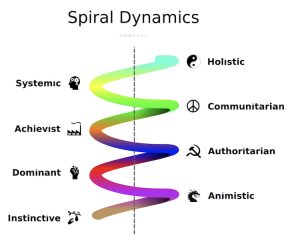 One of the problems with being endlessly curious is that I sometimes forget about something interesting and helpful that I learned in the past. The concept of Spiral Dynamics is just like that. This last week my husband Thom happened to mention it, and voila!, the light bulb went on!  I instantly remembered what captivated me about the theory years ago.  In my view, Spiral Dynamics is a good explanation for why some of us have a difficult time getting along with other people.  Not only is the country polarized in many ways, but so too are some friends and even family members. To me, Spiral Dynamics offers an elegant understanding for not what we think, but why we think so differently.

What exactly is it? The idea of Spiral Dynamics was originally created as a way to describe psychological and awareness development on both an individual and collective level.  Back in the 1950s, while Abraham Maslow was formulating his Hierarchy of Human Needs, a psychologist named Clare W. Graves began doing research on what makes people different in terms of behaviors, values and worldviews. He didn’t “type” personalities, instead he called his work, “”The Emergent, Cyclical, Levels of Existence Theory.”

Unfortunately Graves passed away before publishing his conclusions, so he is less known than his contemporary, Maslow.  Then in the 1980s and beyond, two of his students, Don Beck and Chris Cowan, went on to publish a book titled, Spiral Dynamics based upon Grave’s work.  Beyond their collective efforts, the well-known author Ken Wilber expanded the theory in his book a Theory of Everything and other books that followed.

At its core, Spiral Dynamics attempts to explain that human thinking is not fixed. (Remember the idea of a “growth mindset?)  When forced by circumstances and/or life experience, people adapt and construct more and more evolved and complex worldviews that help them come to terms with the world that they then inhabit.  As people adapt and evolve, their new world model transcends all previous models, yet it still contains those ideas and understandings that have gone before.  These new models, often called memes  (or vMemes because they are related to core values) appear to be particular mindsets that can grasp greater and greater complexity.  Keep in mind that these vMemes apply to individuals as well as organizations, businesses and the culture itself.

Okay, in case that is a bit heavy to understand, here’s another way to think of it.  Hasn’t it been said, “When I was a child I thought like a child?”  That is actually a good way of thinking of a person who is living their life from a world view that exists somewhere on the lower spiral of understanding. It doesn’t make the child wrong, bad or stupid, just not evolved enough to fully understand growing complexity.

Or what about when you attempt to explain climate change to someone who just doesn’t believe in it?  Again, if one person has an understanding of something, and another doesn’t believe it at all, they are likely on different levels of the spiral. The tricky thing is, even though it is tempting to see the spiral as a one-way ticket upwards, it is actually a dynamic system that can flow either way.  And remember, as you rise to greater complexity, all of the other worldviews and thinking still exist within you.  Just as a child starts with sitting, then crawling, then standing, and eventually walking and running, so too does our thinking often evolve.

In the beginning Graves came up with a chart that basically described his theory using the eight categories of developed thought.  It wasn’t until Beck and Cowan came along that they began putting the eight categories in a spiral graphic. They also began describing the eight “levels” using different color schemes, but insist that the colors were only meant as a teaching tool. Then when Ken Wilber began tweaking the theory to fit his understanding, he altered the colors of the spiral to reflect his understanding of the spiritual chakra system.

So what are the categories or “value systems”?

#1 Beige.  Survival, instinctual, automatic, reflective.  Earliest instincts of Homo sapiens based upon groups for survival.  (1/10% of the current world population)

#2 Purple.  Security, tribalistic, animalistic, magical.  Security comes from following the group and its leader/representative.  (Evolved approximately 50,000 years ago and is now 10% of the current world population.)

#4 Blue.  Order, obedience, follows rules, authoritarian leaders.  Black and white thinking (and only one right way)  where people must follow rules, structures, procedures and who is in charge.  If you do you will eventually be rewarded in this life or the next.  (Evolved approximately 5,000 years ago and is 35-40% of current world population.)

#5 Orange.  Achievement, success, scientific, strategic.  Often explained as the ideal of the individualistic capitalistic society.  Power, money and success is most valued.  Seeking to “live the good life” with material abundance at all cost. (Evolved approximataely 300 years ago and is 25-30% of world population—up to 50% of the U.S. population)

#6 Green.  Community, egalitarian, environmental, personalistic.  Seeks inner and outer peace while sensitive to others and the environment.  (Evolved approximately 150 years ago and is 10% of the world populations—20% in the U.S.)

Once you progress beyond the first six levels you enter what is called the Second Tier which allows you to more fully understand and appreciate the First-Tier levels.

#7 Yellow.  Systemic, synergy, integrative, big-picture view. The realization that everything is interconnected and part of a system.  (Evolved about 50 years ago and is 1% of the world population)

#8 Turquoise.   Holistic.  Sees the world and all things in it as an interactive, interconnected system.   (began expressing about 30 years ago and is .01% of the world population.)

(Thanks to The Next Evolution these statistics)

So what does all this mean and how does it help us get along with other people?  While there is so much more to understanding Spiral Dynamics, what it does is help to remind me of several things.

#1 It is nearly impossible for people who have a world view lower on the scale to understand where someone from a high-level thinking is even coming from.  Think of trying to explain the concept of thermodynamics to a three-year-old (or some 60-year-olds!)  It isn’t going to happen.  Yet we (and yes I mean me) often go around attempting to explain concepts and ideas to others without considering the other person’s “value system” or worldview and then frustrate ourselves (or get angry)  if they don’t understand.

#2 While it might be tempting to consider ourselves superior if we identify with one of the upper levels, that is probably a sign that we aren’t as elevated as we want to believe.  According to the experts, every level includes every other level below it, so we are all capable of allowing that lower level of thinking to guide us given a particular set of circumstances.

For example, you might typically fall into “green level values” until you lose your job and become unemployed.  If that happens it would be very normal to regress to blue or orange thinking until you recover.  The more “threatened” you feel, the less likely you will be to see the world as a friendly place and will do whatever you can to see (and think) safety. Remember that the spiral is dynamic and that means we are all moving within the spiral at most times.

#3 It is also important to keep in mind that every level has “healthy” and “unhealthy” expressions of thinking.  For example: While many of us who follow SMART Living might consider ourselves at a “green” level of thinking, if our thinking is unhealthy it might be so obsessed with the idea of “live and let live” that we refuse to follow rules even when they are to our and the world’s benefit.  Is everyone wearing a mask even though it’s uncomfortable?

Another example would be someone who identifies as an unhealthy “orange.”  They might be so consumed with the idea of their own achievement, success and wealth that they even refuse to acknowledge that  getting to that position and place in life requires the help of many other people and often comes with privileges—so yes, “Black Lives Matter.”

#4 It’s critical that we remember that it is about “how” we think rather than what we are thinking about.  For example:  both atheists and fundamentalists are thinking at a blue level if they insist that their way is the only right way.

So how do we use this to understand why we aren’t all getting along?  I heard a long time ago that if you want someone to hear and understand you, then you had to “speak into their listening.”  That sounds simple but is actually very difficult to do.  In order to speak into their listening we have to be able to understand and consider where they are coming from before we even open our mouths.  If we don’t respect or at least consider their worldview, then they will immediately sense that and any further attempts are likely impossible.

One thing I really like about the Spiral Dynamics model is that it reminds me to be my best self.  It’s one thing to talk about values and how we need to reconnect with our own in order to understand ourselves.  And quite another thing to see where those values can lead us as we traverse our life journey.   Perhaps the SMART approach is to do our best to honestly evaluate our own level of thinking and continue to reach for higher ways of processing as we adapt and evolve in a constantly changing world.