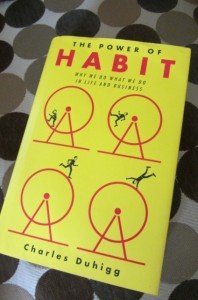 Most of us will admit to having a habit or two.  Some may even admit to having quite a few.  It is the rare individual that will admit that more than 40% of their daily actions are habitual—but that’s true according to Charles Duhigg in his book “The Power of Habit—Why We Do What We Do In Life & Business.”   Like it or not, as humans we are creatures of habit.  However, whether those habits are good or bad—and whether those habits are completely unconscious or purposely planned is largely within our control.  In fact, learning what habits are and how they are created is an important step in creating a SMART life.

Fortunately, most of our habits are relatively benign.  After all, if our brains had to process billions of details every day in order to navigate life it would overwhelm us all.  Instead a portion of our brain called the basal ganglia internalizes our routine patterns and then plays them out over and over in a similar way to cruise control or automatic pilot.  This effort-saving instinct is a huge advantage.  Automatic behaviors like breathing, walking and even swatting away flies, free up our mind and mental energy to find our way in our world.

The habit process that the brain utilizes is actually a three-step loop.  #1 First comes a cue, which starts the brain on automatic pilot.  For example, in the middle of the afternoon you start feeling sleepy.  #2 Next a routine unfolds that is mental, emotional or physical.  In our example you suddenly imagine a latte at the local coffee shop is necessary to keep you upright. #3 Finally, there is a reward, which confirms to the brain that this is a routine worth remembering.  A mid-afternoon jolt of caffeine and sugar is a just reward.  Ultimately, a habit then is: cue, routine and reward over and over again.

Fortunately, according to Duhigg, “habits aren’t destiny…habits can be ignored, changed or replaced.  But the reason the discovery of the habit loop is so important is that it reveals a basic truth:  When a habit emerges, the brain stops fully participating in the decision-making. …So unless you deliberately fight a habit—unless you find new routines—the pattern will unfold automatically.”

Clearly one of the biggest problems with habits is how unconscious most of them are.  As Duhigg says, “Habits emerge without our permission.”  He uses the example that most families don’t intend to eat fast food all the time, they just do it a few times, it’s easy and convenient, and before they know it they are hooked.  This explains why so many of us do things even when we know they aren’t good for us.  Many people routinely drink, smoke, eat junk food, watch too much TV, don’t exercise, etc. etc.  Yet if you ask them beforehand or in retrospect, few believe those actions are desirable.   Still they happen constantly because they are habits.

Perhaps the trickiest part of the loop is what happens once any habit becomes completely unconscious.   Once the cue, routine and reward is set in our mind and the habit becomes stronger and stronger, the brain starts anticipating the reward the minute the cue is provided.  Once that anticipation takes hold, a new pattern of craving emerges.    As Duhigg says, “This explains why habits are so powerful:  They create neurological cravings.  Most of the time, these cravings emerge so gradually that we’re not really aware they exist, so we’re often blind to their influence.”   In fact Duhigg believes that it is cravings that drive our habits.

So if habits are driven by cravings, it is critical that a person discover what sparks a craving if they want to change any habit.   Actually, according to Duhigg it is impossible to erase a habit.  Our best bet is to keep the old cue and reward—but change the destructive routine.  For example, over 20 years ago I used to smoke cigarettes.  I knew they were unhealthy, but I was stuck in the habit.  Every morning one of the first things I would do was crawl out of bed and have a cigarette and a cup of coffee.  When I finally decided that I would quit—I replaced that routine with walking.  Every morning first thing I would put on my walking shoes and head out the door. Pretty soon that became my routine instead of reaching for a cigarette.  The pleasure of walking replaced the pleasure I got from cigarettes. Frequently when you change one part of a habit you can change the entire pattern.  FYI—25 years later I still walk every morning.

Duhigg provides plenty of examples of how a person can learn to change any habit.  To start with, a person must decide to make the change.  And while there are certainly steps people can take, it isn’t a quick and easy solution.  Think about it, if a habit forms because we’ve gradually slipped into an unconscious pattern, then it will take at least as long to change it to something new.   Once the decision and commitment are made, there are the four steps he describes in his book:

Interestingly enough, habits are equally evident in business and cultures.  Not only does our government rely on habits and patterns of behavior, every marketing firm in the country is pouring millions of dollars into researching how and why we do what we do.  Once advertisers know our cravings they can influence us to do what they want us to do.  If that isn’t reason enough for us to get more conscious and explore our habits, maybe it should be.

Of course, keep in mind that understanding how habits work can also help us to establish good and healthy habits.  If we want to start eating better, exercising, practicing gratitude or compassion or dozens of other beneficial behaviors, any of those can become habits when we create  a cue, a routine and a reward (triggered by a craving).  Plus, there is evidence that any one good habit has a ripple effect on similar areas of our life so the benefits are enormous.

Finally, Duhigg makes the case that in order for a person to be able to change or replace a habit—they must believe that they can change.  Using examples from the success of AA (Alcoholics Anonymous) to football players, Duhigg says, “For a habit to stay changed, people must believe that change is possible.  And most often, that belief only emerges with the help of a group.”

Habits are not the bad guy.  They actually fulfill a very important role in our lives.  However, if we turn over all the automatic processes of our lives without taking the time and energy to analyze between those that serve us, and those that work against us—we are slaves to our habits.   Instead, with effort our routines can help us to create the kind of life we say we want to live.  Habits then, become our friend and lead to living SMART 365.