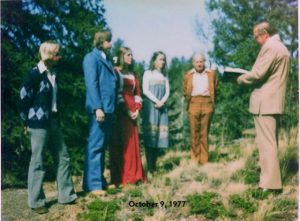 Nearly 40 years ago, in early October, Thom and I got married in the mountains of Colorado. Although the air was briskly cool, the sun was shining in the bright blue sky. Standing in front of a small wooden cabin surrounded by pine trees, we repeated our vows to each other in front of the seven people in attendance. I can vaguely recall being utterly in love with the young man standing next to me. And optimist that I am, I never doubted we were taking the next, best step for our relationship. Still, never in my wildest dreams did I imagine I would look back after all these years and recognize the gift that my marriage would become. While I realize that Thom and I have shared a great deal of good fortune along the way, a big part of our happy marriage can be boiled down to four simple (but not always easy) elements of an extraordinary relationship.

#1 Like each other as much or more than you love each other. Before Thom, I had never had a man friend. Growing up without brothers or any close men in my life, I unconsciously viewed men more from a hormonal perspective than much else. In contrast, when Thom and I first met we spent hours talking about everything conceivable. Not only did our thoughts coincide on millions of things, he listened to me and seemed to enjoy my thinking as much as I enjoyed his. That talking, sharing and spending time together made him a dear friend, long before he became my lover. By recognizing and keeping our friendship front and center, our love has evolved and grown side by side.

A couple of years ago Thom and I were on vacation in Oaxaca Mexico. After a wonderful dinner in a quaint restaurant, we were walking back to our apartment holding hands and talking about our incredible day. Just as we were about to enter our apartment, a young couple approached us from across the street. With his arm draped around his girlfriend, the young man asked us, “Excuse me. You seem to be very happily married. Would you please share your secret with my fiancé and me?” 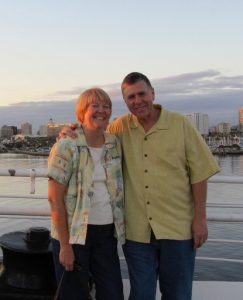 He still cracks me up!

Wow! What do you say to a question like that from a sincere but complete stranger? While I was still mulling it over in my mind, Thom said, “She has to be your best friend.”

I could tell the young man was completely caught off guard. And while I can’t remember how he responded exactly, he implied that he already had a best friend and it wasn’t her. I could see the look on her face when he tried to explain how important his man friends were to him. Clearly, defending those friends took priority. It’s hard to say what happened to that couple but I’d like to hope that he did some serious soul searching before they were married. Sure, a marriage can be reasonably happy if you just stay friends and lovers. But if you want an exceptional marriage, keeping the person you are married to as your “bestie” is a key.

#2 Continue to respect and appreciate each other. I think it goes without saying that if you don’t respect and appreciate the person you want to marry—then don’t. Just don’t. While you might have a few logical reasons to go ahead with it, if there is any doubt in your mind about whether he or she is worthy of your respect, that pretty much answers the question as well.

Right from the beginning, I recognized qualities in Thom that I admired. His quick wit and humor made me laugh. His generosity and kindness with others touched my heart. His self-confidence, good sense, and ambition appealed to my optimistic nature. His curiosity about all things, his desire to learn new things, and his love of adventure inspired mine. Yes, I found him attractive, but even more importantly, I felt an irresistible connection with his mind and heart.

After all these years I still see those qualities in the man I married—those and many more. Yet, how many times have we all observed others talking about all the deplorable things they dislike about their spouse. Really? It’s bad enough when the person being discussed isn’t present. But far worse is when the person does it loudly for all to hear right in front of his/her spouse. As the relationship expert John Gottman repeatedly says, two of the most destructive elements to a relationship are constant criticism and obvious contempt. If you don’t respect and appreciate the one you are with, best to just end it now. 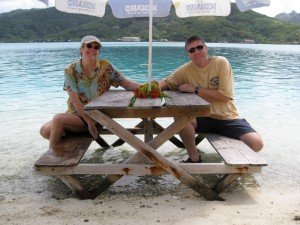 Celebrating our 30th Anniversary in Tahiti

# 3 Make your relationship a true partnership. Thom and I got married before either of us had anything to guard and protect. Right from the beginning we threw it all together and shared everything—money, possessions, dreams, possibilities, and challenges. Making things even more of a partnership, we started and ran several of our own businesses through the years. Eventually, we both ended up in different aspects of the real estate field—but even there we both studied, learned and shared different sides of the same industry.

When I started writing, Thom became my biggest fan who continues to supply me with many of my ideas and also helps me with my books. My work is enhanced because of all that he adds to the mix. Meanwhile, Thom has become successful in commercial real estate, but he is always the first one to admit that my support, my input, and my help is a constant contribution to that outcome. Ultimately, when we work together as partners it benefits us both, and the relationship itself.

Of course, as with any business relationship, there are naturally compromises or tradeoffs. But behind it all, Thom knows that he comes first in my life and there is no doubt that I come first in his—no matter what. He celebrates my triumphs and I never neglect to rejoice and celebrate his. Anyone who wants an incredible marriage must work to make it an equal and supportive collaboration.

#4 Make sure you share the same core values and beliefs about the world. In the beginning, Thom and I realized that we shared many common interests and ideas about the world. But not all. Believe it or not, I was raised by my father to be a Republican. While I may have voted a few times in ways that now make me blush, I confess that I voted the way I did because I wasn’t that aware of what I really believe. Meanwhile, Thom who started out as an Independent is amazed at how progressive I’ve become through the years. But behind it all, is how we share the basic value of honoring and supporting all people regardless of their race, sex, religion, or station in life. Freedom and choice are fundamental to us both. That is sharing core values. 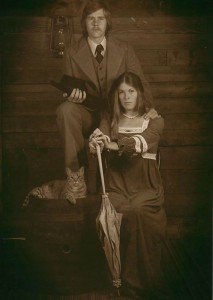 Another core value was our decision not to have children. Thom was very clear when we got together that he did not want to be a father for a number of reasons. Me? I wasn’t committed one way or another. What I did know is that it was far more important to me to have an extraordinary relationship with my spouse than to have a child. I made that decision and have never regretted it.

As I said above, I am well aware that Thom and I are different people. Yet behind it all, we are in alignment about what really, really matters to us both. While I can appreciate that others have different values than mine, I can’t imagine linking my life with them—let alone finding the deep happiness and fulfillment that my marriage provides.

A couple of years ago an article about marriage appeared in The New York Times written by Tara Parker-Pope. There she wrote about a study done by Brigham Young University where they discovered that nearly 77% of most marriages could be rated as ‘ambivalent.” In other words, most of the time those marriages weren’t that bad, but they weren’t that great either. Only 23% of those marriages studied could be considered “mostly positive” for both parties in the relationship.

When Thom and I got married forty years ago one thing we were very sure about was that we didn’t want to have an “ambivalent marriage.” Both of us had witnessed our parents take that route, so we vowed to one another that we would end it if that time ever came. Fortunately, 40 years later we not only love each other far more than we did so long ago, but our relationship is anything but ambivalent. While I am sure I don’t have all the answers for what makes a perfect marriage, surely it is SMART to look to others who exemplify the type of relationship you want and then make your choice.

Okay, your turn!  Are you happily married?  Can you add any tips that have helped your marriage thrive?  Please comment below!