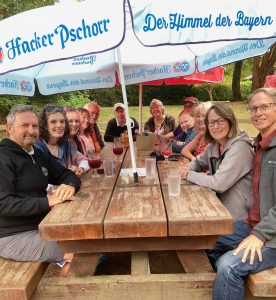 Two weeks ago, when I published a post about our summer adventure, I featured a few of the gorgeous sites we witnessed along the way.  Besides enjoying and appreciating cooler temperatures, we were awestruck at the beauty of nature that combined ocean, rivers, streams, forests, trees and scenic vistas.  But something has occurred to me in the weeks that have followed.  And that is, no matter how beautiful the scenery, what I remember most vividly are the people we meet and connect with on the way.  So rather than provide you with yet another travel log of our trip showing some of the sites, this time I’m talking about the people.  Besides, if you really just want to see the sites, simply follow me on Facebook. 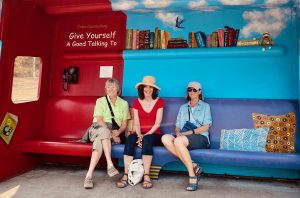 When we first began planning our trip months ago, we knew we wanted to drive somewhere cool and spend several months.  While there are certainly several options in the U.S. that are lovely and cool during the summer, we had something else in mind.  For a while now we had talked about joining our friends, and fellow bloggers back on Vancouver Island. Plus, friends that we met over 30 years ago now lived in Kelowna (about 250 miles east of Vancouver City.)  At the time (way back in December 2020), it seemed like a perfect way to avoid the summer heat by spending a month on the Island and a month in Kelowna.  Of course, that was all decided before the Delta Variant of COVID got involved. 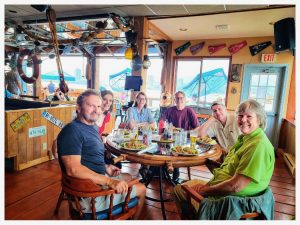 Of course, as an optimist and even through the Canadian/U.S. border was closed to all nonessential travel, I was hopeful that it would open by the time we planned to arrive.  After careful discussion with friends in both locations it was determined that August was the best time to be on the Island, and Kelowna was wonderful in September.  Surely, everyone everywhere would be vaccinated by then, right?  Wrong!

I’ll spare you all the boring details but let’s just say it wasn’t all that easy.  We ended up forfeiting our first eight days at an Airbnb on the Island and the requirements to gain entrance to Canada on the 9th was a bit of a tap dance.  Yet, in spite of the excessive heat on the west coast and dodging smoke and wildfires along the way, we arrived at the island, ready to settle in and experience life as a part-time, semi-retired digital nomads.  And guess what I learned?  What makes a trip especially sweet is the people we gather with as days go by.

So that’s the big message in this post (in case you were wondering what it was!). But for those of you who are like me and like obscure facts and statistics, a survey done by Big 7 Travel asked people about their Bucket List Destination.  The survey reported that countries with naturally beautiful scenery or world-famous landmarks came out on top.  Specifically, 22% wanted white sandy beach while 52% said iconic cities.  As far as I could tell, no one mentioned visiting friends or loved ones as a bucket list destination.

Interestingly enough, the survey said that people were more likely to add a 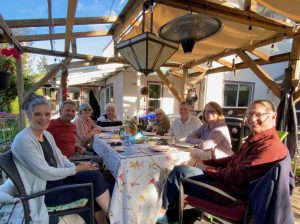 destination to their list if they saw it on social media.  Plus, they claim that 33% research their holiday destinations on their Instagram feed.  But what I found even more intriguing was that the average number of destinations on a bucket list is 11 with most people hoping to visit at least seven of them during their lifetime.  Why not all 11? Again, no mention of friends or other people, although I don’t know specifically what the actual questions were in the first place.

One thing I learned about myself during this trip is that I have a strong preference for gatherings that include meals and conversation.  Yes, I love to walk, ride my bike, take excursions and consider myself fairly active, but given the preference I would nearly always choose to have a coffee, lunch, dinner or happy hour with interesting people talking about a variety of subjects. Sure, I like to talk about blogging, writing or travel—but there is no end to other topics I like to discuss.  (If you’ve been reading this blog for long you know that too!) I clearly prefer to have my social gatherings

the social, and my physical activities by myself or as a couple.

Proof of this is in the photos I’ve included.  Before crossing the border, we stayed a few nights in Sequim WA with Thom’s cousin, Garland and his partner Tom. There we had dinner with another cousin named Dwayne that Thom had not seen since he was a kid. 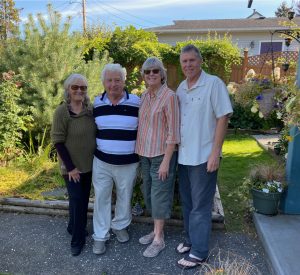 Also traveling to Vancouver Island from California was Janis (from Retirementally Challenged) and her husband Paul.  We didn’t travel up the coast together but we did cross into Canada back-to-back on August 9th.  Once on the island we met up with friend and fellow blogger Donna (Retirement Reflections) and her husband Richard.  Completely unexpectedly, we met the landlords of our vacation rental, Doug and Linda who turned out to be fantastic hosts.  Not only did they enjoy good conversation as much as us, they invited us (and all our other friends) to Happy Hour and dinner on several occasions on their large outdoor patio.  We now consider them friends for life. 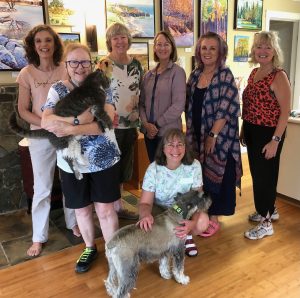 On one occasion, Judith (from Dr. Sock Writes Here) put together a meetup for including me, Donna, Janis as well as, Erica (from Behind The Scenery), Deb (from the Widow Badass), and Ann (from the Unretired) for a hike and then a gathering at her house.  Afterwards we invited spouses to join us for dinner.  Unsurprisingly, all our husbands included got along famously.

There were also several gatherings with just the women and one or two of the couples.  Looking back, it made our three weeks go much too fast.  An additional pleasant 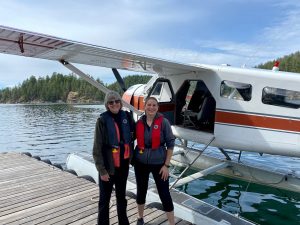 surprise was connecting with the seaplane (called a floatplane in Canada) pilot named Shannon. We spent two and a half hours with her as she shared a view of the small islands around Vancouver Island that few people get to see.  Priceless.

Now that we are on the mainland and in Kelowna, we have already had three dinners, two long e-bike rides, several walks along the waterfront and a handful of great conversations with our longtime friends Deb and Kenn and their friends (and now ours) Amanda and Derek.  And we haven’t even been here a full week.  Who knows what connections we will make in the month ahead?

Over and over the doctors and news sources say how important it is to stay socially engaged in these times. I’m happy to say that despite the difficulties of getting to Canada, what I will remember the most is all the people we spent time with.  Perhaps the SMART perspective is to make sure that when planning any trip (including our Bucket Lists) we remember to include old and potentially new friends.  And as the author Tim Cahill says, “A journey is best measured in friends rather than miles.”