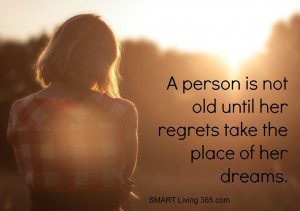 A musician friend named Rudi Harst wrote a song titled, “Shoulda, Coulda, Woulda.” It’s both a catchy tune and a great reminder that feelings of regret can hold us back from living a happy and fulfilled life. But I suspect that one reason why the song makes us laugh and wince at the same time is because we all wish on some level that we could do one or two things differently, that we’d made at least one other choice along the line, or that we’ve neglected to do something we wished we had. Still, what I’ve discovered over the last couple of days is that regret isn’t one of those negative emotions like fear, shame or jealousy that has little or no redeeming value. Instead regret can serve as a signpost for pointing out choices and changes that can help us lead a SMART and happier life—365.

Interestingly enough, regret is a little tricky to define precisely because it isn’t just an emotion. While regret elicits an emotion, it usually comes along with a judgment or appraisal of something—in other words a choice. In countries like the U.S. where we have a great deal of personal freedom in education, work, and relationships, those choices can lead to feelings of regret. In countries where choice and options are limited, far fewer feelings of regret are reported.

More interesting facts about regret comes from Happify.com which claims that 90% of people (in the U.S. at least) admit to a major regret about something in their lives. Regrets can also vary at different ages, and whether you are a man or a woman. For example 44% of women have romantic regrets while only 19% of men share that feeling.

Other facts suggest that regret is most detrimental to seniors and can lead to depression and illness. A big part of that is because many elders believe it is too late to change. Fortunately, younger adults usually feel they have plenty of time to avoid and alter many of their regrets.

Another fascinating tidbit about regret is that it can occur both because of something a person does, or because of something a person didn’t do—in other words, either from our actions or our inactions. According to Thomas Giloviqh and Victoria Husted Medvec from Cornell University, “Actions produce greater regret in the short term; inactions generate more regret in the long run.”   Beyond that Giloviqh and Medec report, “The most common regret of action was to “[rush] in too soon.” But, “When people look back on their lives, it is the things they have not done that generate the greatest regret.” In fact, over the long-term, inaction is usually regretted 75% more than regrettable action.

But there is good news. Harvard Healthy Publications explains that regret can be useful no matter what our age when faced directly. The four main benefits of regret are:

Because we can learn from regrets, it is extremely beneficial to recognize our own blunders and those of others. The book, 30 Life Lessons For Living by Karl Pillemer, Ph.D. offers five suggestions that can help us avoid such regrets. Pillemer interviewed 1,200 senior Americans, average age 78, and they offered the following advice:

Another set of “experts” come from palliative care nurse and author Bonnie Ware in her book, The Top Five Regrets of The Dying. They are:

According to Happify.com a few current regrets are:

Regret doesn’t have to be something we deny or pretend never happens to us. Instead, regret can be a wake-up call where we realize we’ve made a decision (or two) that is leading us away from the peace and happiness we crave. In fact, if we are still alive and able to read this, we can start right now following the expert advice that I’ve shared above. Letting go of our regrets might not be easy, but the SMART thing to do is to allow it to redirect our lives toward greater happiness, purpose and peace.

Your turn:  Has regret taught you anything that helps you be happier today? Please share in the comments below.