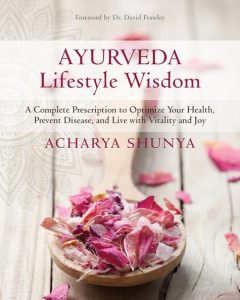 I first heard about the practice of Ayurveda from Deepak Chopra back in the early 90s. Just as Chopra’s work became internationally recognized, we attended a three-day workshop and then read many of his books. But even though much of his spiritual and practical insights came from that five-thousand-year-old system of health and healing, I never really understood much about it. So when offered a review copy of a new book written by Acharya Shunya titled, Ayurveda Lifestyle Wisdom I was intrigued. I was especially attracted by the subtitle of, “A Complete Prescription to Optimize Your Health, Prevent Disease, and Live with Vitality and Joy.   Clearly, Ayurveda sounded a lot like living SMART 365.

The author of the book is a woman born and raised in Ayodhya, a city in the north of India. There, under the training of her grandfather, a renowned spiritual teacher Baba Ayodhya Nath, Shunya inherited the ordained lineage of her family. Embracing the authority and scholar of the Vedic sciences of Ayurveda, yoga and Vedanta, Shunya has become one of the most well-known teachers of Ayurveda in our county. Not only does she train others at her school in Northern California, she also speaks regularly at colleges and conferences around the world sharing the wisdom of this ancient way of life. 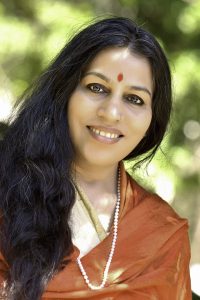 So what is Ayurveda? The source literature of this lifestyle wisdom reaches back to the Vedas (written in 4500 BCE) and translates from the Sanskrit language as, “the knowledge of life.” According to Shunya, “Ayurveda is a science of conscious living,” and it, “teaches a lifestyle that, when lived, prevents disease and optimizes health and well-being.” Like all holistic teachings, Ayurveda puts a focus on our natural wholeness by combining our body, mind, and spirit in everything we do.

Unfortunately, Shunya is concerned that since the 16th century most teachers of Ayurveda put the majority of focus on the “prescriptive model” of health and disease much like Western Medicine. Many practitioners today attempt to merely fix problems or diseases rather than address the underlying cause within the lifestyle of the person. Shunya instead says, “I deliberately bypass the paradigm of disease management and, instead, focus on evoking health of body and mind through lifestyle teaching, plus personal empowerment through connecting with a disease-free, ageless higher Self as the underlying reality.”

At its core, Ayurveda is a state of well-being in balance with nature and life itself. It includes the physical body, the senses, the psyche and the spirit.   Within that balance is a major focus on three areas of health: sleep, sex, and food.   Sounds fairly simple, doesn’t it? But if anyone thinks that Ayurveda can be understood and mastered after a short period of time you would be wrong. Fortunately for anyone who really desires a deeper understanding, this book is filled with detailed instructions to get you started.

Just to give you a taste, here are seven of the most interesting things I discovered about Ayurveda that just might make you interested enough to want to learn more:

Am I going to take up Ayurveda in the future? I was pleasantly surprised to see that some of my existing daily practices are similar to some of the suggestions offered in the book. But even then, I found it interesting to read other ideas about how I might regularly incorporate more of them. Most especially, I appreciated the heavy focus from the book on how we are not only physical beings living in a material world, but at our core, we are spiritual beings.  Ayurveda blends the spiritual and physical together in a very balanced way. That harmonious blend, along with the combination of the natural world of seasons, sunlight, and nighttime remind us that health, happiness, and well-being go hand-in-hand.

Ayurveda is a reminder that we all live with an “abidingly healthy nature.”   And for anyone who is in search of living in a more SMART, joyful and masterful way, Ayurveda just might offer a path worth exploring.

Ayurveda Lifestyle Wisdom is scheduled to be released on Feb. 1, 2017