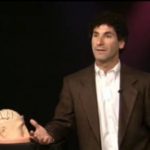 Is the human brain considered plastic?  Yes, but unfortunately many people don’t know it.  And, even though science now proves that the brain can structurally and functionally reorganize itself, many of us still live our lives as though we are stuck with whatever nature or God provided.   Instead, ongoing studies now show that not only does our brain change in size and function throughout our lifetimes; certain areas compete for specific territory within the brain verifying a “use it or lose it” quality.  For those of us who want to continue to embrace the best life has to offer, we’d be wise to continue to grow our brains on a daily basis.

There’s a very valid reason why most of us don’t know that the brain is so plastic.  That’s because until the mid-1900s most scientists believed that the brain was a complex machine.  If one part wore out, broke down or was damaged, no solution existed.   This idea of a machine-like brain was considered genetically predetermined or “fixed” and incapable of much change throughout a person’s lifetime.   Even those scientists that admitted that there was a growth period for a child’s brain refused to acknowledge that growth beyond childhood was possible. That fixed way of seeing the brain called “localizationism” also applied to the senses like seeing, hearing, taste, touch, smell, and balance.   And as happens with many scientific discoveries, even though there is now irrefutable proof that the brain and senses have an unexpectedly plastic nature, many refuse to accept the data.

What are some of the more exciting aspects of such knowledge?  A book entitled The Brain That Changes Itself by Norman Doidge, M.D. is a good place to start if you care to learn more.  Doidge offers dozens of stories of people with severe brain damage and malfunction who have learned to re-train their brains dramatically and function well in the world.  If people with extreme trauma can learn and readjust, there is a tremendous opportunity for all the rest of us.  While there is still substantial evidence that young children have a superior learning period for brain growth, there is equally compelling evidence that the ability of the brain to continually reinvent itself occurs for an entire lifetime.  In other words, all of us have the ability to learn and grow our minds for as long as we are alive.

But there is a downside to brain plasticity.   Because our minds know how to reorganize both size and function to rehabilitate itself, it “competes” for space within our brains.    Not only will it atrophy if not used, but it will also give more and more “territory” to the thoughts and experiences that are most frequently encountered.  For example, the reason it is so difficult to learn a new language as we age is that the brain area for language has been taken over by our native tongue to a large extent by the time we become young adults.  Children learn languages easier than we do because there is still room in their minds (especially in the language area of the brain).   Adults then must practice and focus much more when we get older to force our brains to allow the new language a space in a full brain.

Wonder why we have so much trouble breaking a bad habit?  Again, the use it or lose it aspect of brain plasticity asserts itself in this area as well.  For example, say you’ve wanted to exercise more to fulfill a New Year’s Resolution.  Unfortunately, your old brain map has become rutted with all the excuses you’ve used in the past to avoid exercise—and pretty much taken over any brain territory that might have been available to introduce a healthy and energetic you.  To now change—and yes you can change—you will have to concentrate and create new brain areas/maps in your mind to develop the new habit.  The good news is that once your new habit has become routine, your brain map will now consistently remind you of that new routine and help you stay healthy.

Norman Doidge explains it by saying that we used to think of our brains, “…as a container and learning as putting something into it.  When we try to break a bad habit, we think the solution is to put something new into the container.  But when we learn a bad habit, it takes over a brain map, and each time we repeat it, it claims more control of that map and prevents the use of that space for ‘good’ habits.  That is why ‘un-learning’ is often a lot harder than learning…”

Obviously, there is a lot more to learn about our brain as a living, growing aspect of our physical selves.  But if we start out knowing that we can grow and change our brains to create a happier and more meaningful life, then we will be off to a great start.  In the days ahead, let’s all know that any habit that we want to change can be changed with effort.  Let’s also know that we can continue to learn and develop for our entire lives—and as long as we use it, we’ll never lose it!

So often time it happens, we all live our life in chains, and we never even know we have the key.  ~The Eagles, “Already Gone”

“Imagination is everything. It is the preview of life’s coming attractions” – Albert Einstein