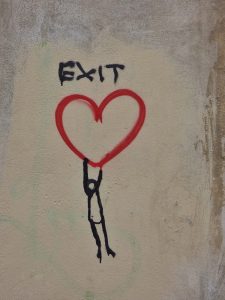 Last week a fellow blogger and friend wrote a blog post about parental financial planning  in retirement.  Much of the post seemed focused on what he himself had inherited and what he and his wife planned to leave their children upon passing.  It’s probably no surprise that most of the people who left comments offered their version of same thing.  The article got me thinking about my own life and how I see the issue differently.  That could be because I have no children. But perhaps more importantly, it raised questions in my mind about the expectation of inheritance, as well as the need to address and consider how well any of us are prepared for those end-of-life experiences that none of us will avoid.  Like so many other topics, I don’t have any answers but I think it is SMART for us to be thinking about and be willing to consider our own personal exit strategy for when the time comes.

I’ll agree that it isn’t usually easy to think about.  Yet my “inner-planner” would be remiss if I didn’t at least write about it in broad strokes.  I remember my father didn’t want to even discuss it although he had cancer and had been given only a year or so to live.  But because I had read the horror stories of other families, I suspected that much of how it would unfold when he passed would fall upon my shoulders.  So I continued to ask. Eventually he told my older sister and me that he wanted everything split evenly regardless of personality or need—he was German after all.  No, he never made a will, but fortunately his assets totaled less than $100,000 so probate (in California) was not required.

Around the same time Thom’s mom and dad passed on without leaving a will either.  Looking back on both my parents and Thom’s I wondered how common it was for people to never create a will or living trust.  Sadly, according to AARP, it is very common when people are younger to not have one  (64% Gen X and 83% Millennials).  However even 42% of boomers  and 17% of the silent generation haven’t gotten around to it either.

That got me wondering why.  Why is it such an uncomfortable action? Do people hope they are invincible and it will never happen to them?  Does having money or not having money have anything to do with it?  Interestingly enough, a Gallup poll from 2016 did a survey of people who did not have a will and narrowed it down to income, education and race.  It turns out that in 2016  Caucasians were nearly twice as likely to have a will as nonwhites.  At the same time, a person with a post-graduate degree was twice as likely to have a will as a person with a high school degree or less.  While the difference in income was also relevant, it wasn’t as large a discrepancy.  None were asked about net worth so that wasn’t compared.  But my takeaway is that  the need and the desire to leave an inheritance to our children (or anyone) and/or the need to be prepared comes from a more privileged position that not everyone has available.

At the same time, that makes me wonder about whether an inheritance is for the benefit of the children or the benefit of the giver.  I think it was a point of pride to my father to give all his children about $12,000 each when he passed.  Yet neither Thom nor I had any expectation.  Frankly we considered it a huge gift that none of them became a difficult burden or required special assistance from us at the end of their lives.  That’s especially true when I read that according to the Insured Retirement Institute, 45% of baby boomers have no savings beyond their retirement accounts and even that is limited.  In the future, just having enough money to live on to the end of our lives without “being a burden to our children” might be the best inheritance parents can offer.  Sadly we’ve all heard of examples of how that isn’t always true.

At the same time, we have a distant family member who was raised in a very wealthy family who repeatedly let everyone know (who cared) that when the time came he would inherit a great deal of money.  He was actually a pain to be around as you might imagine.   Unfortunately, unscrupulous money managers swindled all his inheritance just years before his long-anticipated retirement.  That’s when he fell into deep depression and seems to have lost his will to live.  Surely planning on inheritance when nothing in this world is guaranteed does a disservice to any child?

Of course I can easily understand how parents might want to help their children as much as possible when they see the need.  My parents did the same for Thom and me.  When we were young and needed some money they loaned us the money which we gradually paid back (with interest.)  We appreciated the help when offered and looking back that was just one of the many lessons my father taught me about responsibility and debt that I think many people today could use as well.  What’s the saying? “Give a woman a fish and you feed her for a day.  Teach her to fish and you feed her for a lifetime.”  The biggest inheritance from my father were lessons about life and  fiscal responsibility that serve me still.

A big reason these questions are on my mind right now is that Thom and I recently put all of our assets into a Living Trust.  It’s not like we have a huge estate.  But after witnessing some of the issues with our parents and other people we have observed, it became obvious that having a Living Trust would be the easiest way to handle our assets should anything happen to either, or both of us.  Of course let’s face it, it’s not really “if” but instead, more like “when.”

Again, because we don’t have children, it made us sit down and ask, “If something does happen to either of us, wouldn’t it be easier and more kind to make it clean and simple?”  Who needs to frantically try to figure out finances or where things are kept when dealing with loss?  On top of that, if something happens to both of us at the same time, those same questions apply.  If we passed on without a will or Living Trust then probate would be involved and a portion of our estate would go toward lawyers and even the state if things weren’t clear. We know we don’t want that! It also forced us to ask ourselves, “Who do we trust enough to handle things if we become incapacitated and can’t manage things ourselves?”  Would you want your children or relatives in charge of your assets and your care if the situation would arise?  Would they want to be?  After all, would your unemployed 30-year-old-cousin living in your basement be the one who should make those decisions for you?

I’ll confess that my greatest fear is that Thom would “exit” life before me and I know him well enough to know he’d be a mess without me around too.  While we can’t cover every eventuality, it is comforting to know that we won’t face certain decisions and issues should that happen. We also feel better knowing that anyone that comes after us will have it easier as well.  While we definitely don’t have answers for anyone but ourselves, surely it is very SMART to take the time to address these issues long before they become a reality for those you leave behind.