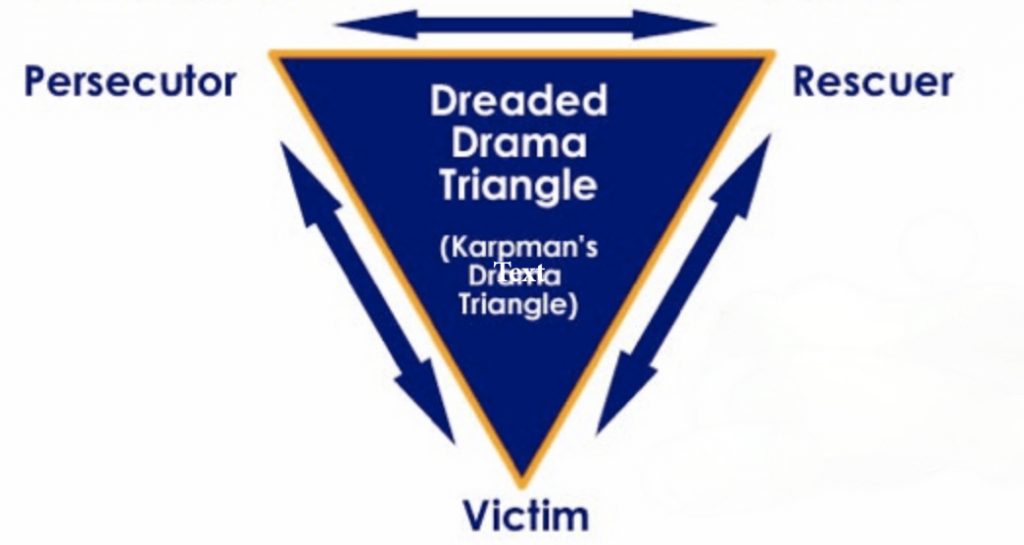 Ever felt like you were in the latest Matrix movie and like Neo, the main character, discover that the world around you is nothing more than a virtual matrix?  Even if you haven’t seen the series of movies, it is enough to know that Neo gradually finds out that like most humans, he’s been kept alive in a pseudo reality rather than seeing and living a “real” life.  I felt a bit like that this last week when I learned about a psychological behavior called The Drama Triangle that is very predominant in 90% of all our lives.  Be it workplace, family, community, nationally or even within ourselves, most of us operate throughout our days within the three walls of that dynamic.  Unfortunately, it is so habitual that we likely have no clue about how it defines us and limits us.  But once we do know we do have the choice.  Like Neo, we can choose to take the blue pill and keep on living comfortably asleep. Or we can take the red pill and start recognizing what roles we play in the triangle and how we have perpetuated the code for our own matrix.

So, what is The Drama Triangle?  Originally described by psychologist Stephen Karpman back in the 1960’s, this triangulation is a social model of human interaction.  Mapping shifting social roles, personal responsibility, and power dynamics in people, it was originally intended to be used to help explain destructive interactions.  However, its implications reach far beyond that into nearly every one of our relationships.

What makes up this triangle?  This theory proposes that in any conflicted or drama-intense relationship there are three roles that people typically play:

I think it is really tempting to think, “Oh I never do that or take on any of those roles!”  But according to drama researcher and consultant Cy Wakeman, every single person in every single day loses 2.5 hours to this type of drama.  While mainly studied in the workplace, people fall into these same roles repeatedly with our family, friends, our communities—and like I said before, even within ourselves.

Why do we do it?  When Karpman originally developed this theory, he had a side interest in acting and yes, drama.  A few of his earliest papers covered this dynamic in fairy tales—specifically, The Little Red Riding Hood.  Think of it, she a sweet little girl (victim) being hunted by the big bad wolf (the villain) on her way to Grandma’s.  At one time the wolf takes on the role of grandma (the rescuer) or another we call the woodsman.  Unfortunately, in the end she is still eaten by the evil wolf.   On further study you can see how other fairy tales like Snow White or Cinderella play out this scenario of Victim, Villain and/or Rescuer.   Sadly, it appears that women are often cast as the victim while the rescuer happens to be male.  Hopefully this is changing. But the point has been made that nearly every relationship drama story in books, television and/or movies contains a classic Drama Triangle.  No wonder it comes so naturally to us all!

From what I discovered after reading and listening about Drama Triangles they are usually a coping behavior that we learned when we are young.  However, I also read that this mindset is largely behind the overwhelming presence of “victim mentality” that appears to be chronic, at least here in western cultures.  Because the drama usually begins with a victim (again this doesn’t apply to anyone being truly victimized) who feels like they are powerless and being taken advantage of, hurt or manipulated by some persecutor, the more it continues. The more people (persecutors) put blame and superiority on other people or institutions which causes victims to look for and enlist a rescuer to help them, the more it is perpetuated.  When do we tend to slip into this triangle?  Every role is triggered when we are nervous, afraid or threatened by someone or something.  That fear causes us to habitually seek the most comfortable role for us individually—be it a victim, a hero or a villain.

What’s at the root of this dynamic?  Like so many behaviors there is a payoff for playing any one of the roles.  The Villain gets to blame others and feel righteous and superior.  The Victim gets to feel validated and avoid any responsibility.  Finally, the Hero gets to feel like a fixer and a good girl/boy who avoids looking at any disfunction in their own lives. Again, one or the other tends to be the most familiar behavior, but each get to be right—and they can switch back and forth and all around.  Also, at the core of each of these roles is a way to avoid personal responsibility for our actions or feelings either within or outside of ourselves.  Plus, on the surface it can be entertaining!

How does this play out inside of us?  If you constantly criticize and negatively judge yourself, you are your own villain.  If you use destructive habits to self-soothe, you indulge in behaviors like overeating, overdrinking or anything that helps you avoid the real issues at hand your goal is to “rescue yourself.”  If you find yourself constantly whining or complaining while repeatedly blaming others for your problems, you make yourself your own victim.  Again, most of the problems that arise from this internal drama triangle are attempts to avoid taking personal responsibility for your own thoughts, emotions, and actions.

The good news is that a healthier empowerment triangle was developed by David Emerald.  It shows how we can begin to escape the drama.  In contrast it proposes: 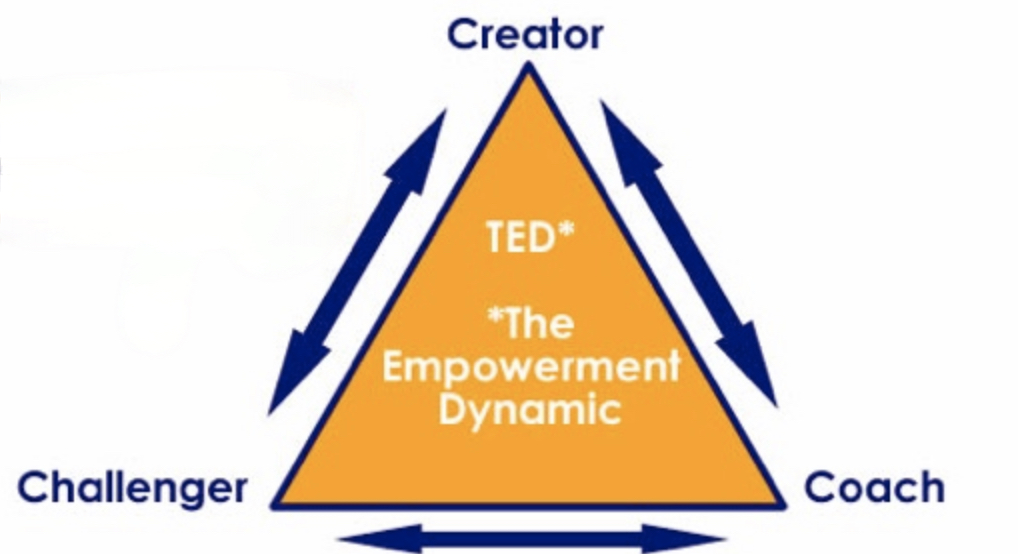 I think it is important to realize that while each of us has a preferred role we typically play out, we all frequently switch roles when it seems beneficial.  For example, growing up I was typically the rescuer attempting to make other family members feel better.  I still sometimes feel responsible for making others happy and “fixing” any unhappy circumstance.  But I am also aware there are times when I can get judgmental, angry, and convinced I’m right (just ask Thom!) Then other times when I feel like certain people are being mean or unkind towards me or life isn’t fair, I turn into the victim.  It’s easy to want to run to a friend and complain or get support, instead of, like in each one of these roles, ask myself what my payoff is is and how am I avoiding responsibility.

No one says it is easy to stop playing out roles or behaviors we have unconsciously used our entire lives.  And it doesn’t matter whether you use drama triangles a little or a lot.  Learning to recognize how they occur in our lives—with our loved ones, at work, at meetups or with our government—increases our own empowerment and self-awareness.  The overall goal is to wake up like Neo and realize that we are far more than any roles we play. Much better to instead realize that we are living in a co-creative world where we can choose behaviors that allow us to live a life that is fulfilled, at peace, and happy.  Or we can pick a drama-filled life that happens “to us” rather than “through us.”  The SMART choice is to remember we get to make it up.