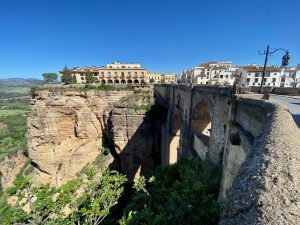 After a great visit in Granada, Spain we rented a car and headed into the countryside.  Our destination was a small town named Ronda which is considered one of the “white villages” of Andalucia, Spain.  It is a lovely little town. (little compared to the other cities we visited) and a welcome relief from the crowds.  As with our other stays, we checked into our vacation rental apartment and walked to dinner.  We wanted to get to bed early in order to get a good night’s sleep before tackling our big adventure the next day–El Caminto del Rey.

The suspension bridge over the gorge.

I didn’t even know about the El Caminito until I began researching Ronda and the white villages in the area.  It is known as “The most dangerous walkway in the world” but I think that title is a bit dramatic now that it’s been completely updated.  Its actual title is “The King’s Pathway.”   It was originally built to provide a pathway for workers building a dam and hydro-electric power plant back in the early 1900s. The walkway is 3 feet in width and rises over 330 feet above the river below.  Eventually falling into disrepair (and after several people lost their lives) in the 2000s, it was closed for over 10 years to completely rebuild and make it secure and safe. 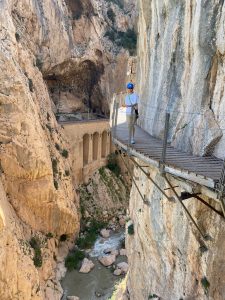 Because safety is a big cause for concern only 600 people per day are allowed to make the walk.  It is also very popular so I bought tickets and was required to pick an appointment window several weeks before we even left home.  Complicating things is the fact that the gorge is an hour drive from Ronda.  The hike itself is over 8 kilometers long and take anywhere from two to four hours to hike.  And bathrooms?  Only one before and one after (and a long line to access both).  Was it worth it?  Absolutely! 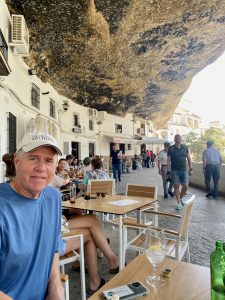 As far as food goes, while the food has been pretty tasty all along the trip, nothing sticks out too dramatically.  BUT…what we have managed to do is to pick restaurants with amazing ambiance.  A highlight came when we stopped in the small town of Setentil de las Bodegas that is built into the side of a mountain.  In fact many of the stores, restaurants and even homes are literally caves.  Yes that is a huge cliff above Thom’s head. 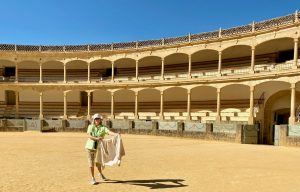 Over all we loved Rhonda and wished we stayed longer.  While there were a number of things to see and do in there, we enjoyed our time in this village very much.  Here is a fun photo of our time in Plaza de Toros, their famous bull ring.

So that’s it for now.  Thanks for following along!