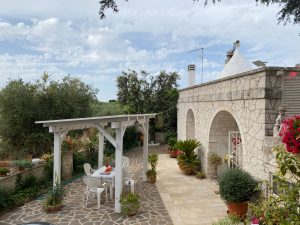 Our most favorite patio so far!

The next step of our adventure takes us to Southern Italy.  We loved our previous trip to Northern Italy a number of years ago, but had never ventured south of Rome.  So, with a desire to experience somewhere new, I started researching the area and decided there was plenty to see.  Ever heard of Puglia?  Neither had I. But our first stop was flying into Bari, Italy which lies on the east coast of the region.  As soon as we landed, we picked up our rental car and headed out of the city to our farm-stay near Locorotondo.  Of course, our plane was late, and picking up a brand-new rental car, navigating an unfamiliar city, and then driving tiny country roads as night drew near to a new destination is just more of the adventure. 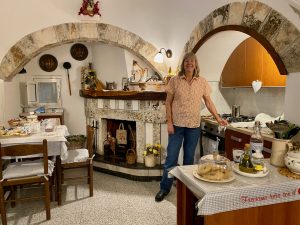 Our kitchen loaded with treats from the landlord on arrival.

Fortunately, the wife of our host was waiting for us when we arrived.  Unfortunately, she didn’t speak a word of English.  However, me with Google translate and Thom with his PocketTalk translator managed to communicate.  This delightful woman left us warm focaccia bread, a homemade custard pie and baskets of biscuits and cookies. Best of all was a bottle of local wine in the fridge.  We then relaxed on one of our favorite patios of all.

After staying mostly in larger cities in Spain we were ready for the country and spent a couple of days just hanging out at our property.  Surrounded by olive and fruit trees it was a perfect place to relax.  And while most of the fruit wasn’t ripe. It WAS cherry season.  So amazing to see trees full of ripe cherries all through the countryside. And yes, our landlord provided us with two big bowls of fresh picked cherries. 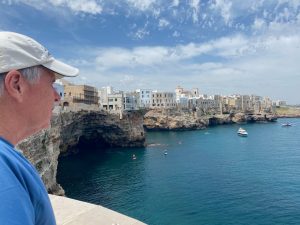 Seaside in Polignano a Mare 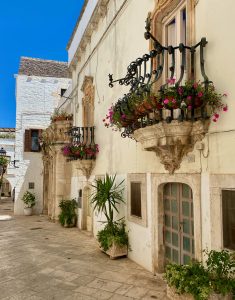 Of course, we had to check out the little town of Locorotondo, which is considered one of the prettiest hilltop towns in Italy.   Another trip was to the small seaside town of Polignano a Mare.  Next was the nearby Alberobello which is famous for its trulli buildings.  Although we were staying in a renovated trulli, and the countryside is dotted with them, Alberobello is the only inhabited center with an entire district of trulli. So, it is considered the cultural capitol of the trulli of Valle d’ Itria.  The history of how and why they were created and still exist is fascinating if you want to explore more on Google. 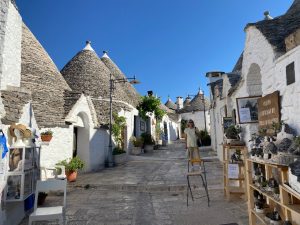 One of the streets in Alberbello 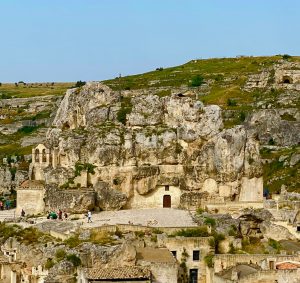 The Sassi Stone Church in Matera. 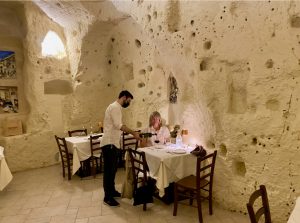 Dinner in a Sassi Cave

We stayed in our farm style trulli for a week and left feeling completely relaxed.  Then on to the town of Matera. Matera is an ancient city and is considered the oldest continually inhabited settlements in history dating back to Paleolithic period.  Why here?  Likely because a portion of it lies along a ravine covered with caves where people lived 7,000 years ago.  The oldest neighborhoods are known as Sassi and are a series of grottos carved out of limestone and hover on the edge of the ravine.  Most are now converted to livable homes, hotels and restaurants but some are clearly in their original state.  Again, the history of Matera and the Sassi is fascinating for those who want more.

I am including a couple of more photos in this post because we saw so much that deserved to be shared!  From Matera we head next to the west coast of Southern Italy.  Ciao until next time!

(Note:  If you want larger versions on the photos just double-click on them!)