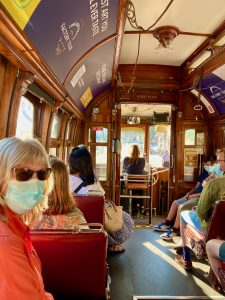 When Thom and I left home three months ago I never planned to write about our travels.  So even though I took my computer with me, I wanted complete freedom to take the summer off from writing if I didn’t feel I had anything to say or share.  But if you’ve been following along then you know that several weeks after leaving home, I challenged myself to write a post that included a few photos and thoughts about our travels up to that point.  Ten posts later, we finally wrap up our trip spending both a week in Porto and a week in Lisbon, Portugal.  Our time in both locations gave us an opportunity to settle into each city and reflect on our trip.  And as usual when our travels draw to a close, we began to look forward to returning to our lives back home.

The city of Porto is in the northern part of Portugal and considered the second largest city in the country with a population of approximately 1.3 million people in the metro area.  But it doesn’t feel that big.  Maybe because it is divided by the wide Douro River as it pours into the Atlantic Ocean only two miles away.  Our vacation rental featured a large deck overlooking trees and the river.  Plus, it was also only a ½ block from the waterfront boardwalk where we could either walk or take the trolley to the busy central district.  Oh, and best of all the weather was much cooler being so close to the ocean. 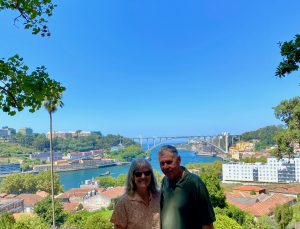 A view of the Douro River and one of its many bridges in Porto. 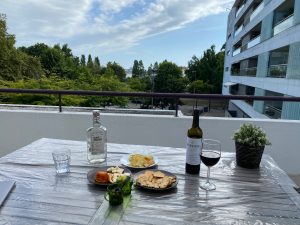 Happy Hour from our patio in Porto. 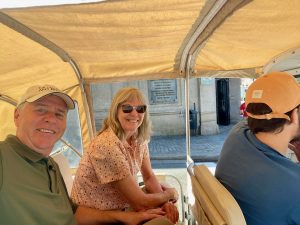 My research told me that a great way to see the major sites in Porto was to take a tuk-tuk tour so that’s what we did.  Our guide Leandro not only showed us around, but he was open to our questions about life in Porto and Portugal.  On another day we took a bus trip (hopefully our last if Thom has anything to say about it!) to the nearby cities of Guimaraes and Braga.  While we did manage to see a few interesting sites and learn more about Portugal, the best thing about the tour was the lunch which included fresh local fish and green wine.  Laughing and talking with our fellow tour participants from several areas of the world made the day worthwhile. 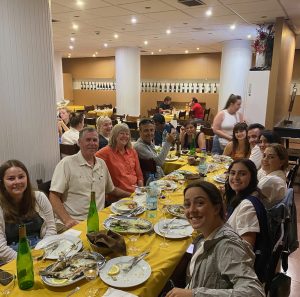 A week later we took the highspeed train from Porto to Lisbon.  There we took a cab to our apartment in the Baixa District.  Fortunately, we were staying on the fifth floor and our apartment had lots of light even though we were in what is considered to be the very heart of the city.  And perhaps because Lisbon is spread out so well, in most cases it didn’t feel as busy as some of the other large cities we have visited. 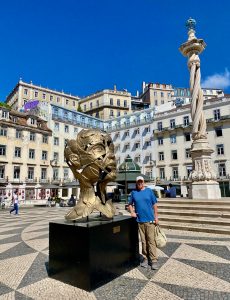 One of many large open plazas in Lisbon 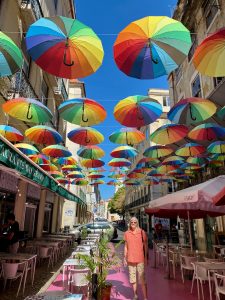 Pink Street in the morning! 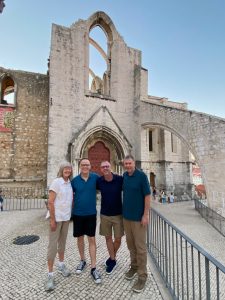 Dinner with a view with Paul and Chris from back home.

Although we did manage to see some of the city’s well-known attractions, we mostly just wandered around and enjoyed our final days in Portugal.  Towards the end of our visit some friends from home, Paul and Chris landed in Lisbon to begin their six-week trip.  We had dinner with them on one night and then lunch another day and caught up with life back home.  Funny how good conversations with friends help to create something memorable no matter where in the world you are.

Several weeks earlier we had learned that one of the legs of our travel home had been cancelled.  Fortunately, we were able to rebook (after three days and three hours on the computer) but it required we leave Lisbon at 5:00 a.m.  to make our other two connecting flights.  But even though we were up at 2:00 a.m. to take a cab to the airport, we kept reminding ourselves of what a privilege it is to be able to be in one part of the world in the early morning and then be sleeping in your own bed that night.  Oh, and we managed to make all our connections along with our baggage.  It was a long, but very good day.

So, this and my other nine posts make up Kathy & Thom’s travel adventures for the summer of 2022.   I so appreciate the willingness of you and my other readers to stick with me as I experiment with writing something completely different from my usual topics.  And while I might “summarize” lessons learned from our 12 weeks of travel, I don’t foresee more travel writing in my future.  Instead, I hope to continue to do as I’ve always done by exploring intriguing new ideas, learning new things, saying “Yes!” to adventure, and pushing myself to boldly experiment with what comes next.  Does that sound SMART to you? Then I invite you to join me.