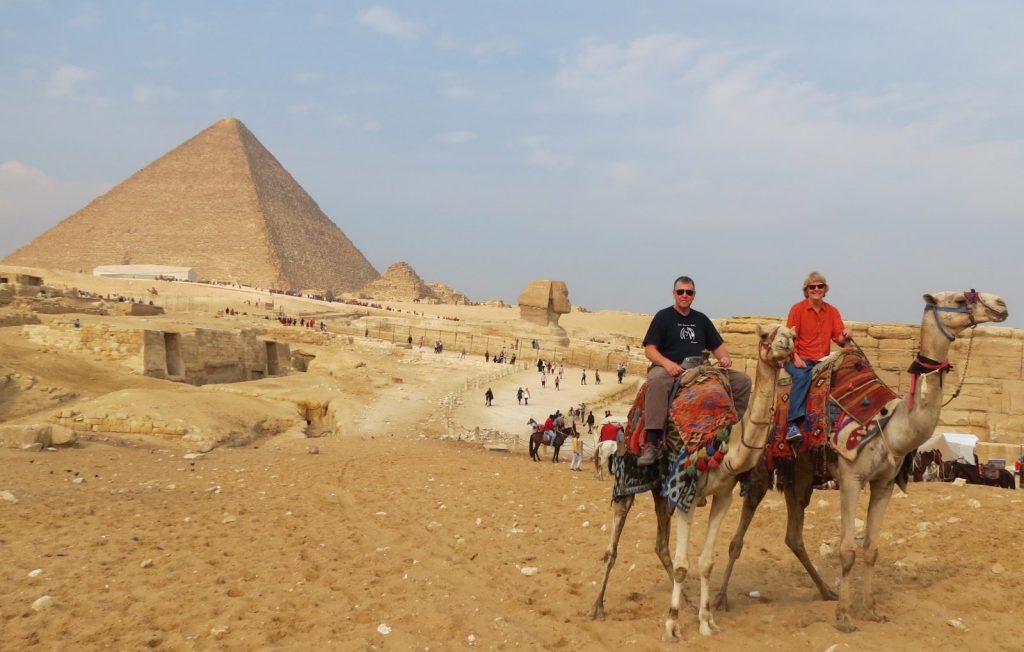 Riding camels around the great pyramids of Giza and the Sphinx.

This weekend I turn 65.  In anticipation of that big milestone, I began planning a trip to Spain and Portugal late last year. We were to fly out of Los Angeles on the 12th of May and, perhaps like many of you, my plans have disintegrated because of the current situation.  At first we were hopeful that we could make the trip later this year. However, as it stands even those plans are too uncertain.  But rather than throw myself a pity-party, I decided that I would go through all of my photos from all my previous trips taken during the last 25 years and pick out the ones that meant the most to me.  And you know what? Just doing that lifted my mood AND reminded me of how very fortunate I’ve been in my life. If you enjoy hearing about travel and don’t mind looking through a few photos, this week’s post is all about that.  My hope is that it inspires you to think back and remember the travel highlights in your own life as well as feel gratitude for the places and people you’ve seen along the way.

Don’t worry though, in the interest of time, I’ve limited my list to my top five trips and the top five WOWs along the way.  While we’ve been fortunate to travel to so many places, these five stick out as the most profound in my life.

#1 Egypt.  When I turned 60 I told Thom (my husband) that I got to choose where—usually it is a collaboration—but not that time.  And as it turned out that trip was the most amazing one to date.  Timing was spectacular because it was a few years after Arab Spring and most American’s were afraid to travel there.  Not only did that allow us to visit all the sites without crowds, but we received extra-special attention.  The country is very dependent on tourism and the people there welcomed us with open arms and did everything possible to make sure we felt safe—and appreciated the majesty of the country.   The people were kind, generous and helpful.  The sites were AMAZING and everything I dreamed of experiencing.  Would we go back?  Oh yes, if there weren’t so many other places we have yet to see.     Note:  Click on photos for captions and to enlarge.

#2  Greece.   This trip was the first international trip across the “pond” that Thom and I ever took.  It was also pre-rightsizing so our finances were pretty tight.  But we scrapped enough together to go with two good friends who told us about a 80’ trawler that accommodated 28 people maximum that cruised around the Greek islands.  No frills but we did have a separate (tiny) room and bathroom, homemade Greek food every day and an interesting group of ten passengers from around the world. Oh and the Greek Islands like Mykonos and Santorini exceeded our expectations for sun-splashed wonder.  After the cruise we did a short tour of Athens, Olympia and Delphi.  Awesome memories that helped to light the spark for more travel to come.

#3 Scotland/England. My very first published book was published by a well-respected small press from Inverness, Scotland, name Findhorn Press. When I read about the publisher and the amazing little destination that spawned their company, I knew I wanted to visit.  Thom was excited because he’d always wanted to see the Eilean Donan Castle.  Plus afterwards we were pulled to the mystical sites of Stonehenge, Glastonbury, and the Chalice Well.  And while we were there we had to visit Edinburgh, Bath and London because, why not?

#4 Mexico. As some of you know I feel I have a special affinity with Mexico. Maybe it’s a past life thing for those of you who believe in such a thing.  All I know is we have taken dozens of small trips by car and flown to many others in the interior.  Yes we’ve visited the beaches there like Cancun and Ixtapa and they were great.  But the most interesting multi-faceted trips have been to Oaxaca, Puebla, Mexico City, San Miguel de Allende and Ajijic.  And did I mention they have pyramids too?  Apparently I have a thing for pyramids because they keep popping up everywhere we go.  I’m so grateful that we were able to climb the Pyramid of the Sun in Mexico City AND the Great Pyramid in Giza, Egypt because that is no longer allowed.  Not only is Mexico an affordable location to visit, the people are wonderful and the variety of sites offers something for everyone.

#5 Tahiti. This final pick was a tough one. We traveled to Vietnam and Cambodia just two years ago and while that was an amazing trip, when I think back Tahiti stands out because it was so beautiful and dreamlike.  While I don’t regret Vietnam/Cambodia, and am glad I went, I wouldn’t go back.  We also loved Italy and Croatia and plan to definitely return there in the future.  But Tahiti was in honor of our 30th Wedding anniversary and a destination we had always dreamed of visiting.  Accompanied by friends, we cruised most of the islands like Bora Bora, Moorea and Huahine and finished the trip by staying a few nights at a beach front cabin on Moorea.  The South Pacific islands are magical and exactly as we had envisioned.

But what about the Wows?  As I’ve written about before, Thom is an easygoing travel mate as long as I follow the big rule:  Only show me the WOWS!  He knows I have a tendency to want to see everything so as long as I focus on WOWS and not run him too hard, he loves letting me plan everything out.  So with that in mind, here are five big WOWs along the way.

I didn’t realize how difficult it would be to choose which trips (or WOWs) meant the most to me because I have truly loved every single one of them for different reasons.  They have helped me mold my view of the world we live in—everything from how we all share basic common needs and dreams, to the necessity of working to help make a healthier planet.  Our plan now is to go to Spain/Portugal in 2021.  But I think it is SMART to remember that we can’t ever take anything for granted, including the people we love or that the places we hope to visit in the future will always be accessible. And let’s never forget to be grateful for the fond memories that will always be with us.