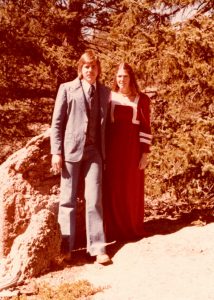 Sorry, but now that I have your attention I must confess that there is no real secret to my happy marriage.  It’d be nice though, huh?  It might also be tempting to believe it is luck.  A part of me admits how very fortunate I’ve been to be in a relationship that just keeps getting better as the years go by.  Surely luck has something to do with it when the same has alluded so many wonderful people.  It’s also inviting to think it’s because I’ve got relationships all figured out. But although I’ve made some great choices, what you haven’t seen is all the road-bumps I’ve/we’ve encountered.  Even so, on the eve of my 45th anniversary, I am gratefully aware of the privilege of living and loving the same human for such a length of time and believe there are a couple of elements that helped to make it happen.

To begin with, before we even got together we both held a strong intention to create an extraordinary relationship. As I’ve written before, each of us came from families where our parents stuck-it-out and never divorced.  While their commitments were impressive, both Thom and I vowed that we didn’t want to settle for that kind of relationship.  We’ve also joked through the years that we would separate and end our relationship the minute it went sour.  And I can’t help but believe that by recognizing the difference between an okay relationship and an extraordinary one has helped us to keep our intention in the forefront of our minds and dedicated to the work it requires.

As evidence of that through the years we have been faced with pivotal moments where we had to recommit to that idea or let it go.  For example:

Another thing that has contributed to our marriage is that we both “experimented” before we married.  So by the time we got together, we both were much clearer about what we needed and hoped for in a partner, as well as what was unacceptable.  Like all of you we have met many people during our lives that ended up partnered with someone who sees the world in a completely contrary way as them. They might have lust or even love, but otherwise they just don’t match. To our benefit, our core values have always been very similar and even though we have grown and changed through the years—we did it together.

We both love to talk.  While I doubt it is a necessary element to a great marriage, I know it has benefited us both.  Even during those times when it is tempting to just walk away or throw up our hands due to a disagreement, neither of us can keep from talking it out.  We also aren’t afraid to share our opinion with each other (that can be good and bad!) so it makes it impossible to keep secrets or not share what is going on inside.  Of course such compulsion can be painful at times, (like much in Life), at other times some of my greatest joy comes from our deep and sustaining conversations.

We care about what is important to each other.  We respect what is unique and special about each other.  As I mentioned above, Thom gave me the encouragement to start writing AND more importantly, to stick with it—even when I had little faith in myself.  I can’t even imagine what my life would be without his vision of me.  And while Thom is self-motivating, I would like to believe that my support and encouragement has helped to make him the man he has become.

And finally, we have made it a habit to do things together.  Obviously, we met each other when we were still quite young and have literally grown up together.   And as we grew, we took steps to create and work side-by side as much as possible.  Because Thom was determined to be self-employed, we first ran a nightclub in North Carolina, then a retail and manufacturing business in Colorado, then obtained real estate brokers licenses where we worked in both sales and our own investments, managed a national real estate conference and lots of other little side hustles through the years.  Even my writing career was tied to his ability to help me promote and produce a product to sell.

But our togetherness was more than work related. We both LOVE to take classes and workshops and have finished and completed hundreds of them in our 45 years.  Some of those classes were connected to work, but most were tied to personal growth and spirituality.  Of course, we don’t do everything together but when you are married to your best friend, our first choice is to usually do it with the one we love.

With all that said, I recently read a short article by the relationship experts, Dr. John Gottman and Dr. Julie Schwartz Gottman.  One of their most important pieces of advice is what they call a “formula” for a successful relationship.  That formula is just a small thing.  In fact, they said, “that’s exactly what a relationship is—not one big thing, but a million tiny things, every day, for a lifetime.” So yes, I’ve listed a few big things that I believe helped to make Thom and I’s relationship as good as it is.  But the last 45 years have been made up of millions of tiny things done every day that added to the depth of our sustaining relationship.

Still, it hasn’t always been easy.  And part of me thinks I’m being extremely bold by announcing to the world that I have such a great marriage when so many people are struggling in the world today.  But like it is said about happiness, refusing to acknowledge or celebrate what is good in our lives offers no hope or possibility to anyone. Maybe the SMART thing to do is for each of us to take a look at the big and little things that have contributed to our happy life—and share it with anyone who will listen.