When I first decided to take a break from my weekly blogging schedule for a month or two, I had no idea how easy it would be.  In fact, except for a couple of times when Thom and I made short video clips (a potential vlog) along the way, I didn’t think about blogging at all.  Now that I have arrived at our first destination here on Vancouver Island, I must admit that I’ve had a few twinges of guilt about not being more productive.  But other than those twinges I’ve been just happily experiencing being a nomadic “sort-of” retired person for the time being.  However, that doesn’t mean that we haven’t taken dozens of photos (along with our short videos) that I decided I wanted to share with any of you who are interested.  So here are a few of the best I thought you might enjoy!

Because it was so hot in the desert where we live (115-120 F) we decided to escape early even though we knew that our destination (BC, Canada) was not yet open to U.S. citizens.  We left home on July 29th and decided to spend a couple of nights in San Luis Obispo. 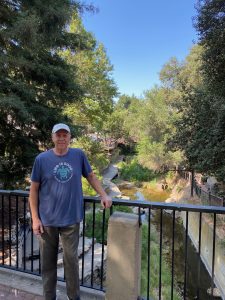 Happy to be cooler 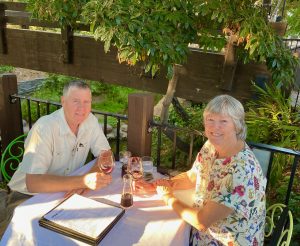 Dinner on the creek inSLO 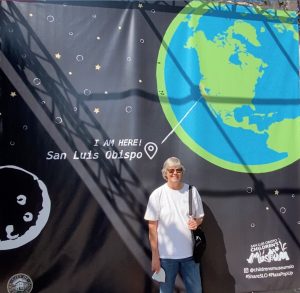 Guess where I am?

Next, we headed up the coast of California, Oregon and eventually Washington.

In all our travels we’d never taken the entire coastal route, so we really enjoyed the scenery AND the much cooler and comfortable temps.  Plus, there was no smoke or fire issues. 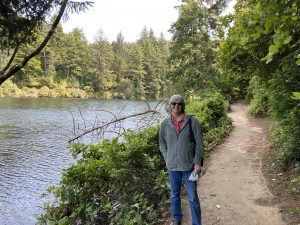 Along one of the many waterways 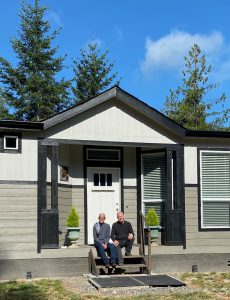 Eventually we arrived at the uppermost location in Western Washington (The Olympic Peninsula) where we stayed with Thom’s cousin Garland and his partner Tom for three days.  While there we did a little sightseeing but of primary concern was planning and getting our COVID-19 tests within 72 hours of being able to enter Canada.  In addition to that concern was news that the Canadian Border Agents were going on strike a few days before the Official Opening Day –August 9th.  Fortunately, they resolved their issues but we still needed to plan and coordinate our day to cross the border believing it could still be quite delayed.

On August 9th we left our hotel room at 4:00 a.m. and drove 30 minutes to the main Canadian Border Crossing into Vancouver.  Shortly after 1.5 hours we, and our friends Janis and Paul, crossed the border.  Then we had drive to the coast and catch a ferry to Vancouver Island.  Despite a few hitches, including a 5 hour wait to get on the ferry, we eventually arrived at our Airbnb in Parksville here on Vancouver Island. 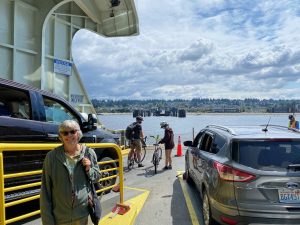 We are thrilled to be here and love our Airbnb—and yes, the weather is everything we hoped for.  For those of you who enjoy reading about other people’s travels, we are still taking tons of photos and will likely share more in the future.  As far as writing goes, who knows?  I have restarted my journaling and will likely write a bit more as days go by.  But this is not goodbye.  Never fear, I will return.   Thank you to those sticking with me and finding something of value in my thoughts (and photos!). Until then…

p.s.  It felt strange turning off my comments but gave me so much freedom not feeling obligated to respond.  But you know what?  I’m going to turn the comment section back on and give myself permission not to respond that way as well.  Yes, in case you can’t tell I’m still learning and hopefully growing on my journey.  There is likely a blog post about that in my future!!