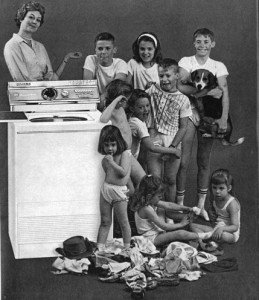 I’ve been interested in sustainability, minimalism and simple living for a long time now. But one topic I’ve seen very little written about is the impact that having children has on both the practice of minimalism and the environment. Like a big elephant in the room, this enormous, but highly emotional issue is almost completely ignored on most simple living blogs. Yet when you think about it, until we are willing to talk about it and examine it from a state of awareness and conscious choice, bringing kids into the world becomes just another cultural norm that the majority unconsciously accepts out of habit and societal pressure. For that reason alone, the big question about whether or not to have children (or add to an existing family) should be on every serious young minimalist’s list of important issues to decide.

Before we get very far in the discussion I suppose it is important for me to say I’m not anti-child. Even though I chose not to have any myself, I do believe kids can be wonderful. However, when I met my husband Thom 40 years ago he was adamant that having children would not be part of his life, married or unmarried. Fortunately for me, procreation was not a priority. I also did not have undue parental or religious pressure to overcome unlike many other young women. I decided then that a deep relationship with Thom was more important to me than giving birth. Together we ended up making the decision that we would marry and co-create a rewarding and meaningful life together that was childfree. Forty years later there are no regrets whatsoever.

With all that said, my life-partner and I are still in the minority, at least in the U.S and U.K. Only 20% of American women remain childfree throughout their lifetimes according to U.S. Census Bureau reports. That figure has doubled from only 10% in the 70’s. With more and more studies being done on the subject, research shows that the obvious freedom that women now have with numerous birth control options comes mainly to those who are educated, have the financial resources to purchase contraception, and are free from a domineering family, religious or cultural community that demands procreation compliance.

But aren’t we (especially women) biologically programmed to want/need children? No. In spite of the fact that our society likes to keep women in a cookie-cutter box that suggests we all feel maternal and want babies, some absolutely don’t want them, and others like me are fairly ambivalent. According to a survey done by Match.com in 2011, only 46% of women who were dating at the time wanted to have children, while 51% of the men said they did. Additionally, Laura Carroll author of “The Baby Matrix” states, “For women, there is no real evidence to support the notion that there is a biological process that creates that deep longing for a child. And the same for men; there’s no real evidence linking biology to the creation of parental desire.”

So if there is no biological imperative that exists, why do so many feel that having children is necessary for a happy and meaningful life? Probably because it is a “fulfillment assumption” that is very important to most cultures. This assumption defined by Carroll, explains that most deep feelings to have a child develop as a learned desire with roots from strong, longstanding social and cultural influences. Carroll delves deeper into the idea by stating that instead of a biological yearning to raise a child, the emotional and psychological feeling that many women and men have is really a craving from within to find something to fill the very human need to create meaning and purpose. She suggests that people ask themselves whether their longing is to raise a child, or is it really just a yearning for something outside themselves that will make them happy? Another question is: What makes me believe (or what institution told me) that I’d never be happy without a child—or another one after that?

Further evidence that not all of us were cut out to be parents comes from the dramatic story surrounding the Nebraska “Safe Haven Law.” Designed in 2008 as a way to allow unwanted babies to be dropped off without prosecution of the neglectful parents, the law backfired. Instead of helpless babies being left, at least 36 children were abandoned in just a couple of months’ time. One father dropped off his entire family—nine children, aged one to 17. Other children came from parents who drove from surrounding states just to leave their unwanted children. Nebraska, realizing their mistake, quickly put an age limit on their new law.

That leads to the first big issue surrounding the question of whether or not to bring children into a life—especially a life focused on minimalism. If minimalism is about simplifying your life to the point where we focus on only those things that bring joy and fulfillment, then asking whether or not to have a child is surely more critical than asking what “100 Items” you should hang onto for the next year? It’s obvious that children complicate life, to suggest otherwise is to be naïve. On the other hand, if life—especially a simple life—is about identifying those things that bring the greatest joy, purpose and fulfillment, then the decision to have a “wanted” child is likely a good one.

So it would be wise to recognize, as economist Andres Oswald says, “The broad message is not that children make you less happy; it’s just that children don’t make you more happy.” A problem only exists if those doing the choosing do it as casually and unconsciously as a couple deciding impulsively to buy an overly expensive house that will shackle them with a big and unmanageable mortgage for the next 18 years—and then want to default when it becomes too much!

The second big issue surrounding the choice is where kids fit regarding the minimalist question of overpopulation and how that affects the environment. Even Leo Babauta, a leading guru of the current minimalist trends and writer of “Zen Habits” has said, “Kids are almost antithetical to minimalism: having them brings new resource consumers into the world…”. He also acknowledges, “Having six children is inconsistent with my message of simplifying, frugality, downsizing, being green.” Yet, Babauta goes on to admit, “I don’t have a defense…I had my kids before (and during) my change in philosophy…I have decided it would be most unethical for me to throw out my children, just because I now believe in downsizing.” To his credit, he is raising his children to want and need far less than most Western culture children and to embrace his lifestyle. Only time will tell whether his children will become typical U.S. consumers or follow in their father’s footsteps.

Obviously raising children to value simple living is desirable if you do decide they are important to your life. But every person contemplating children should first consider what even one (American) kid does to the planetary load. For those who don’t know, Americans constitute 5% of the world’s population but consume 24% of the world’s energy. On average, every one American consumes the same amount of energy as: 2 Japanese; or 6 Mexicans; or 31 Indians; or 370 Ethiopians. Each child an American person has increases their Carbon Legacy by 5 to 7 times.

No matter how well you raise those kids to be environmentally sensitive, if they have children, who have children, who have children, etc., there is absolutely nothing each of us can do that compares to the choice of not procreating. Every single environmental problem facing our world today is related to our 7 billion, and growing, human population and their needs. Until we are willing to look at, discuss, and make conscious decisions that recognize that fact, there is very little we can do on an individual scale that affects the environment to the same degree.

Ultimately, if the current trend of minimalism is to last far into the future, I believe people must consider the question of procreation. If minimalist goals are anti-consumerism, getting rid of the unnecessary, simplification, and conscious consumption, then critical question young people of childbearing age should ask themselves is—how important are children to me, really? Do they fit my lifestyle and am I willing to make other trade-offs that balance out what they offer? Am I doing it because others say that I should? Do I have to have my “own” or can I adopt? What is the real thing I’m longing for when I think I want to have a child?

Our world is changing dramatically and one thing is our approach to having children. Most importantly is the acknowledgement that a wanted, well-cared for and educated child brings tremendous benefit to both the family and the world at large. But just as important, it is time we acknowledge that not every child is intended (about 40%!) and not every parent is capable of providing the type of care needed to raise healthy, happy and well-adjusted children.

When Thom and I made our decision so many years ago, some believed that it was impossible for us to live happy and fulfilled lives without children. I know because a few people told me as much. Fortunately, I am proof-positive they were wrong. Times have changed and now most people are starting to wake up to the fact that unwanted children are a sad commentary on a culture dedicated to more, more and more at any and all cost. Choosing minimalism as a way of life offers a path to a more conscious lifestyle that promotes a “less is more” perspective.  Maybe it’s time we all started thinking about having, or not having, kids in the same light.