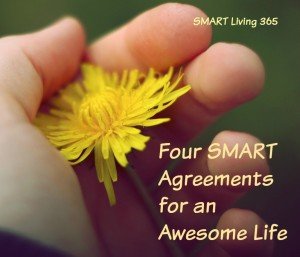 Like millions of other Americans, I first read The Four Agreements by Don Miguel Ruiz nearly 20 years ago. According to Wikipedia, the book sold over 5 million copies in just the U.S., was a New York Times bestseller for over seven years, and has been translated into 38 languages. Not a bad run for such a small book. But in spite its success, now might be a good time to update those agreements from a SMART perspective.   After all, if life is continually changing as Ruiz says, then, “The best path to happiness is learning to change as rapidly as life does.” END_OF_DOCUMENT_TOKEN_TO_BE_REPLACED