“Comparison is the death of joy.”  ~Mark Twain 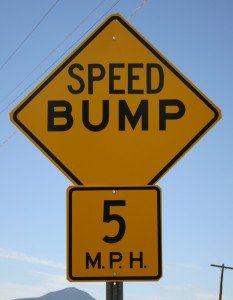 Don’t let comparison be a speed bump in your life.

A few months ago some good friends bought a new house.  After several months of remodeling they finally moved in and Thom and I were invited over to see how everything came out.  It was stunning, as it should be, because my friend is a designer. Everything, from the floor tile, to the kitchen backsplash, to the custom cabinet doors, was stylish and top–of-the-line.   It wasn’t until later when I was back at home that I started asking myself what I should do to spruce up my living room.  How would it look if that wall was painted another color, and was it time for a new couch?  Fortunately after years of working on staying as conscious as possible, I caught myself.   What was most interesting of all was how easily and unconsciously I slipped into comparing my surroundings with my friend’s home.  Even though I love my current home and have no intention of making big changes, my unconscious mind slipped into an automatic routine of contrast and comparison.    That’s when I realized that the seemingly innocent act of comparing can be a big speed bump on the path to happiness and simple living. END_OF_DOCUMENT_TOKEN_TO_BE_REPLACED