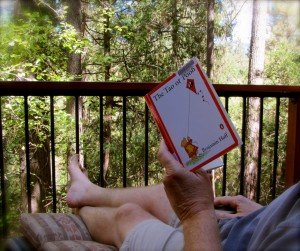 The Tao of Pooh by Benjamin Hoff

My husband Thom is much more of a Taoist than I am.  In case it’s new to you, Taoism (pronounced Dow-ism) is an ancient Chinese teaching originally developed from a book written over 2,500 years ago by a man named Lao Tzu.  Often referred to as “The Way,” Taoism emphasizes a harmonious relationship between nature, humanity and the divine. Put another way, Taoism is a path to simple, SMART and sustainable living.  This year Thom decided to make the book The Tao of Pooh part of his summer reading.  After quickly absorbing the content, he urged me to read it as well. I was surprised to discover that The Tao of Pooh offered both an entertaining and unique perspective on Taoism, as well as a number of simple living lessons that I thought any minimalist might appreciate.
END_OF_DOCUMENT_TOKEN_TO_BE_REPLACED