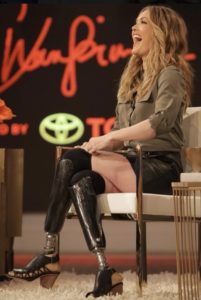 One thing that seems to help people when faced with grief, illness or a hardship of any kind is to discover others who have faced and overcome their challenges.  That doesn’t deny the difficulty, but it does remind us that we are not alone and all of us are dealing with things at one time or another.  And in spite of Social Media, most of those trials are invisible to anyone but ourselves.  It confirms, at least to me, that if other people can meet and graciously overcome their difficulties, then the possibility exists for me as well.  As it turned out, this month’s Book Club selection, On My Own Two Feet by Amy Purdy was exactly what I needed at this time.  Surely if someone like Amy Purdy can overcome her challenges, there is hope for all of us, no matter what we are facing.

I confess that I had never heard of Amy Purdy before ordering the book.  I am not a fan of reality tv so when I learned she came in as a runner-up on one season of the show Dancing With the Stars I wasn’t impressed.  I really only decided to give the book a try because I was told it was an easy read.

It is.  But her story about contracting bacterial meningitis at age nineteen where she hovered between life and death is captivating.  With a two percent chance of survival, Amy recalls a near-death experience where she was given the choice to stay or go. She chose to go on living, with the awareness that no matter what happened, it would all make sense in the end.

Just surviving a near-death experience is bad enough, but Amy’s challenges didn’t end there. Unfortunately, her disease required that she have both of her legs amputated below the knee.  One can only imagine how difficult that realization would be for a young, active and attractive woman.  Making matters worse, Amy lost all hearing in her left ear, her spleen was ruptured necessitating removal, and both of her kidneys shut down requiring a kidney transplant or a lifetime of dialysis.  Fortunately, her father’s kidney was a perfect match and following that operation she was finally able to leave the hospital.

I think when anything dramatic happens to us or our loved ones we sometimes ask, “Why did this happen?”  It turns out that what happened to Amy was rare with no discernable cause.  Yet rather than make herself crazy by trying to figure out the why of it, she offers this advice, “You can spend your whole life questioning.  You can scrutinize every little thing you said or did, every little decision you did or didn’t make.  It’s normal to look back…But ultimately it doesn’t help to keep looking.  Or regretting.  Or berating yourself for what you can’t go back and change.”

Amazingly, through it all Amy stayed optimistic.  Even when her doctors told her that she might need a cane just to walk, Amy decided instead to focus on what she loved doing—snowboarding.  However, to just get started she needed to be fitted with prosthetics and then she had to re-learn how to walk.  With the support of her family and a powerful determination not to feel sorry for herself, she set the intention that she would snowboard again in the upcoming season.  It didn’t matter that no one on the planet had yet accomplished that as a double amputee.

One of Amy’s more powerful proclamations is something she came up with early on.  That saying is, “If my life were a book and I was the author, how would I want my story to go?”  As she confronted herself and her new “legs” she realized she would need to write a new story about herself that included a new version of her legs—and then how and where she would go from there.

I won’t go into her entire story, but not only did Amy Purdy go on to snowboard again, she and her boyfriend founded an organization called AAS (Adaptive Action Sports).  That organization helped her design new legs and feet that allowed for snowboarding as well as be instrumental in getting snowboarding included for the first time in the International Paralympic Games in 2014.  From there she became qualified to compete in those games and eventually earned a Bronze Medal.  Four years later in 2018, she took home the Silver.

Along the way, Amy decided that she would share her story with others to inspire other children and adults who required prosthetics.  Since then she has gone on to do a TED Talk (2011) and also appeared on the Oprah Show.  Besides that, Amy speaks to high school students and groups reminding them that “Maybe instead of looking at our challenges and limitations as something negative or bad, we can look at them as blessings—magnificent gifts that can be used to ignite our imaginations and help us go further than we ever knew we could go.” And yes, Amy Purdy and her dance partner were semi-finalists on Dancing With The Stars in 2014.

Of course, there are likely people who say “…yes, but…” to her accomplishments.  Yes, but she’s young so of course she can overcome that.”  Yes, but my difficulty is much different and harder to deal with.  Yes, but….you fill in the blank.  Isn’t that many of us do when faced with a challenge that we really wished we didn’t have to address?   That’s why her statement, “If my life were a book and I were the author, how would I want my story to go?” is so powerful to me.

A young man singing and playing amazing music in a park in San Diego.

It is also normal for most people going through a difficult time to become myopic.  Far too often we become so focused on ourselves and our own feelings and concerns, that we forget that nearly everyone, everywhere is also facing challenges.  Getting out of our own heads and seeing how others are handling their struggles can be empowering.  Plus, if we reach out and try to help and comfort others, we often find our own issues diminishing and discover strength we never knew we contained.

This last week, the death of my sister and all that entails filled my mind. Meanwhile, Amy Purdy’s story stood out as a reminder that we are all dealing with issues—but we do have a choice about how we want the story to go.  While I can’t change the story for the rest of my family, or for anyone really, I can decide for myself.  As Amy says, “Nearly anything is possible….even when a circumstance can’t be changed, we can alter our perception of it.”  As usual, it’s SMART to remember we always have that choice.

Okay, your turn.  When you are facing challenges does it help you to hear about others who have triumphed in spite of the odds?  Have you ever faced a difficulty so big you weren’t sure you could overcome it–and then did with more strength than you thought you had?  Please share in the comments below.