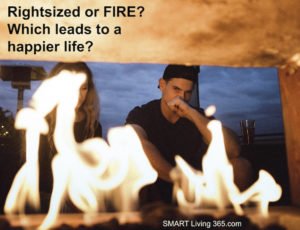 A recent article in Money Magazine pointed out that many Millennials are obsessed with retiring early.  In fact, this growing movement of those in the 21 to 37 years of age are convinced they can do it now, and quietly disdain those who wait until Social Security.  With dozens of FIRE (financial-independence/retire-early) links exploding on the web and on Reddit.com, this idea is drawing in fans like flies. Yet, even though I applaud their desire to get out of the rat race and free themselves from debt, I find myself questioning why so many are convinced that retirement is the ultimate solution.  From my perspective, we don’t need to retire or be completely financially independent in order to live our best life now—but it’s essential we take the time to Rightsize.

For those of you new to this blog or the idea of Rightsizing, let me recap.  Rightsizing is the conscious choice to hone in on everything in your life that you value and brings you joy—and eliminate the rest.  It is letting go of actions and requirements that don’t serve you or those you love and pursuing full-out those things that fill you with passion and satisfaction.  It is scaling back on “shoulds” and “have-tos” and giving yourself permission to live the life you have been called to live.  And yes, part of rightsizing is reducing superficial material items in your life and refusing to get caught up in the rat-race of work and/or consumerism in the attempt to lull yourself asleep or to dull the pain.  As opposed to “downsizing” by sacrificing anything, rightsizing is a forward motion toward your best life now.

Of course, if you haven’t heard of Rightsizing, I can see where FIRE might sound attractive.  According to Money Magazine, many people in the FIRE movement are attracted to the book Your Money Or Your Life published nearly 25 years ago.  That book explained a radical look at stepping away from debt, consumerism and the pursuit of “more” in our society. One of the more popular and important ideas in those pages was that each of us is only given so many hours a day—author Vicki Robin called them “hours of life energy.”  She suggests that people ask themselves, “If you want to buy something, like a $300 coat, and it takes you one full day of work to pay for it, is that coat really worth spending one day of your precious life on planet earth to get it?”

From what I can tell, those in the FIRE groups spend a great deal of time on two pursuits.  First, they scale back as much as possible in order to eliminate all costs.  Going small, tiny or minimal is a fixation.  The second preoccupation is saving absolutely as much as possible for a target date for retirement in the future. Some of the leaders in the movement are convinced that 50% of all income should be squirreled away.  Others suggest that having 25 years worth of necessary living expenses saved is the perfect goal to reach.  So, between never spending money on anything you don’t absolutely need and working to save as much as possible, those who follow FIRE to the extreme seem to be trading their “now” for some golden age in the future.  That doesn’t seem balanced or Rightsized at all!

I get that financial freedom is attractive.  When my husband Thom and I managed to become debt free at ages 56 and 54  it was amazing.  The liberation we felt when we sold our bigger house and choose to scale back in terms of size, location, and impression, was undefinable.  Suddenly we were free to step back from the daily grind that millions of others stick to day-in and day-out.  From that point forward, we gave ourselves permission to make choices determined by our true needs and wants rather than the dictates of society, the judgment of others, or the rules of our environment.

But the thing is, we didn’t retire.  We didn’t need to retire because we enjoyed our work.  One of the biggest objections I have to the FIRE movement is that the fascination with retirement ignores the fact that so many people think they HAVE to work at jobs they mostly dislike in order to make money to save up so they can finally do what they want.  What if instead, right from the beginning, people explored jobs and work environments that gave them purpose and satisfaction? What if we acknowledged that our time is more valuable than money?  What if fulfillment and purpose on the job was more important than how much income it produced?  What if people scaled back on expenses, lived frugally and then gave themselves permission to work at an occupation they felt good about rather than a job they felt paid the most?

In fact, what if we redefined what it means to be a success?  What if people stopped competing with each other—trying to outdo one another with what they own and how they look—and instead focused on living happily with what they do have?  The major reason the vast majority of people want to retire is because their jobs suck the life out of them and they can’t wait to escape.  Instead of trying to escape, why not take the time to “Rightsize” your work so that it fits your personality, your physicality, and your sense of meaning and purpose?

Once Thom and I made the decision to rightsize our lifestyle by selling our big expensive home and getting rid of stuff we didn’t really use or need, the next step was rightsizing our finances.  We just stopped trying to compare our lifestyle to anyone else’s and started aiming towards what it was that we enjoyed doing and being.  Experiences rather than “stuff” became important.  The less stuff we had the more time and freedom to do what we wanted. Time together with each other and loved ones became primary. Our income remained about the same and then we just began parking the excess into investments that brought us passive income for the future.

And yes, we continue to work.  We can retire if we want, but we aren’t certain we ever will.  I can’t emphasize enough the choice to find work that brings satisfaction and fulfillment into your life rather than picking a job based on how much it pays.  I get that finding that kind of work isn’t always easy—especially if you have spent the majority of your life racking up bills and creating a lifestyle filled with stuff.  But most of it is just that, a creation that evolved because we and our society, and even well-meaning friends and family, couldn’t imagine another way.  We settle because we don’t realize we have options. The truth is that most of us don’t need a fraction of the stuff we think we do to be happy and thrive.  Getting brutally honest about what is what is really most important to us is critical.  From there, let’s remember what Vicki Robin asks: “Are the hours of your life energy really worth what you ask yourself to do every day just to own all that stuff?”

I am actually quite optimistic that so many younger people are drawn to FIRE because that shows me that many are recognizing that something is wrong with the current model of our society.  After all, if our purpose as humans is just to grow up, buy as much stuff as we can, work until we can hopefully retire, and then die, is that really worth your one precious life?  I don’t think so.  FIRE is one option but I think there is a better one.  Rightsizing gives each of us our own individual path toward living our best life right now today.  The first and SMART choice is to recognize we have the choice.

Okay, your turn.  Have you ever heard of FIRE before?  How do YOU think it compares to rightsizing?  What do you think is the best thing about rightsizing and how does it fit your life?