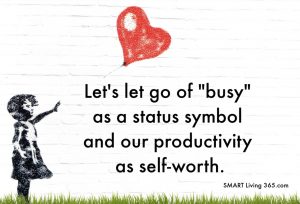 This last week I came down with the worst cold ever.  Don’t worry, this post isn’t about that or what I did to get over it. Instead, once the fog began to clear I started to beat myself up for laying around for over a week and for my lack of any productivity. Rather than practice what I now understand to be self-compassion, I jumped into criticizing myself for too many naps, too much television, and not one bit of exercise.  I even berated myself for getting sick in the first place. Now maybe I’m the only one who ever does this, but ever since then I’ve been exploring how and why I tied my personal value (not to mention my health) to such an absurd goal. What I’ve since discovered is that all too often our sense of self-esteem is a big part of the problem.

Self-esteem?  Yes, it came as a big surprise to me that self-esteem, in the way that we normally think of self-esteem, is thought to be a cause of some of the psychological issues facing many in the world today.  If you are like me, you may remember back in the 1980-90s when raising personal self-esteem became nearly essential for individual wellbeing.  Every mother began telling their child how special, attractive and unique they were from the moment they were born.  Schools encouraged all students to grow a strong sense of self-esteem with exercises and affirmations designed to empower them to get better grades, reduce depression, and reach their full potential. Criticism was downplayed, while abundant praise was heaped—deserving or not. Even businesses offered seminars to increase the self-esteem of their employees with hopes of increasing productivity, job satisfaction and just about every ill that a company faces. Ever notice we don’t hear much about that push these days?

That’s because it didn’t work.  According to Kristin Neff, Professor of Human Development at the University of Austin and author of Self Compassion: The Proven Power Of Being Kind to Yourself, rather than live up to the promise of happier and more successful children and adults, focusing on self-esteem created a new set of problems.  Neff says her research shows that the concentration on growing self-esteem created an entire generation of people who believe they are unique, special and above average.  They now expect their entire lives to be nothing more than a continuation of the same.

So it’s no surprise that after 30 years of tracking self-awareness on college campuses, research demonstrates that students are at an all-time high for narcissistic behavior. Even more troubling is a similar increase in bullying.  When students are taught that they are special, unique and far above average and then don’t feel that way ( and after all, who could feel that way 100% of the time anyway!) they are deeply unhappy and often take it out on others.  Sadly, the more a person believes that they are naturally special and above average, they are sometimes driven to put others down in order to constantly feed that need to feel better than anyone else.  Plus, rather than applying themselves towards an obstacle, these “high self-esteemers” often pull back and don’t even try as opposed to risking failure and exposing how ordinary they are.  Or, as Neff also asserts, they get angry and blame others for anything that potentially makes them feel bad about themselves.

So, instead of creating strong, resilient and honest self-awareness in our children, many were raised expecting to do it all and have it all.  Unfortunately, not only does research now show that the plan was speculative to begin with, there is now plenty of evidence proving artificially building self-esteem doesn’t really work.  Is it any wonder that depression is at an all-time high and narcissism dominates social media?

But lest you think all my thoughts during this last week was spent trying to figure out my faulty self-esteem so I could feel better, you’d be wrong.  In fact, I actually discovered a new term called the “contingencies of self-worth” that also helped me understand my error of linking my lack of productivity to my personal value. What I discovered is that much of the problem comes from what we connect our self-esteem/self-worth to in the first place. Tying it to what I “do” rather than who I “am” is a big part of the problem. And yes, it often comes down to that age-old issue of whether we link our personal value to something inherent, or something external.  If you, or I, believe we are nothing more than our busy, productive selves, then when we don’t do something (by choice or necessity) our value plummets.  That’s what makes it a contingency.

But perhaps even more relevant to these ideas, I also began reading another book (at least attempting to be productive) for an upcoming book club. The book, written by a very successful blogger, author, public speaker, business owner and mother of four children (!!!)  ended up making me feel absolutely exhausted just reading her book. Of course, her primary message was that we, too could be like her, do it all and live the life of our dreams. After all, don’t we deserve it?  Yet, while her words were encouraging and filled with self-esteem boosters, it led me to question why we are all so hung up on thinking we can do it all—and why on earth do we want to?

Fortunately, I found the most soothing answer to come from the work of Kristen Neff in her promotion of the idea of self-compassion.  A big part of her advice is that self-compassion contains three core components.  They are: “self-kindness, common humanity, and mindfulness of suffering.” They remind me that: No, I’m not any more special than anyone else.  Yes, I sometimes doubt myself, I sometimes get sick, I occasionally say things that aren’t the most kind, and sometimes I just lay around all week like a slug because I don’t feel like doing anything else.

Of course, Self-Compassion goes beyond not feeling better than anyone else—in fact, it takes the focus off our own constant self-evaluations and comparisons.  Rather than constantly judging and evaluating whether we are as attractive, as smart, as productive, make as much money, or are as “good” as others—we just admit we’re human—all dealing with the same stuff.  Sometimes we thrive—sometimes we suffer.  From there we can then start being more honest with ourselves about what we do well and where we can improve—without trying to hide the real us from everyone else.  Neff says, “Research indicates that in comparison to self-esteem, self-compassion is associated with greater emotional resilience, more accurate self-concepts, more caring relationship behavior, as well as less narcissism and reactive anger.”

I accept that when I accomplish something I think is important, it makes me feel good.  But it is equally important for us all to remember that we don’t need to “do” things to have inherent value.  Surely doing my best to be a kind, caring and authentic person is enough? Have doubts?  Consider for a moment that if our value was only measured by our production, then we would be little more than mechanical robots living in some form of dystopian nightmare. Instead, like all living things, we have value merely for being alive.

We might also be tempted to believe we would be nothing more than slothful do-nothings if we didn’t drive ourselves to be “more” including more productive.  But again, the kind of world that reduces human beings to needing such negative motivation in order to create beauty or contribute meaningfully to the world at large, is a bleak and pessimistic view of life.

I’m not sure whether self-compassion is the answer to solving all the world’s problems.  But this last week I took the time to stop judging myself, comparing myself to others, and just rested in the idea that I was a human that caught a bad cold and needed the time and space to heal.  Maybe next time you too find yourself pushing to be productive and/or beating yourself for not living up to an impossible ideal, you instead attempt to remember it is SMART to let that go, and just be self-compassionate.

Okay, your turn.  Do you remember the big push a few decades ago where building self-esteem was so important?  Were you as surprised as I was to hear that it not only didn’t really help, but actually led to other problems?  What about self-compassion?   I would love to hear your thoughts on these questions or anything else that comes to mind in the comments below.