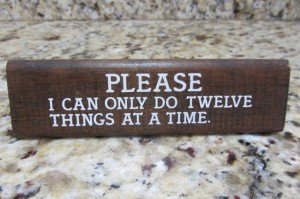 Using humor is always one way to say “no!”

When I sat down today to make up my to-do list it occurred to me that this was going to be a very busy week. And to make matters worse, I had no one to blame except myself. For much of my life I’ve had trouble saying no to people, especially when it comes in areas I think are important. But as I’ve mentioned before, I recently read Essentialism—The Disciplined Pursuit of Less by Greg McKeown.   Not only does the book focus on eliminating everything that is unessential in our lives so we can focus on what really matters, McKeown suggests that learning to say “No” is a critical and courageous step required to do just that. So for those of us on the path to simplifying our lives or those of us who want to live by design rather than default, it is very SMART to learn ways to say No from here on out.

I think it’s important to understand why we say yes rather than no in the first place. Here are nine I came up with:

1) We’re afraid of missing out.

3) We’re afraid someone won’t like/love us

5) We’re afraid others will judge us harshly.

6) Sometimes we yearn for the rush of pleasure we get from the yes—until we actually have to do what it is we’ve committed ourselves to do.

7) It’s often easier (in the moment) to say yes than it is to be courageous and say no.

8) We’re so unclear about what is important to us that we can’t tell if a yes or a no is to our real benefit.

9) We’ve gotten in the habit of just saying yes to what others ask without thinking.

As we can see there is often a great deal of fear in most of our decisions to say yes. Even when it isn’t about fear, most of our actions and choices are grounded in our inability to be very clear about what it is we want to do and experience in our lives in the first place. I’m as guilty as anyone. Even when I’m not worried about someone judging me harshly or missing out on something important, I often find myself saying yes because I’m scattered and distracted about what I should really be spending my time doing.   As McKeown says, “The point is to say no to the nonessentials so we can say yes to the things that really matter. It is to say no—frequently and gracefully—to everything but what is truly vital.”

Okay, so how do we do that? Here are nine ways I intend to practice saying no frequently and gracefully in the near future.

This morning I attended a meeting where a request was made for someone to volunteer to head up a new committee. I didn’t say a word and kept my mouth shut. Meanwhile Carol, another woman at the meeting, spent nearly 15 minutes explaining why even though she would be really good at it, she wasn’t sure if she had time. In spite of that, when the meeting finally finished, Carol agreed to be the new chairperson for the committee.   I can only guess her reason for saying yes, but I’ll bet she’ll soon be wishing she’d said no. Let’s not be like Carol.

According to Greg McKeown, “Essentialism is more than a time-management strategy or a productivity technique. It is a systematic discipline for discerning what is absolutely essential, then eliminating everything that is not, so we can make the highest contribution toward the things that really matter.” In the middle of all that is the courage to create boundaries and say no when necessary. It doesn’t matter whether we are involved in business or merely striving toward a happy life, it is SMART to learn to say no to everything nonessential.

QUESTION:  What is YOUR best tip for saying no to others?  Please share in the comments below!

For my previous article on Essentialism—The Disciplined Pursuit of Less