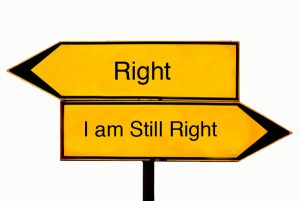 I think if you ask most people, they will agree that being happy is more important than being right. But if that’s true, why do so many of us, me included, frequently choose the opposite? For the most part, we hang on to our ideas, beliefs and perceptions as though our lives depended upon them. Even when it is a relatively minor point like what toothpaste to buy, many of us will clutch our opinions like dogs with a bone. Unfortunately, it is easy to see that the more that we insist we are right, the more we alienate others, frustrate ourselves, stymie our growth, restrict our ability to change, and cut ourselves off from our true nature. So I decided during 2015 as part of my 60-for-60 project, to take a look in the mirror and do my best to let go of being so attached to be right—starting now.

Where does it begin? I think most of us (at least in Western cultures) learned somewhere in childhood that being right was a good way to get love, attention, and reward. Instead of encouraging us to enjoy the process of learning, the majority of our school systems are set up so that being right is “good”, and being wrong is “bad.” At some point, I learned that when I had the correct answer to my teacher’s questions, I stood out in a positive way. If I was mistaken or simply didn’t know, I was ignored or even ridiculed. We all were. That’s why it didn’t take most of us long to realize that being right was a path to love, acceptance and attention.

It only gets worse as we age. If we work hard to absorb the “right” knowledge and then define ourselves as someone who “knows” such things, we get more and more attached to what we know as “right”. Along the way we begin connecting our identity, our sense of safety, meaning, and our ability to control the unexpected, as it merges with our knowing of what’s right as opposed to anything that doesn’t fit our mold.

Of course, the more solidified our thinking becomes, the more difficult it is for us to even be aware of what we are doing. As Kathryn Schultz, author of Being Wrong says, we all fall victim to “error blindness.” In other words, we can’t see anything that doesn’t fit into our perception of the world and ourselves. As Schultz goes on to say, “The miracle of your mind isn’t that you can see the world as it is—but that you can see the world as it isn’t.” And we all do this every day all the time. The biggest problem of course is that we forget we are literally “making things up” and insist that others agree with us.

How do we continue to reinforce our own rightness? Shultz explains it by saying that we first confront people who refuse to believe what we’ve come to think of as fact, by believing they are just ignorant. Surely if they had the same facts as us they would agree we are right? If they don’t change and still don’t recognize our “rightness,” we begin to think of them as idiots. Finally, if they still insist on believing something different from what we know to be right and true, then we surrender to the idea that they are just plain evil. Admit it. Chances are good you’ve thought those things too.

That reminds me of a story I heard from a friend. My friend who I’ll call Nancy was at the airport before her flight when it was announced that her flight would be delayed. Trying to make the best of it, Nancy went to the airport store and purchased a water and a small bag of Famous Amos Chocolate Chip Cookies. She jammed them in her oversized purse and then went and found a seat, got settled with a book, and began reading.

Almost immediately a man came and sat right next to her in spite of the fact there were plenty of other seats nearby. Nancy did her best to just ignore him and kept on reading. But to her amazement, the man grabbed her bag of Famous Amos cookies sitting on the ledge between their chairs, opened the bag, and started to pull one out. Seeing her surprised look, the man actually paused, extended the bag in her direction, and offered her one of her own cookies!

Nancy didn’t trust herself enough to say anything she was so riled up. So pursing her lips, Nancy quickly reached into the bag, grabbed one of her cookies and immediately returned to reading her book as she angrily munched away. From the corner of her eye she could see the man shrug and then grab his own cookie before gazing out at the throngs of people passing by. Before long, he reached back into the bag, pulled out another cookie for himself and once again extended the bag in her direction as an offering. And so it went without a word between them. One by one they both ate through her bag of cookies, with her seething with indignation, and him remaining nonchalantly calm and detached. Finally, the man crumpled up the bag, nodded his head in her direction before rising and walking down the terminal.

Nancy was furious. No wonder the world was in such a bad state! Not only had a man basically stolen her cookies right in front of her, he didn’t even have the courtesy to thank her for them. Realizing her anger and the cookies had made her thirsty.  Nancy reached inside her bag and her hand closed around, not the bottle of water, but a bag of Famous Amos Cookies. Yep, all the time she was rigid with anger at a stranger for eating her cookies, he was being generous, kind and gracious in spite of her obvious hostility.

Our sense of rightness does that to us. It blinds us to what is really going on around us and convinces us that our perspective is the right one and most everyone else knows less. Many people believe that it’s our “ego” that wants us to be right most of the time, and they certainly make a good point. But I’m starting to believe that it just might be my ego trying to protect and keep me safe in an uncertain world. After all, if I am right about most everything, I’m also in control and bad things won’t happen to me, right? Sorry! Even if it were possible to be so right that nothing bad ever happened to anyone, that would have worked for someone by now. But to make matters worse, we just keep trying to be right until it becomes such a habit that we aren’t even aware of it anymore.

Not only does not being right NOT keep us safe from uncertainty, it also has a few other downsides. The most obvious problem is we become extremely inflexible and close-minded. When we are afraid to be wrong or make mistakes we never try anything new and become calcified. We are terrible listeners, we are less creative, less happy, and much, much less fun to be around. Don’t we all know someone who thinks they know everything there is to know about every subject?

Let’s face it—most of us are terrified by not knowing. We’ve arrived at a place in our lives where we are deeply attached to what we think we know, and the more successful we’ve been then we’re likely more attached to it than ever. Having someone disagree with us, or admitting that someone else knows better, asks us to realize that we don’t really know as much as we think we do.

In some ways wanting to be “right” is just another case of perfectionism. Again, it’s about feeling safe, in control and in charge of what’s going on around you. And as Brene Brown says, “Perfectionism is a defensive move. It is the belief that if we do things perfectly and look perfect, we can minimize or avoid the pain of blame, judgment and shame.” Wanting to be right and have others agree with us, like perfectionism, “…is, at its core, about trying to earn approval.”

I’ll admit it again—I like to be right. But now that I know much of that feeling is really an attempt to feel safe, in control, and win approval from others, I can watch out for it more consciously. Then next time I catch myself asserting myself defensively, I’m going to pause, take a breath and look at what belief or perspective within me is being challenged, what I’m afraid of, or if something within me needs to change. Only with such a SMART awareness and desire, can we ever know we are okay whether or not anyone else agrees with us or thinks we’re “right.”