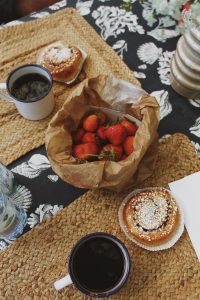 Have you ever wondered why Scandinavian countries continue to show up at the top of all surveys and research done on happiness?  Especially when you consider that for much of their winters they have very little sunlight and temperatures are freezing.  Still, over and over those countries demonstrate that the people who live there rate highly in what most researchers call “subjective wellbeing.”  So even though that environment is near the bottom of my personal list of where to live, and I doubt the people there walk around with giddy smiles on their faces, they clearly have something precious and desirable. Is it possible that what makes living there so unparalleled is something called “lagom?”  And could it be that lagom is just the Swedish word for the practice of rightsizing?

Last week I came across the word lagom in one of the Facebook Groups I follow.  A short article explained that lagom likely originated from the time of the Vikings.  It is said that when the Vikings traveled around the region doing their marauding thing they lived very communally.  In other words, they shared equally in all they had.  For example, at mealtimes, they would pass around the communal bowl of food and drink with each person taking only what they needed—and leaving the rest for others.  The word lagom loosely translates to a sense of fairness or moderation, “just right, not too much, not too little,” or “just enough.”

That philosophy of moderation, sharing and fairness lies deep in the Scandinavian culture and permeates every aspect of its residents’ lives.  While globalization is gradually eroding some of the philosophy in younger generations, it is still alive and well and continues to guide the politics and other social systems of those countries.   As proof that such a guiding philosophy has merit and value, the Annual World Happiness Report continues to put those countries at the top of the list.

But what about rightsizing?  When I began examining the values of lagom I could clearly make the connection between it and my definition of rightsizing.  With that in mind I came up with ten ways that the two concepts are similar.

I realize I have a tendency to see most things as rightsized.  But when I learned about lagom and the meaning behind it, I could easily see why it could lead to creating both a happy life for individuals as well as for an entire country.  If a country emphasizes such practices as a way of life, the push to be more, spend more, possess more and so on would disappear—and instead we could concentrate on creating a more balanced and happy life for ourselves and others.

I now have a better idea of why Scandinavian countries rank higher in terms of happiness than other countries around the world—even with long dark winters and very cold temps!  With the attitude of lagom woven deeply into the culture, they automatically rightsize their lives. Perhaps it would be SMART for us to strive to the same in our own.

Announcing!  Want to learn more about Rightsizing?  I am happy to let you know that there is now an audio version of Rightsizing–the SMART Living 365 Guide to Reinventing Retirement available on both Amazon and Audible.   To access the audio book or to listen to a sample (yes I am the narrator) click here!