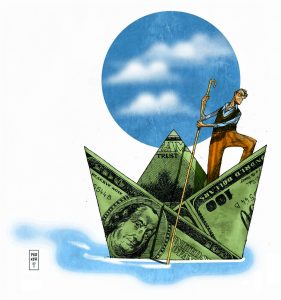 A good friend named Mark recently bought a new truck. To call it a pickup is grossly inadequate. Mark arrived one day in this shiny enormous vehicle with four doors, cushy soft leather seats, a fully digital dashboard with onboard space-like technology, a moonroof that spanned the entire length of both the front and back seats, and automatic retractable step-bars that lower and raise as you open the doors.   I’ll admit I was a bit envious as I looked at my aging twelve-year-old Nissan Murano sitting next to it. But after hearing the “great deal” Mark got by paying only $50,000 for a $65,000 priced truck, all envy evaporated. My Murano is free and clear, still looks decent, and reliably gets me everywhere I want to go. Meanwhile, our family savings sits safely secure in investments that generate automatic cash flow. Instead of envy, I now have pride—pride in the benefits of a frugal and rightsized life.

Yet if you think about it, it’s not popular to go around bragging about being frugal. I know when I was much younger I equated being frugal with being cheap and miserly. My memories contain television shows like Dynasty and Lifestyles of the Rich And Famous as the ultimate in success.   And who can forget the American Dream described as being, “The one with most toys wins?”

But new research by Unity Marketing completed in 2015 confirms the popular book titled, The Millionaire Next Door written by Thomas J. Stanley and William D. Danko back in 1996.   While many in the public believe that the wealthy spend money extravagantly, the research proves otherwise.   The Unity Market report confirms that the majority of wealthy individuals in our country live either below or well within their means. They are careful shoppers and insist on good quality and value. Most drive common brand cars like Fords and live in relatively modest homes under $400,000. Most distinctly, they are aggressive savers.  In contrast, it is the high-income, low wealth people who conspicuously consume the most.

Of course, I don’t know Mark’s financial situation. He might easily be able to afford to buy his truck and see the costs as minuscule. What he buys or doesn’t buy isn’t my business.  But what came to mind was something that I heard over and over again back when I started in real estate. We were told that we needed to buy and purchase a luxury vehicle, regardless of whether we could afford it, because that would entice others to work with us because we would appear successful.   That was thirty years ago, and if anything that idea that a person’s image is more important than the reality of who they are is even more deeply entrenched in today’s American lifestyle. And it is likely a big reason why people are so in debt, stressed out, and struggling in our country.

That led me to recall the article I wrote several weeks ago about hygge. Hygge suggests that being closely connected with friends and family, without trying to impress others or spend money you don’t have, is a key to well being. Many in Sweden and other countries in the Netherlands put a high value on hygge and that contributes to making them one of the happiest countries on Earth.

But something else popped out when I was researching. Another characteristic that helps make the Swedes so content and happy is a common word they use called “lagom.” Basically, this word means “just the right amount.” Sufficiency, enoughness, or “in balance” also fit the definition. In many ways the Swedes live a Swedish version of what I call rightsizing.  It has nothing to do with being cheap, and everything to do with spending money wisely, sufficiently and in balance on those things that truly matter.

According to a John Helliwell, a Senior Fellow at the Canadian Institute for Advanced Research, “In Norway, it’s quite common for people to paint each others houses even though they can afford to pay to have their houses painted.”   Helliwell continues with, “They go out of their way to help each other, and it becomes a social event, and those events are enormously supportive of well-being.” In other words, they aren’t trying to impress others with displays of wealth. Instead, they see common and everyday chores as a way to connect and befriend one another on a deeper level.

Meanwhile, here in the United States, many people seem to prefer a wealthy image rather than an actual state of “enoughness.” Spend any time watching television and we are force-fed advertisements telling us how better off we will look, smell, feel and enjoy by purchasing the product being sold. Perhaps even worse, the majority of television programs imply that unless you are “House Hunting” for a newly remodeled home in an exotic location around the world, coming up with the next big thing on Shark Tank, or dreaming of living as royalty in Downton Abbey, your life has little consequence. Conspicuous consumption is forced upon us as both normal and desirable.

But what if there is another way? What if we started praising the frugal? Instead of admiring the purchase of my friend Mark, what if we started praising someone like my friend Larry. Larry has been driving a used and modest economy car for years now. He could easily afford a more expensive car but because he loves to play golf twice a week, he feels good about offsetting the cost of something he really enjoys by driving a vehicle that gets him where he wants to go.

Or what about admiring my artist friend Carol who creates amazing pieces of art out of recyclables and trash that she finds in the most unlikely places?   She takes great pride in transforming something questionable into something of beauty. What if instead, we starting looking around for things we could do for ourselves? What if we started offering to help others with basic chores and let go of our hesitation of asking others to help us when the time comes?

Let’s never forget that our judgments about what people spend money on, what they own, and how they look demonstrate what we feel is important. If we gush over a person’s extravagant house, car, clothing or whatever, we tell them, our children and ourselves that image and material items are more important than character, kindness, and connection.   When we praise conspicuous consumption we support a culture that supports superficial qualities—rather than integrity and inner value.

What I’ve learned over the course of my life is that living frugally, just like rightsizing, isn’t a sacrifice. Rather, it is learning to focus on what really matters and to find pleasure and enjoyment in more simple and profound experiences often right in front of us.

Since Thom and I began rightsizing our lives six years ago we have gradually shifted our focus away from buying things to distract, entertain, or to fulfill cravings we didn’t know how to fill otherwise.   After all, as author-speaker Abraham-Hicks teaches, the real reason most of us want that “stuff” in the first place is because of how we think it will make us feel. By focusing instead on what we hoped to feel by buying anything new—like a new truck, house, furniture, shoes—we can then decide if the tradeoff costs are worth it.

Is it easy? No, not always. But like any habit, it does get easier. Are we perfect examples? Not hardly. Every day, like everyone else, Thom and I are challenged by the constant pull of advertisements and our own lack of imagination for otherwise fulfilling our innermost needs. But again, the more we all focus on the benefits of a thrifty lifestyle, the easier it gets.   In my opinion, the frugal lifestyle has gotten a bad reputation. Maybe the SMART perspective is to begin to loudly and actively praise the frugal in all that we say and do.