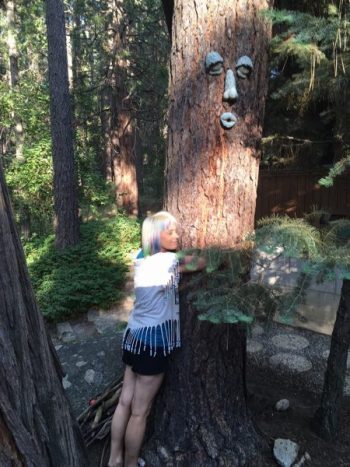 When was the last time you hugged a tree? Believe it or not, I’ve spent the last couple of days doing just that. Remember a couple of weeks ago I recommended that we all spent at least 21 seconds a day hugging someone (or a pet) that we care about for our own physical and mental health? But what about trees? Ever since I finished a book titled Braiding Sweetgrass, the act of connecting deeply with nature has become so much more necessary than I ever realized. So, while I don’t know if any of you reading this will ever be motivated to do the same, I wanted to at least invite you to consider how important that connection could be to both your wellbeing and that of Mother Earth as well.

Several months ago a friend highly recommended a book to me. Because I knew it concerned nature and the environment, I thought it would be a good book to read during our summer stay in the mountains. The book, Braiding Sweetgrass—Indigenous Wisdom, Scientific Knowledge and the Teaching of Plants written by Robin Wall Kimmerer fit perfectly. There is something soothing about sitting outdoors in the shade of trees while reading a book that counter-balances months of sitting in front of a computer with the buzz of air conditioning in the background. While I suspected this book offered far more than just another book about the environment, I was surprised by how it touched me emotionally—and yes, changed how I relate to the living world around me.

As impressive as Kimmerer is as a celebrated professor of biology at the State University of New York, it is her poetic voice and background as a native American woman that makes this book so resonant and wise. Her view of the world, nature and all living things is colored by that upbringing and perspective—and she effectively offers a collection of stories about native history and her scientific knowledge, combined with her own personal insights in a way that make nature and the environment come alive.

Kimmerer said in a recent interview, “Most people don’t really see plants or understand plants or what they give us, so my act of reciprocity is, having been shown plants as gifts, as intelligences other than our own, as these amazing, creative beings – good lord, they can photosynthesize, that still blows my mind! – I want to help them become visible to people. People can’t understand the world as a gift unless someone shows them how it’s a gift.”

Using her love and understanding of Native Culture she explains what we have lost as a society when as a nation we aggressively did our best to eliminate that wisdom and teachings. Not only did we nearly wipe out their language—which people use to think, explain, and find their place in the world—we did our best to separate the native societies from their connection to the land. While the loss to Native Cultures is obvious, the loss to our western society appears even more tragic.

What are some of those losses? Interestingly enough Kimmerer explains how the English language is made up of approximately 30% verbs. In contrast the Potawatomi use 70% as verbs. Why does that matter? Because verbs insinuate something that is alive. Instead of referring to everything other than humans or animals as commodities (nouns) that can be used or abused, the Potawatomi use a grammar of animacy. Animacy sees most things as alive and addresses the living world as family.

Plus, ever notice how we only capitalize nouns that we respect—Kathy, Idyllwild, California—all are distinguished by a capitol letter? Meanwhile, dogs, birds, trees, apples, blueberries are just things to be used or consumed. In fact, when you begin to consider how we use language to indicate life and agency, it becomes obvious that western culture does not see the planet and nature as alive. As long as something remains an “it” we can own, use and abuse it. Instead, when we begin to think of trees as a “her” or a “him,” it changes the way we think about them. And yes, that makes us think of them as alive.

That is just one insight I take away from this book. Another was the constant reference to how our relationship with Mother Earth and all plants and animals is reciprocal. Believe it or not, Native Cultures teach that nature needs us as much as we need her. While that doesn’t seem obvious considering the state of our world today, Kimmerer insists that even if our gratitude is all we offer her, Mother Earth needs our appreciation, respect, and yes love for her own wellbeing. Instead of offering a creation story where humans are “just visiting” a planet until they can get back “home,” Instead, Native Cultures origin stories teach that the planet was created by humans to sustain and nurture one another. Big, big difference if you think about it.

A re-occurring theme in the book is our deep connection to all plants, animals, and the entirety of nature. That “relationship” exists whether we are aware of that or not. She says, “What I do here matters. Everybody lives downstream.” One important way to keep that relationship strong is making gratitude a constant offering. When living in gratitude we focus on the gifts that Mother Earth gives us—air, food, places to live, beauty, one another—and constantly reaffirm that. When we truly live in a state of gratitude we live in a consciousness of abundance where you already have everything you need.

There is so much in this book to share that it is tempting to keep throwing out some of Kimmerer’s gems. But I don’t want to mislead and pretend that this isn’t a challenging book to read. Although poetic in nature it requires a person to pause and consider as you go. Not only did it take me an entire month to read it—once you finish it you can’t help but be changed. Every story she includes is melodic and juicy and takes a while to absorb. And while I rarely get emotional when reading nonfiction, there were several times I finished a chapter with tears in my eyes.

However, although Kimmerer does offer several tragic stories of how our overly commercialized and mechanized culture is working to destroy much of the life all around us, it isn’t a book designed to scare or shame us into behaving. Instead, she returns over and over to relationship, reminding us that we all take care of those beings we say we love. She says, “Knowing that you love the earth changes you, activates you to defend, protect and celebrate. But when you feel that the earth loves you in return, that feeling transforms the relationship from a one-way street into a sacred bond.”

Finally, Kimmerer points out that most of our environmental fixes are just that—Band-Aids to fix something we don’t believe is alive in the first place or something we needs to fix to keep using it. Instead our best bet for our future and generations to come might be to change our understanding of reciprocity, aliveness, gratitude, and relationship to all things on the planet as living beings. While overall it is an enormous task to contemplate, it might be SMART to start by just going outside and hugging one of your sister trees.