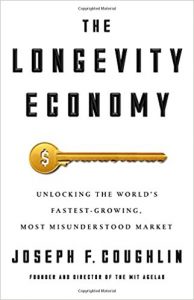 We live in exciting times. Some of that enthusiasm comes after reading the book The Longevity Economy—Unlocking The World’s Fastest-Growing, Most Misunderstood Market by Joseph F. Coughlin. Why? Even though the book appears to approach the topic from an economics point of view, the vision it paints for the coming years is provocative, uplifting and filled with potential for anyone over 50. While no one can deny that we all face challenges on a global, national and even personal level depending upon individual circumstances, the cresting wave of baby boomers signals something momentous. The question is: Are we going to ride the surge or just sit on the sidelines? Are we going to create a better future, or just attempt to maintain ourselves until we die? Those are questions for business, governments and every single person alive today.

The author, Joseph Coughlin is the founder and director of the Massachusetts Institute of Technology (MIT) AgeLab. He is an author, teacher and thought-leader that focuses on how businesses, government, and cultures respond to aging trends and lifestyles. Not only has he completed hundreds of research publications, he has been named by the Wall Street Journal as one of the “12 pioneers inventing the future of retirement.” Anyone interested in aging well and retiring happy ought to be drawn to his ideas. I know I was.

And lest you believe this book is another boring economic book, you would be wrong.  He spends the first part of his book uncovering the myths of aging that our world currently holds along with the birth and evolution of retirement as a concept. He goes far beyond merely calling ageism a problem that we must overcome by addressing the mindset in which it was created. He then covers how and why Social Security was designed and its many evolutions to become the institution it is today. Only after exploring the myths about the past does he address the future—and the problems and the potential it surely contains. In the end, he offers many inspiring possibilities for business, individuals, and governments that one can only hope will eventually become more common as we age.

A primary theme throughout the book is that our very idea of old age is outdated and needs to be drastically overhauled. Unfortunately, most people seem to view our current thoughts on aging and retirement as something that has always existed and inflexible. Coughlin however, repeatedly points out that old age is a “socially constructed, historically contingent, and deeply flawed” narrative created out of the last 150 years.

In fact, that story has become so prevalent that business, our government and younger generations primarily see getting old as a problem to be avoided at all cost. Coughlin clarifies by saying, “it’s a line of thought that can be followed back to the moment at the beginning of the 20th century when society collectively decided that ‘the aged’ was something that required solving. Declaring something a problem is another way of saying that it’s of negative value: that the world would be better off without it.” In other words, society has come to believe that the growing advance of an older population is a “monolithic mass” that is “needy and greedy, always consuming and never producing.” No wonder none of us want to get old!

Another unforeseen and often unacknowledged aspect of this challenge has been the “normalization” and later “glamorization” of retirement. Prior to the early 1900s, retirement was considered bad because the only people who retired were either physically unable to work, or forced to quit due to the American obsession with efficiency at all costs.  To support those nonworkers, Social Security was gradually introduced to those 75 and over. Not only has that age limit dropped throughout the years to 62, now citizens have the choice to draw benefits even while working. That was never something it was originally designed to do. And yes, people are living far longer than was ever imagined at the time.

Those actions helped to engineer the idea that, “retirement” is now “a stage of life” rather than an unfortunate situation. But a downside for calling retirement a “stage of life” is that it continues to reinforce “the idea that older people prefer to be consumers taking support from society, as opposed to producers adding to its strength.” Coughlin goes on to connect how this new stage of life developed as an answer to the “aimlessness of a population learning to define itself in terms of what it bought, not built.” Naturally, business and marketing decided to capitalize on the movement by glamorizing leisure as the ultimate goal for the aged, resulting in a big push for consumerism.

Another interesting fact is that Coughlin’s research shows women approach retirement differently than men. He says in regard to a particular study, “Our male study participants were approaching old age with a fuzzy, optimistic mindset while women were coming to it with a much more precise conception of the challenges in later life. Men were looking forward to a relaxing few decades. Women were planning to grow old. When asked, the top five words that best described their life after their primary work concluded, men said “Retirement. Relax. Good. Hobbies. Travel.” On the other hand, women said: “Fulfilled. Peace. Calm. Accomplishment. Family.” Research also points out that women typically provide the majority of eldercare in our country and live longer than men. In many cases, their view of a long life is often very different than men. For that reason, Coughlin is convinced that “the future will be grey, female, and proud of it.”

Once we arrive at a deeper understanding of how older age has become defined in our culture, Coughlin points out current limitations in terms of new innovation. The majority of businesses are now run by men, young men to be exact, who have little insight into what older people want or need. Even the majority of money to fund new innovation is in the hands of (young) men. Clearly, this current “failure to innovate” shows that in the past “the field of geriatric technology lavishes far more attention on basic needs like health and safety than higher-level needs like the desire for human connection, personal or professional ambition, contemplation, and yes, fun.” Now, with an enormous amount of the world’s financial resources ($5.6 trillion in 2015 alone) held in the hands of those over 50, this enormous (and growing) number of aging population deserves much better attention.

Coughlin also shares numerous stories of epic fails in the marketplace. Who can forget the “I’ve fallen and I can’t get up?” Or what about “senior foods?” Does anyone remember those phones with big numbers that could only call home—neither do most other people! As long as products continue to be made and marketed in an outdated stereotypical view of what old means, people won’t buy them regardless of whether they are helpful or not. He says, “When a product is for ‘old people’ and the user, whatever her age, doesn’t think of herself as ‘old’ she’s not going to buy it.” And yes, women control the majority of household spending.  Only those products designed to make life easier, happier and more fun for all ages, including the growing number of older people, will be the most successful in the future.

Another provocative section explores the success of retirement communities like The Villages in Florida. Even though 87% of people over 65 say they would prefer to “age in place” in their current homes, destinations like The Villages (or Sun City near where I live), are still very popular among those who retire. Coughlin wonders if that is because they “can seem like the only good, reliable option, simply because it’s the most visible choice.” Remember, most existing houses and those being built today are designed for large families in suburbia, rather than an aging population with different needs. So how can we “age in place” when we live in a house (like a two-story) built in the suburbs where we can’t get around?  So if our narrative about old age stays outdated, and without a new agreed on “story” to replace alternative ways of growing older, retirement communities like The Villages can appear “spellbinding.” Coughlin is concerned that senior communities like The Village may continue the old story of aging as needy (people with limitations) and greedy (consumers rather than producers) and further distance future generations and their view of getting older in a positive way.

Is Coughlin hopeful? Yes. The products and businesses that “will succeed in tomorrow’s longevity economy will treat older consumers not as crises to be triaged or puzzles to be solved but as full-fledged members of society with recognizable wants, needs, and ambitions.” He concludes with, “The most important thing about an improved old age will be the simple fact that it will be good to be old.”

Clearly, Coughlin is positive about aging. He repeatedly cites credible sources that state that most people as they age will likely stay reasonably healthy and active throughout the majority of their remaining years. For example, he reports that “59% of people around the world erroneously think that Alzheimer’s disease, the most prevalent form of dementia, is a normal part of aging—(but) dementia is far less common in old age than the absence of it. Even among those 85 and older, two-thirds of people don’t have dementia.” And while he admits that our mobility diminishes as we age, most of the issues we encounter come from lifestyle designs created for people under 30 rather than the inability of people to continue to manage on their own. Again, the past failure to design and plan for this new demographic is a large reason so many people become mobility-challenged at an advanced age.

Like with most books, I can only scratch the surface of all this book contains within this article. But for anyone who is interested in a positive future for our country and our world—aging baby boomers and all—then you might want to read this book. Business and our governments will either conform to the opportunities of this new updated vision of aging—or they will be left behind. And together, in true SMART Living fashion, Coughlin believes, “Best of all, if you make the right choice now, future generations may thank you for it. In building a tomorrow where older adults can chase their dreams, have fun, contribute, achieve meaning—and yes, leave a bit of themselves behind—you won’t only be helping them leave a legacy. The legacy you create may well be your own.”

Okay, how does this apply to your life?  Can you “age in place” where you live right now?  Is your primary goal as you age to “retire” and relax?  Or do you see your longer life as an opportunity to find greater fulfillment?   Please share your thoughts in the comments below.