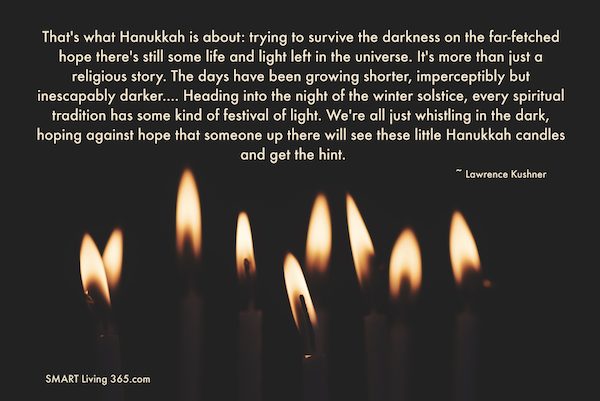 As some of you know, tomorrow December 21st is officially the shortest daytime of 2019 and the longest night of the year–The Winter Solstice.  Then Sunday Evening marks the beginning of Hanukkah, followed by Christmas Day on the 25th and Kwanzaa on the 26th.  There are a few other holidays in there as well but I think you get the idea.  No matter how any of us celebrate, I tend to believe that we, like Lawrence Kushner says in this quote, are awaiting hope, possibility and whatever we call “The Light” to grow stronger. May each of us find it inside and outside of ourselves in the days to come.

This year the Winter Solstice falls on Saturday, December 21st, and Thom and I are invited to a celebration.  I’m not sure what to expect but we’ve been asked to bring a vegetarian dish for the potluck and I’m guessing there will be candles involved.  At first glance the experience might seem strange, but maybe it shouldn’t be.  In a time when many of us excessively celebrate a old man in a red suit who flies through the air on a sled pulled by magical reindeers delivering gifts to kids both nice and naughty, maybe the solstice deserves more attention than we normally offer.  In fact, when I thought about it, I came up with two good reasons all of us might consider celebrating it on a regular basis.

Unfortunately not only do most of us take our connection to the planet and nature for granted, it’s getting worse.  According to veteran wildlife presenter, Sir David Attenborough, our continued disassociation with the planet over the last 60 years is a big cause of the current planetary crisis.  He reports that rapid urbanization has resulted in over 50% of us now living in cities.   Some children have never seen a live wild animal (let alone a domesticated one that they eat), clear skies, undeveloped mountains, or vegetables growing in a garden.  With so many people out of touch with the seasons, with animals, and nature herself, it’s easy to imagine a future where we live in enclosed biospheres that resemble zoos (or jails).  But instead of us placing the animals inside, we’ll be doing it to our children and grandchildren just to stay alive.

What I believe might be important is to acknowledge is that the Winter Solstice has always been a breeding ground of ritual, celebration and connection for all human beings for thousands of years. If we are paying attention, the Winter Solstice can remind us of the mystery, wonder and gift of being alive.  As long as we are not overly attached to believing that our ritual and celebration is superior and exclusive, we can appreciate that all of us have a strong desire to connect to a source of meaning and purpose. Best of all, the shear wonder of the experience can also help us to be humbled and awed by a force so much greater than our limited and tiny understanding.

Another thing I especially like about the Winter Solstice is that it belongs to every single one of us equally.  No matter where you live, no matter what your race or background, no matter your religion, political party, your sex, your age or whether you are rich or poor—this important planetary gift is ours to appreciate and enjoy.  So regardless of whether you plan anything special this Saturday evening,  I urge you to consider that this event is indeed special and deserves recognition far beyond what we usually take for granted—even if all you do is light a candle and remember.