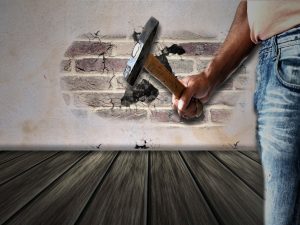 As I mentioned last week, I confess to watching a certain amount of television in my ofttimes.  While I tend to avoid reality programing, I do admit that every now and then I flip on HGTV.  A few of the shows I’ve seen in the past are, House Hunters, Love It Or List It, and The Property Brothers.   Yet even though I realize that these shows are meant as entertainment, I still find my husband Thom and I asking ourselves: “What are those buyers thinking?”  Or even worse, “Who can afford that kind of house—and why would they want to?”  If you have ever watched one of these shows and reacted like us, you might also wonder if the messages being portrayed are actual “reality” and whether the shows should come with a disclaimer attached.   With that in mind, I came up with five SMART disclaimers that I think every program on HGTV should include.

Disclaimer #1 Reality TV is entertainment—including those that feature real estate decisions.  A simple google search will reveal what most of us suspect.  Reality TV is usually just “scripted reality.”   No one wants to call it fake and yes, there is usually a house involved in House Hunters, et al, but the reality is usually different than what is portrayed.  In most cases, the chosen house has already been selected in advance and in some cases already purchased.  Plus, the other homes shown but not “chosen” are sometimes not even for sale.  And as for the script, even when it is the actual words used by the buyers, they often have to repeat what they’ve said over and over to get the right take.

Disclaimer #2:  Becoming a successful house-flipper is extremely hard work with lots of risk. Because both Thom and I have a background in real estate we’ve had several people tell us how they want to become house flippers.  Why?  Because they see on several of these shows that the stars of the programs are making a bunch of money—and it’s fun too!  And while some of the shows frequently throw in a problem that comes up in renovations, they downplay how often that happens and how much it really costs. They also seldom show how long it can take to sell the property even if it is fixed up.  Never forget that every month you are unable to sell the property after the renovation, eats into your potential profits. Plus, precisely because of these shows, it is becoming harder and harder to find a property that you can buy low, fix up without breaking the bank, and then sell at a profit.  If you still want to do it, just be prepared in advance for all the twists and turns that can happen—and have a big bank account to back you up.

Disclaimer #3 Just because a bank says you qualify for a certain amount, that doesn’t make it the best amount for your finances or your life.   Banks are in the business of making money on the money they loan you—duh!  They are not our family or friends.  Instead, a bank will evaluate your income and your previous payment history and tell you what works for them.  Unfortunately, some people seem to think that if the bank says they are “qualified”, that’s the amount they shoot for when home shopping. And shows like Love It Or List It often feature properties that are even more expensive than what the people say is their “budget.”  My advice, from my real estate background, is to always factor what you can easily afford as a monthly payment—including all expenses—and never go above that amount.  That’s never been stated on any of the HGTV property shows that I’ve watched but it would save people a lot of grief if it were.

Disclaimer #4 Buying a home or renovating nearly always takes longer AND usually costs more than tv shows ever.  Of course, the attraction of these shows is that it not only looks like fun—it also looks pretty easy.  Who wouldn’t want their home buying (or renovating) to go like that?  But in the real world, it actually is very complicated to buy a home these days. On an average, buyers look at least ten homes (not three as shown on the programs).  In addition, there are their dozens of details that must then be disclosed and attended to so it can also take months to complete the transaction.  Renovations are similar.

For example, during a recent renovation on our rental home we came up with a workable timeline and ordered everything as scheduled.  Unfortunately, even though everything looked good on paper, until the quartz countertops were delivered, cut and then placed, half of the renovation was on hold.  Like a row of dominos, most renovations are a series that connect.  When one piece doesn’t fall in place, all those that come after are frozen.  Oh, and did I mention that although we estimated our renovation would cost $25,000—it actually ended up around $30,000.  Unlike a 30-minute television show, real life takes time and considerable money.

Disclaimer #5 Watching shows like House Hunters can trigger our “keep up with the Joneses” desires and encourage us to buy and spend far more than we should.   Ever notice that you often don’t need something until you see the commercial on tv or an ad in a magazine?  Advertisers know that much of what we buy is unnecessary but many of us can’t resist the lure of buying something attractive when strategically placed in front of us.  Programs like House Hunters does the same. Even if you don’t want to move and are perfectly happy with the home you have, the commercial advertisers know that you are a target for their product.  That’s why Home Depot, furniture stores and local appliance companies are primary sponsors of shows like Property Brothers.

I tend to believe that many of us forget how susceptible we are to advertising, and how much we frequently compare what we have or don’t have with others.  If our friends have a bigger and nicer home than we do, it is quite normal to start thinking we should have one too.  If we watch shows like House Hunters International where the couple is buying a 2nd home in an exotic location, we start wondering why we don’t deserve one as well.  Comparison is a trigger than advertisers use regularly, and anything that promotes ideas of buying and having something bigger or better is difficult to resist.  Even when we tell ourselves we are only watching for the entertainment value, we must not ignore the seeds that are being planted in our minds.

Like many people, I might turn to HGTV now and then to see what is new.  I’ve watched their Tiny Home Hunters and if anything, it helped me decide that a tiny home is just too tiny for me—no matter how cute they make it look.  I think as long as we do our best to remember that these shows are meant to entertain us, not portray reality, they can’t hurt.  But let’s never forget that although these shows don’t come with disclaimers, there are some things we would be SMART to keep in mind when watching.