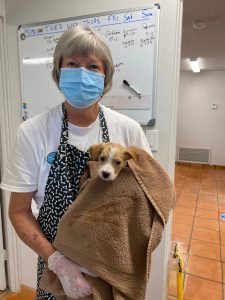 A great amount of validated research proves that volunteering is good for both our health and our longevity.  But unfortunately only about one in four people in retirement  (or 27% of those over 65) actually volunteer in any given year.  Then a week or so ago I had a zoom chat with some friends, all women who are retired, and for the most part none of volunteered or even wanted to.  Each were healthy, smart (if I do say so myself) and came out of advanced creative professional occupations before retiring.  Plus, I know that they are all readers so surely they are aware of the benefits attributed to regular volunteering?  Naturally, that got me wondering why. What would keep any of us from volunteering when it is so beneficial to us?  Here are five things I think stand in the way.

#1 If you google the question the first answer that comes up is that people claim they don’t have enough time.  Even my friends used this as part of their reason for not volunteering.  Before retirement it is a common belief that you will have tons of time available when you no longer have to go to work.  But as just about every retiree I know claims, they are busier than ever.  It’s true that the more active and engaged you are in life, the more that time fills into the available spaces of your life before you know it.  Retirement is exactly the same.

Interestingly enough, people who volunteer before retirement while they are younger and/or still working, tend to volunteer more than those who are older. Stanford Center on Longevity claims that this plays out at 75% more!  So it can’t really be a lack of time, can it?  We all have choices about how we spend our time and why we do what we do so it likely comes down to our personal values, choices and logic.  People who volunteer seem to do it because it is important to them on a bigger scale than just doing it because the research insists it is good for us—and it has little to do with the time we have available.

#2  Another reason people often offer for not volunteering is that they don’t know where to do it.  It’s one thing to know that it can be both “good for you” as well as personally rewarding, and it is another to find a place/situation that fits both your abilities and your personality.  I know personally that this has been a problem for me through the years. I really enjoy volunteering and have benefited from it whenever I have done it.  But after a while when the position either became unnecessary or I “outgrew” it, I found it difficult to find other places that would offer similar benefits.

Interestingly enough, research into volunteering found that the main organizations that volunteers work for throughout any given year are religious in nature.  In fact, 42.7% of those over 65 who do volunteer, do it there.  However, according to a study by the U.S. Bureau of Labor Statics in 2015,   “Volunteering mainly for religious organizations decreased as  education increased, from 52.7 percent of those with less than a high school diploma, to 29.9 percent of those with a bachelor’s degree and higher.”  At the same time, volunteering for education or youth projects increases with education level. Education level also seemed to vary the volunteer activity.  Those with less education were mainly involved in food preparation and distributions.  While those with a high education tended to provide tutoring or professional or management assistance. And perhaps obviously, those with children tended to volunteer in related activities including helping to teach, coach or supervise sports teams.

#3  They can’t find a good fit.  From what I can tell a big part of the problem is that most organizations don’t bother to employ or find a qualified volunteer coordinator. Instead the job is often left to someone less qualified to both identify what is really needed from volunteers and then match and place those who sign up for specific needs and activities.  Rather than just sticking anyone who calls up into whatever slot is open, volunteers would likely be much happier and satisfied if they were matched with a needed tasks.  And chances are good they would stick with it as long as necessary as well. Plus, allowing volunteers to grow, learn and contribute using their unique qualifications is something else that would help keep them happily engaged and in place.

For example, Thom and I visited a local property focused on promoting art in our community.  Not only did they have a beautiful campus and an amazing facility filled with all sorts of supplies and tools to make art, they planned to hold classes and teach children and seniors a variety of artistic ways to create.  We were so excited after our tour that we asked about volunteering. We were told they were looking for a volunteer coordinator who would “let us know” how we could get involved.  That was two years ago.

#4  No one asks them.  I think this reason is a natural consequence of number two and three.  After all if you 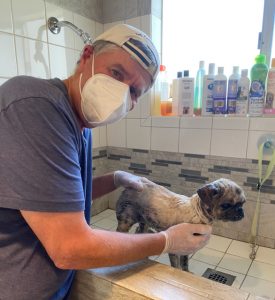 don’t belong to an organization (like a church) or you are struggling to find a place that feels good to you, it take a lot more effort to be the one who reaches out.  I imagine it is similar to dating or finding a job these days. If you aren’t proactive, it likely won’t happen.  For example, because we lost our little dog Kloe this year we were motivated to find a place that put us in an environment where we could be around dogs.  Luckily we found a small facility nearby called Loving All Animals and started volunteering once a week.  Just being around dogs (and lots of puppies!)  filled that space within us missing Kloe and at the same time, helped an organization that needed our help.  But if we had waited for them to call us, it wouldn’t have happened.

#5  Our definition of volunteering could be all wrong.  I came to this conclusion after talking with my friends last week. I heard from nearly all of them that they felt that had spent the vast majority of their lives to this point giving, giving, giving and now it was time to focus on themselves and/or their families.   While me, a self-employed person all her life, I have never had the perspective of working to support myself and my children—or engaged and doing all the many, many things that raising a family requires each day.  I was also never literally required by my superiors (or church) to volunteer or be shamed when not participating.  While my group of friends can’t speak for what men go through, it seems likely that how we as a culture define volunteering and what is routinely expected from most women needs to be reconsidered.

That idea became even more clear when each of the woman began describing some of the things that they do that bring them joy AND offer gifts to the world in many ways.  Their raising of productive and happy children, their writing and blogging, their amazing artistic creations, their caretaking of elderly relatives, and much more.  Just as women have been underrated in the work force if they don’t take on marketable  occupations, is it possible that because many women are so naturally giving and supportive, we don’t “qualify” as having volunteered for as much?  That begs the question:  “If you spend a large portion of your day taking care of others how does that not qualify as volunteering?”  Plus:  “If you create something that doesn’t generate money, why isn’t that considered a valuable contribution to the world that should be counted as such?”

I don’t have any final answers to the questions in number five but it has me asking (and trying to answer) all sorts of related questions in my mind.  After hearing some of the women in my group say they weren’t interested (at all!) in volunteering I didn’t blame them.  It isn’t that they aren’t giving back to those around them or the world at large, it’s that they didn’t count their contributions as worthy and didn’t feel they had the energy to continue to try to fit into the mold of what the world calls “volunteerism.”

I personally know that volunteering is good for my health and the world.  But I now know my definition differs from a more institutional approach. Plus, I have always believed that volunteering is a gift that we offer generously to the world. And as with all true “gifts” they must be offered freely to the world or they are nothing more than a “transaction” we feel obligated to make.  In that light, it’s no wonder some people don’t want to volunteer! Perhaps the SMART approach is to recognize that being a creative and caring person, and sharing that with the world, is perhaps the most generous and giving thing any one of us can do in this life—call it what you will.