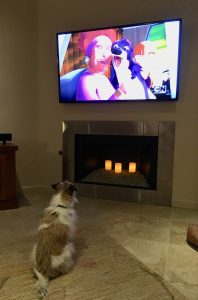 Like I explained last week, I’m recovering from a really bad cold.  I truly wish I was the only one going through that experience, but I know others who’ve had their share of illness as well.  That, or half of the country has been locked in frigid cold temperatures forcing them to stay inside.  So as I previously confessed, I watched a LOT of television during my recuperation.  And rather than fight the impulse to do absolutely nothing, I decided to make a list of some of my favorite feel-good shows to share with others.  After all, if we are going to be watching TV anyway, let’s make sure it feeds our hearts, minds and souls in a positive way.  So here is a list of my favorites.

I’m not really a big fan of situation comedies. I absolutely detest commercials and most 30-minute programs are nearly 50% commercials these days.  Fortunately by using either a DVR or watching the shows on Netflix or others, you can enjoy them commercial free.

As a writer I suppose that makes me pre-disposed to good story lines.  While only a few of these are comedies, I find that they are all heart-warming with “feel good” messages written around good characters.  If you aren’t watching them already I recommend you do (and yes, if they are on cable I also DVR them so no commercials.)

I only watched a few of these movies in the last couple of weeks.  The others are simply favorites I’ve seen in the past and always cheer me up and remind me of the goodness of people.

I will admit to enjoying Syfy and a good detective story.  And I can take some violence as long as it isn’t excessive. However, I do insist that the story line and premise is intelligent.  Once a person is feeling better and enjoys quality television, fitting a few of these into your schedule can be fun.

According to the Nielsen rating system, adults over 18 typically watch an average of five hours of television a night.  Even more shocking, at least to me, is that four and a half hours of that is “live” meaning they are watching regular programing and hours of commercials.  But that isn’t the worst of it, also according to Neilson is the fact that those aged 50-64 watch over six hours per day while those over age 65 watch almost seven and a half (!!!) hours each day.

I get that when we aren’t feeling good in body or mind, it is sometimes nice to just kick back and watch television. Self-care and self-compassion is important. But now that I am feeling better it is good to remind myself that anything, including watching television, can become a habit.  Our bodies need movement and it is important that we not spend so much time sitting.  Plus, I hope I always remember that the quality of information I put in my mind (either from television, computers or reading) helps to frame my outlook on life. While we certainly can’t control everything that occurs in our lives, we can definitely decide how much and what to watch. The SMART approach is to always stay mindful and aware of our choices as much as possible.

(If you want to learn more about any of these shows or how to watch them, simply use google!)

Okay, your turn.  What are your favorite go-to television programs?  Do you only watch positive shows or do you have a guilty pleasure or two?  Please share any of your favorites or what you think of mine in the comments below.