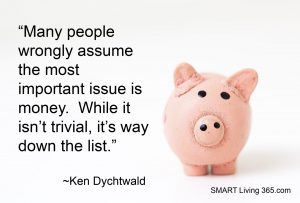 Unfortunately, the short answer to that question is, “Not always.” While I usually start out my posts a little more optimistically, this idea has me wondering.  Why?  Because as I mentioned a couple of weeks ago, I’ve been listening to a bunch of lectures by a man named  Ken Dychtwald.  Based on many of his insights, I can’t help but believe this topic deserves more thought and consideration than I’ve given it before.  After all, what is a long lifespan worth if it doesn’t include a long healthspan?  Do that many of us want to stay alive long after our health is unrecoverable or completely deteriorated? Not me. What about you?

I live in Southern California and a large portion of us are into staying healthy. Maybe it’s the warmer weather or more casual outdoor lifestyle. We tend to eat well, exercise more and take care of ourselves. I think that’s why I see men and women around me living well into their 60s, 70s, 80s and some even in their 90s, with vibrant and active lives.  But is that really typical of where most people are once they find themselves at those ages?  Is it delusional to think every one of us can escape a decline? I think plenty of evidence exists showing that when take the right actions—along with a positive attitude, close relationships, and conscious intent to stay active and healthy—we help to boost a longer healthspan.  Yet even though that is true, what about those who don’t follow the same program or are caught off guard unexpectedly?

It matters.  Something I found noteworthy in all of the lectures by Dychtwald was that most people approaching retirement age tend to focus on how much money they will need.  But it turns out that isn’t what’s most important to them once retired.  Instead, according to Dychtwald and all the research he has done in this regard, “Retirees say that staying healthy is the #1 key to a happy retirement.”  He also points out that the primary reason that many people retire before they thought they would is because they had no choice.  They either got sick, injured, or they needed to care for the health of a loved one. Any of those circumstances obviously drain financial resources no matter how much you save, and definitely affect the quality of one’s retirement.  So if money isn’t the most important element to plan for in retirement, that changes things.  And, that’s why Dychtwald believes that while we age “One of the smartest things a person can do for their financial wellbeing is to have more physical and emotional wellbeing.”

Also at issue, when we focus solely on lifespan many people tend to judge success by the number of years a person manages to stay alive. But should that be the goal? Something Dychtwald believes that we need to do is to work on creating better medical science and trained doctors with a focus on older adults and the quality of their experience.  As part of the problem he points out that in 2016 there were 226 medical schools in the U.S. and only 12 of them had departments of geriatrics.  Despite the obvious need, Dychtwald says this is, “…because geriatrics is not sexy or highly compensated.  The number of geriatricians in America, while there are 40,000 or so pediatricians…we only have about 5,000..”   That’s right.  Only 5,000 specialists are trained and experienced with the growing needs of aged adults.

Dychtwald also makes a great case for the need for better health science and research for seniors.  The major reason that lifespan increased so dramatically in the last century is because we eliminated most of the diseases and health concerns that took people out in early life.  Problems like infectious diseases, difficulties at childbirth, infections, even accidents have been radically reduced through the years. Yet, while most of us are living long past what our ancestors did, little is being done to eliminate the diseases and health conditions that mainly affect those over 50.

Dychtwald uses a particularly vivid example of this by mentioning the iron lung. Back when polio was rampant and deadly, the primary solution that many sought was to create more portable and “comfortable” iron lungs so anyone with the condition could stay alive.  It wasn’t until Jonas Salk insisted that we cure the disease, rather than merely treat it, that the cure was found.  Now, in the 21st Century there is a lot of focus on making cancer treatments less debilitating, but far less on eliminating the horrible disease altogether.  It’s the same with Alzheimer’s.  Instead of doing everything necessary to cure it, billons of dollars are being spent on how to manage it.  According to Dychtwald in 2016, “…for every dollar we spend on caregiving people with Alzheimer’s, we spend less than a half a penny on the science needed to beat the disease in the first place.”

Of course, of primary importance is the awareness that we must take more personal responsibility for our own health throughout our lifetimes—not just at the end of it.  There is overwhelming research that shows that remaining physically active, eating healthy foods, staying mentally agile and minimizing stress can dramatically influence our lifespan.  Practicing moderation with substances like sugar, fats and alcohol, and eliminating smoking are also wise.  Taking care of our teeth and regularly scheduling checkups and preventative medical tests also lead to better outcomes. Forming positive relationships and getting beneficial sleep is also beneficial.  While we may not be able to control every eventuality, we can influence our health in more ways than our parents ever thought possible.

I do believe that a lot of the anti-aging and pro-long-life publicity that we frequently read and hear about is exciting.  I just heard about a particular molecule has been discovered that when given to mice it allowed for significant rejuvenation of their muscle mass.  Who over 60 doesn’t enjoy reading that?  But let’s not get too carried away with the hype.  Even if the interventions eventually pay off, they will likely be only available to the super wealthy AND won’t come close to answering the “why” we want to live longer in the first place.

I also believe that sometimes it is easier not to think about this issue.  Like Scarlett O’Hara, it’s tempting to tell myself I’ll just think about it tomorrow.  As long as I feel okay today, why worry?  But isn’t it possible that is a big part of the problem in the first place?  Just imagining we’ll live forever without considering why, and how and all the details of it isn’t very realistic.   Vampires notwithstanding, Dychtwald tells of an ancient Greek fable that points out the challenge.

In ancient Greek times Eos, the Goddess of Dawn, fell in love with a mortal warrior named Tithonus.  Distraught over his mortality, Eos begged her father Zeus to grant her lover immortality.  “Are you certain that is what you want for him?” asked Zeus.  “Oh yes!” cried Eos enthusiastically.  It wasn’t until she left the grand chamber of Zeus that she realized that she hadn’t specifically asked for Tithonus to remain young and healthy.  And so it was with each passing year, Eos watched with sadness and even horror as her lover grew older and sicker.  His skin withered, his organs deteriorated and his brain grew feeble.  Ultimately, the once proud warrior was reduced to a collection of pained and broken bones—but still he continued to live forever.

When we are young most of us tend to take our health for granted.  Then once we hit middle age something may occur either with us or a loved one and we start recognizing that it is something to value and that needs our care.  What would happen if, from the time we were children, we were taught that our lifestyle choices had consequences?  What would be different if we were raised knowing that the food we eat, what we drink, the air we breathe, the hours we spend active (or inactive), the amount of time we slept at night, and the quality of our relationships, all impacted our health in the days to come?

And knowing it takes discipline and focus to impact our health in a positive way–is that something all of us really want to do? Maybe the trade-off for all that effort isn’t something some believe is worth the resolve.  Best to admit that up front rather than blame others like our parents for bad genes or the drug industry for not having the right medication to make it happen.  Again, if we want to live forever, why?  And what do we hope to be and experience with that extra longer life?

Trust me, I have no answers.  I just believe it is SMART to start asking these questions.   I confess that these topics didn’t interest me nearly as much as they do now as I approach age 65 in 2020.  Yes I want my healthspan to match my lifespan but I now realize that it asks more of me than just a roll of the dice.  Life is a participatory experience and the time to get involved is now.