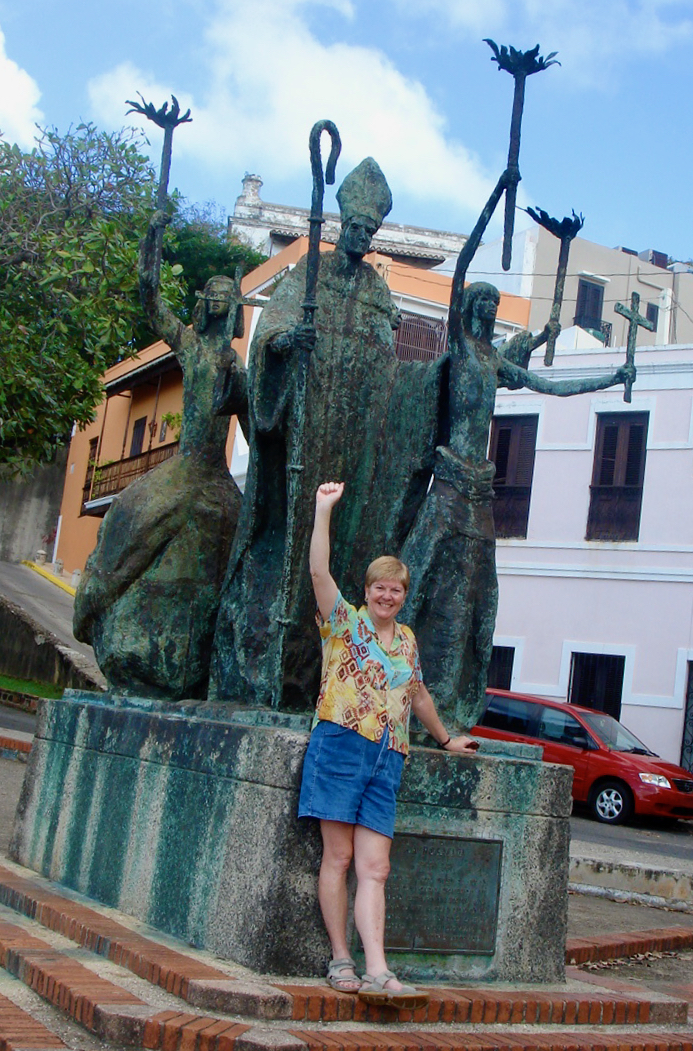 La Rogativa in San Juan Puerto Rico honoring the women who saved the town from invasion.

My father was a loving and kind man. He was also very opinionated, loud and overbearing when it came to talking about politics, religion or just about any subject he disagreed with. I can still picture my mom and my three sisters sitting silently at the dining table most nights as Dad pontificated on the topic du jour. Mom typically busied herself putting dinner on the table or quietly sat and self-medicated with a cocktail and a cigarette.  Occasionally, my older sister Ann attempted to jump into the fray but was instantly shut down.  Not only did she never get her point across, such attempts usually ended in tears. True to my nature, I seldom went toe-to-toe with Dad because I wanted us all to be happy. Most of all I wanted to be seen as the good girl, the good daughter.  Fast forward 60 years.

I don’t know where I have been living the last 60+ years but I don’t ever remember hearing the statement “Do no harm but take no shit.”  That was until I listened to an interview this week by author and Omega Institute Co-founder Elizabeth Lesser.  I read her first book years ago but it’s her current one that has my interest.  Titled, Cassandra Speaks—When Women Are the Storytellers the Human Story Changes.  Not only does Lesser explain the background behind the Cassandra myth, she also explains why it is time for women to change the story of how power is thought of in the world.  Because we all know (don’t we?) that whoever comes up with the story is in control of how it unfolds.

What is the Cassandra story?  In a nutshell it is similar to one that some of us have lived.  Cassandra was a beautiful young woman and highly desirable to both mortal men and gods.  The Greek God Apollo found her so captivating that he bestowed upon her the gift of prophecy so he could win her over and have his way with her.  However, when she still refused his sexual advances, he retaliated by cursing her.  What was her curse?  Even though she could foretell everything that would happen in life, with her family and her country—no one would believe her. Instead she was thought insane and pathetic.  In the end, she was brutally raped and murdered without ever having been believed.  While it thankfully isn’t usually that brutal, most women know the pain of what it feels like to not be heard.

Lesser thinks it is time to change the ending to that story.  From what I can tell, the message in the book and her current lectures and interviews is that it is time for women to change all of the cultural stories that put women in an inferior position of power.  Not only is that balance critical for women, it is also a benefit to men and a necessary step toward saving the planet itself. According to Lesser, it’s time to take the focus off of mankind and instead put it on humankind. Again, whoever controls the narrative of a story controls the outcome.

As Lesser points out repeatedly, the Cassandra story is just one where women are considered to be a gift to men and then somehow manage to screw things up.  Think of the Adam and Eve story. Even if you consider yourself an atheist, nonreligious or practice another religion, that mythology still dominates our culture.  The story is told that Eve came second and was given to Adam as a helpmate.  Everything was perfectly wonderful until she listened to the snake (consistently believed to be wisdom) and tasted the apple. In other words, as commonly told, the fall of the universe was a woman’s fault and women have been trying to make up for that mistake ever since the story was originally written by men.

So even if you went to a happy little Sunday school like I did, imagine what that does to the psyche of young girls.  Sure Jesus loves you and forgives you everything, but all human problems are your fault to begin with, so stop it!  Stop exploring your wisdom.  Stop your curiosity.  Be polite, do what you’re you’re told, and stop being so loud—that is if you want to be a good girl, loved and valued.  Oh, and have a few kids and take care of them while you’re at it.

Lesser does admit that things have changed, she has changed, but that we still have a long way to go.  Don’t believe me?  Just consider all of the women who have accused our current president of rape and sexual misconduct.  There are twenty-six in case you lost count.  And look what’s come out of that? Or consider Senator Kamala Harris, an amazingly accomplished woman and hopefully our next Vice President.  However, I had a woman on Facebook tell me Harris was nothing more than a black woman in a Trojan Horse.  How Cassandra-esque was that?   As long as women are put in their “place” and complimented more on their color of their skin, their beauty and child-bearing abilities and less on their brains actions and natural instincts, the prejudice continues.

At the core of the issue is the stories we tell about power and the differences between what we value.  We are all too familiar with the qualities we tend to admire in the male version of power—strength, control, dominance, and force.  We build statues, give medals and applaud those  that represent those ideals. Wars are fought to maintain them.  But what if we equally admired connection, communication, compassion, adaptability, nurturing and yes, love?  What if we built statutes that represented people—yes women—who demonstrated the power and value that women bring to the table?  If you can’t imagine and admire anyone who fits that description, then you are a victim to a culture where masculinity is dominate.  Even in the above photo (one of the few in the world where live women are portrayed) from San Juan where it was the women who literally saved the town from the British invasion, they still inserted a large man prominently in the statue.

So what about my story?  Long after I left my father’s house I stayed silent—at least for me. I met, fell in love with a man who was also very vocal and opinionated but fortunately as I grew so did he. Looking back, he was as much a victim of our male dominated culture as I was.  During the first years of our marriage I mostly let him talk and express his opinion while I hid behind cigarettes just like Mom.  But when I finally quit smoking 10+ years later, I warned him.  From that point forward I knew that once I no longer had something to placate me, I would have to start speaking up and out. And I did.  Fortunately for our relationship, Thom was (and has always been) my greatest cheerleader.

Still it’s been a long road and I am not nearly as far as I eventually hope to be.  Just this week a male friend challenged something I wrote on Facebook with both gaslighting and mansplaining.  It doesn’t really even matter what he said, but now that I have found my “voice,”  my first reaction was to be defensive and want to strike back and retaliate.  That’s when I remember the line, “Do no harm but take no shit.”  What that means to me is that even when people are doing things I disagree with or don’t like, I don’t have to react in a learned aggressive manner.  In other words, I want to be able to be clear and set boundaries without starting a fight.  As most women know instinctually, there are better ways to deal with disagreements or conflicts other than annihilating the opposition. Taking a more nonviolent approach to communication may be considered “soft,” but I believe our world needs it now more than ever.

So as I age I am learning how to hold the many paradoxes that exist in us all. How can I be kind without being a pushover?  What does it look like to be strong and vulnerable simultaneously?  How does strength with softness coexist?  How can I speak my truth without putting others down?  What does it take to be a nurturer and a provocateur at the same time?  Can I be authentic and true to myself without fear of other people’s judgements? Can I say no to other people when I really want to without fear of reprisal?  Is it possible to go against my cultural conditioning and be who I came here to be? So many questions—but  isn’t it time to start looking for answers? As the Black Lives Matter movement shows, it is impossible to change the story if you aren’t even willing to ask questions about its existence in the first place.

As a woman I long for love and connectivity but I no longer want to pay the price of silence or acquiescence in order to be accepted.  Thankfully I’m married to a man that is growing along-side me and one that accepts the paradoxes that I/we live with as we go through life.  Like Lesser, I agree that our world is struggling with challenges in the death throes of a dying culture.  So many things are changing and it is likely that the SMART course forward is changing the story of women and the awareness that it will take both men and women to save humankind.