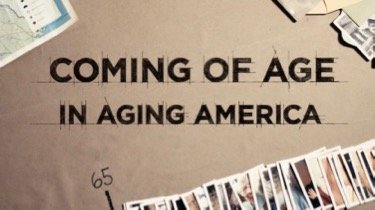 Recently I watched a new documentary entitled Coming Of Age In Aging America. I expected the focus of the film to be similar to much of the other information I read almost daily on the Internet.   Sure the movie covers a few of those common themes prevalent in the positive aging message. But more importantly, the major focus is a deep inquiry into the sustainability of how most of us view the overall life-progression or life-course of all Americans as we age.   What do they mean by that? And why do I believe it is important for all of us to begin to rethink the current model of aging and retirement that most of us unconsciously hold as sacred?

First, it’s important to define what they mean by “life course.” Most of us recognize we start life as babies, then children, then teenagers, then young adults, then adults, then middle age, and then old. The obvious problem with that particular “life course” is that the first 25 years of life is given all sorts of names and then after middle age, we become just “old” or senior. Instead, the movie breaks it down in a more equitable fashion. They suggest the current life course in most Western Countries is made up of three segments.

While that might simplify things and seem okay on the surface, the problem is that it no longer fits the 21st Century. Why? That model was essentially developed for the 1950’s view of longevity. Remember, never before in human history have people lived for so long. Studies suggest that if we live to be 65 years old these days, in all likelihood we will live until at least 85.   Combine that with the fact that birth rates are dropping at the same time, and the model is turning from a pyramid to a barrel. Also important 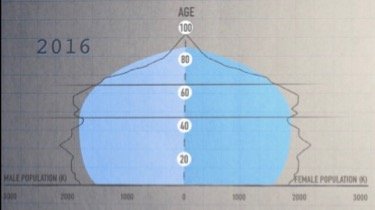 to realize, this isn’t just here in the United States.  Europe, Japan, and Asia are experiencing the same phenomenon.

As the movie points out, an aging society isn’t just about old people living longer.   And although most of us baby boomers tend to think big transitions like this are all about us as a generation, we are just the “introduction” to this permanent shift. Gen X and Millennials will also have longer lives indicating a permanent shift in the human life course as we know it.

Why does it matter? According to the sociologists that are studying this remarkable shift, this movement requires us all to start thinking about the aging process in dramatically different ways.   Changes about how and where we work, how and where we live, and how we organize our families, our healthcare, our economies and our political lives become relevant. In fact, this shift requires us to change how we think—and that’s a big deal.

The film offers the example of how life in the suburbs was promoted during the 1950’s to support growing families. Fuel was cheap, space was plentiful—who cared if you had to drive a long way to work?   But now, nearly half of our population still lives in what can be called the burbs. Fuel is expensive and space is becoming an expensive premium for many incomes. Even more problematic, 75% of older Americans still live in these more remote areas in big houses designed for growing families. Driving and accessibility are other issues. Instead of continuing to promote such communities, it is time to rethink future living arrangements that benefit both children and older and less mobile adults.   Considering the resources of our planet is equally important.

The film then tackles the concept of how retirement is currently viewed in our culture. Most people today claim it as a right that we all can expect when we get to a certain age. Yet, retirement at age 65 is actually a relatively new idea less than 100 years old. When Social Security was first enacted, the average life expectancy was only 62.  So, although longevity has increased dramatically as a society, our attachment to that age for retirement remains etched in stone.

As I mentioned before, according to the movie, the majority of us can now expect to live at least 15 years past the traditional retirement age. But what does that look like? And as psychologist Laura Carstensen says, “There isn’t anything in the psychology literature that suggests that it’s good for people to go on vacation for decades.” Ouch!

Perhaps more importantly, even if we wanted to spend the remaining years of our lives kicking back and doing nothing, how many of us can really do that? Studies show that many older Americans have little or no savings to carry them through an extended lifetime. And let’s not forget the possibility that millions of older adults may be unable to financially support themselves should Social Security and Medicare be eliminated.

The big point of the film is that we are clearly no longer the same people, or live in the same world, as those who existed in 1932 (when Social Security was first enacted) or in 1950 (when the suburbs were promoted) or even in 1970. Yet again, as the film says, “But our institutions, economies, policies, Social Security, Medicare, our communities, work, were all designed for who we were 50 years ago. They don’t work for us today.”

So is it all bad news?  Does the movie just suggest that we all forget about ever retiring? Not at all. What it does recommend is opening the conversation and increasing awareness about the issue—not only for older adults but for all generations as well. It’s one thing for a baby boomer and others to talk about the need to eliminate ageism in our society so we can experience greater opportunities. But in order for real change to happen, we need to get all generations talking and thinking about what it means to age well during our entire life course.

One key is to shore up Social Security and Medicare so that those institutions stay healthy for current and future generations. It isn’t a matter of just making sure it is there for seniors now of age—but also that it stays viable and strong for those who hope to also use it in the future—meaning Gen Xers and Millennials too. Suggestions are to slightly raise the retirement age—although that hinders low-income earners the most. The movie points out that raising Social Security rate limits for the wealthy would make the biggest difference, and have the most positive effect for the vast majority of us. But then we have to be willing to insist on that change.

Another of the film’s most interesting suggestions is really quite SMART. Instead of us all spending the mid-period of our lives working hard, raising families and paying bills, the movie suggests that we all begin to readjust our approach to working throughout our lives. After all, the biggest reason most people can’t wait to “retire” is that they have been drudging for years at jobs that they really don’t like. Many see retirement as the ultimate “vacation” they will finally get to experience after all that work and sacrifice. What if we change that? What if we start promoting “experiences” rather than things? What if people stopped going into debt—which forces them to take jobs they don’t like? What if we all started living within (below) our means? What if we encouraged people to take mid-life sabbaticals instead of waiting until after they “retire” to sit back and consider how they want the direction of their life to proceed?  What if learning and growing was a life-long event?  All these are great questions, which ultimately asks us to rightsize our lives during the entire span of our lives—not just at the end.

Baby boomers are changing the look of aging in our country—no doubt about it. But what if Baby Boomers decided to make it our legacy to reinvent how we experienced life overall—not just at the end? The movie offers some exciting examples of how workplaces and companies can become more people friendly for all ages—and how those change influence satisfaction for all workers. It explains how flexibility, part-time work, and adjustments to less physical requirements being promoted by some employers are keeping people happily involved in work rather than doing everything they can to escape.

In addition, the movie explores housing alternatives in contrast to the old model of the suburbs. By embracing models of communities that are walkable, age accessible, work accessible, financially accessible and connected, it helps all ages, not just older adults. By putting our focus on the quality of life rather than just the quantity, we can begin building a life course that benefits us all. As the movie says, “The best antidote to death is life.”  That means a good life overall.

Longevity changes everything when you think about it. This permanent shift means we can no longer just expect a short and sweet life. Many of us are accustomed to living as though life is short—but fortunately for many of us, it really isn’t anymore. And the things we do now regarding our health, our happiness, our time, our finances, and our relationships could very well come back to haunt us in the years to come. Wouldn’t it be better to acknowledge our extended lives with an awareness of how we want to live and experience life in the years to come?

I confess that I haven’t previously considered how positive aging is an awareness that encompasses all generations that follow mine—but I’m now convinced that is what is really needed.  The SMART approach is to realize we are living in a time of change on many levels and like so many things, we either live it by default, or we live by design. The choice is ours.