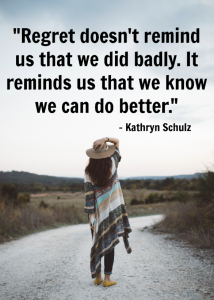 How I spend my time continues to be on my mind since writing the last blog post.  So, my attention was triggered when I started listening to author Daniel Pink discuss his new book about regrets during a podcast.  Is it possible that acknowledging regrets can help us spend our time in a more meaningful way—rather than events we try to avoid (or forget) as much as possible?  That is part of the basis for Pink’s new book where he explains how and why our regrets can point us in the direction of what matters most to us.  Not only can we use our regrets to create a better life, they can also teach us more about ourselves and help us make changes and choices that will lead to a more fulfilling future.  And most important, how giving voice to our regrets can often help motivate us to take steps and absolve them for once and all.

Daniel Pink is an author who frequently writes about what motivates people to do what they do, so he has been on my radar for years.  His current book, The Power Of Regret—How Looking Backward Moves Us Forward   explains how regret is often the most misunderstood of all negative emotions.  Why?  He believes it is because of our national obsession with positivity. I get that.  If we are always focused on the positive and completely ignore the negative, we miss the benefits that both perspectives offer.  Of course, he is very clear that too much regret—rumination, whining and complaining—is not the answer.  In his view, regret is the ability to look at things in our past, recognize that things might change, and then imagine a better outcome.

Of course, Pink makes an important distinction with how agency impacts regrets. That agency, or ability to choose, marks the difference between regret and simple disappointment.  In other words, sometimes we can control what is happening and other times circumstances beyond our control take over.  That’s why Pink asks, “Are you the actor or the author of your life?”  Is it possible that we are both? To explain this apparent paradox, part of his extensive research into regret asked two questions:  Do you believe that you are in control of your life?  And second:  Do you believe that things happen for a purpose? The majority of those interviewed believed it was both, which led Pink to conclude that life is a mix of fate and circumstance. Do you agree?  From my perspective, it confirms the idea that we can’t always control everything that happens in our lives, but we do have the ability to determine how we will respond—and where we go next.

Other interesting points that Pink makes is to group regrets into four areas.  He asserts that while there appears to be dozens of categories, his research led to the four core needs. They are:

A key to Pink’s approach is to recognize that by remembering our regrets from the past we can learn what we value most and identify what we can change for the future.  He freely admits that when he was younger the need to rectify his regrets didn’t exist.  But now in his 50s he has the “mileage” to look back on his life.  He also acknowledges that he still has time to make course-corrections and hopefully create a better life from here on out.

And those course-corrections are why he is so “positive” about regrets.  (My adjective, not his!)  Behind each of the four is the primary life value that can be gleaned once the regret is acknowledged. Once we recognize the regret, we can start redirecting ourselves more carefully in our future and avoid repeating any mistake we made that caused the regret to begin with.  They are:

Out of his research Daniel Pink also discovered something he didn’t expect.  And that was the value behind revealing regrets.  Before writing his book, Pink established the World Regret Survey and ended up with over 16,000 different responses from over 105 countries. Repeatedly he heard from people who thanked him for the opportunity to share their regrets.  Pink also believes that we don’t have to verbally confess to another.  Just the act of writing down our confession and putting it into words (and a story version) helps in more ways than we know.

With such a focus, I’ve been asking myself what it is that I regret.  In some ways it is easier to think about regrets as mistakes I feel I’ve made—although those two are closely relatedly.  And in terms of mistakes, both Thom and I feel that the only “true mistake” is the one you don’t learn from.  Thankfully, as a life-long student of a good life, I’ve had a LOT of lessons.  However, one thing that did come up for me was the regret that I didn’t ask my mother more about her life and her family.  Now that she is gone there is no one left who can fill in those holes.  My lesson?  Don’t wait.  Talk to those we care about and ask them to tell us their life story and what is/was important to them.

I recognize that I have had a very fortunate life with a great deal of agency that is not always available to others.  But even then, holding the belief that we can all do a bit better with our lives in terms of our choices, our foundation, our values, and our connections, I believe it is SMART to use everything we can (regrets included) to create a good future for ourselves and each other.