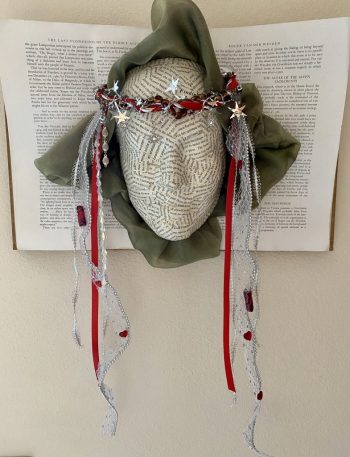 The crone crown I made at the recent croning ceremony.

Last weekend I drove to a small town about 50 miles from where I live to be a part of a Croning Ceremony. There, along with 28 other women, I officially became a crone.  Why? As a woman who is about to turn 65 in a few months, I thought it was time for me to embrace and celebrate the woman I am, rather than the woman I used to be.  Not only was the gathering of women and the ceremony itself heartfelt, uplifting and inspiring, the experience helped me to get in touch with an inner archetype that most women (and some special men) hold inside. Could it be possible that that energy is exactly what the world needs most right now?

If you are anything like me, chances are you’ve heard the label of crone before and thought of it as the last thing you’d ever strive to be.  It’s true that most modern dictionaries define the word as an “ugly, withered old woman.”  But quite the contrary, the word actually originates from the word “crown” and signifies a distinction placed on a woman once she achieves a certain age, wisdom and status within the community. That sounds better doesn’t it?

By the same token the word “hag,” which is often thought of in combination with the crone, actually evolved from a description of a woman considered holy, divine and powerfully supernatural. Yet, by denigrating those words, I can see why our culture and many men feel far more comfortable when confronted with the power of a woman. Unfortunately, many women today believe those lies as well.

However, with women living longer and becoming more and more conscious of their own strength, the word crone is growing in popularity and hopefully, acceptance.  Plus, as many of us experience the power of such a ceremony, the more likely the value and benefits will be talked about, written about and shared with others.

One such woman is Jean Shinoda Bolen author of numerous books including Goddesses in Every Woman and Crones Don’t Whine—Concentrated Wisdom for Juicy Women. Using her writing and her age, Bolen clarifies what it means to be a crone and offers a wonderful introduction to the power that women hold in the third part of their lives. It was from her that I learned that most women (and some men) carry that particular archetype within them. Remember, an archetype is an energy “pattern” or blueprint that helps to define our personalities and actions. When we recognize that blueprint, and bring it forth, it enhances our lives and the lives of those around us.  According to Bolen, there are 13 identifiable characteristics of a crone.  Five that I found most compelling are:

Another woman who introduces us to the power of older women is Dr. Clarissa Pinkola Estes who wrote The Power of the Crone: Myths and Stories of The Dangerous Old Woman and Her Special Wisdom.   She writes, ‘Who is the crone? She is the most dangerous, the most radical, the most revolutionary woman in existence. Whether in fairy tales or in consensual reality, the old one goes where she wants to and she acts as she wishes; she lives as she chooses. And this is all as it should be. And no one can stop her. Nor ought they try.”

Or what about the author of Eat Pray Love, Elizabeth Gilbert?  Gilbert points out that most of us are more familiar with our inner child or even our inner goddess.  Yet, she recommends we take the time to get to know and become that wise old woman who lives inside us.  Why?  As Gilbert says, “The really old ladies are always bad-asses. I’m talking about the real survivors. The women who have been through everything already, so nothing scares them anymore. The ones who have already watched the world fight itself nearly to death a dozen times over. The ones who have buried their dreams and their loved ones and lived through it. The ones who have suffered pain and lived through it, and who have had their innocence challenged by ten thousand appalling assaults…and who lived through all of it.  The world is a frightening place. But you simply cannot frighten The True Crone.”

Gilbert suggests that we all start recognizing and celebrating those crones who inspire us.  She mentions the women who have returned to live at Chernobyl in spite of the dangers.  Their home, their community and their freedom mean more to them than fear of death.  Apparently they believe that after all they have been through, living and growing things back on that radioactive land they call home with friends is far superior than living in bleak, tenement housing in a city with strangers. What do they have to lose? That’s badass.

Or what about Ruth Bader Ginsburg?  How many times has she fiercely faced down discrimination and adversity (not to mention several bouts of cancer)—that’s badass!  What about Nancy Pelosi?  Even if you don’t like her politics, she is seriously spicy and badass!  Or what about Maxine Waters, the first woman and African American to lead the U.S. House Financial Services Committee at age of 80 and serve a total of 15 terms.  Wow!  Just contemplating all that she has faced—again and again—serious bad ass!  How about Jane Goodall who has spent her entire life fighting for animal awareness issues and the environment?  Or what about Gloria Steinem?  That woman is the definition of bad-ass and all women owe her an amazing amount of gratitude for where we are today.

Still, if you google “older woman making a difference in the world” what usually pops up are photos of beautiful older women (mainly celebrities) who still “look” young and good. I’m fairly convinced that a true and powerful Crone doesn’t give a damn about whether her primary attributes are “looking good or young.”

So what is my biggest takeaway now that I’ve been croned? Perhaps it is the awareness that it is time for me (and all of us of a certain age) to accept our inner crone and start acting fearless. You know what I mean? Remember, it wasn’t that long ago that few of us lived past age 50 (the official age of a crone).  Nowadays we have a good 30 to 40 years after that time to live out the remainder of our lives. What are we doing with all that extra time?

Like most of you I definitely appreciate (and hope to not lose) the benefits, the freedom and the better health that those additional years offer me.  But isn’t it likely that there is also an obligation for those benefits?  An obligation to our children and future generations?  An obligation to Mother Earth, the animals who share our world, the air we breathe, the food and water we ingest?  Life Itself?  I think a crone takes that all into account and fiercely shows up and gives what she feels called to give. We are not walking in this world alone.

I’m not sure what the future holds for me or anyone else. As usual, the SMART approach is for each of us to find it for ourselves. But I think like Bolen says, “I believe that the thought that women together can change the world is emerging into the minds and hearts of many of us, and that the vessel for personal and planetary evolution is the circle with a spiritual center.”  Perhaps in the end, we crones are the ones we have been waiting for.