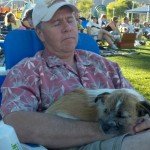 It’s summertime here in the Coachella Valley where I live, and because it is the desert southwest, it is expectedly hot outside.  While we locals have certain tricks and techniques to stay cool, most of the time the heat of the season makes me lethargic and under-motivated.  While none of us like to think of ourselves as lazy, me included, maybe the season is both an invitation and permission to slow down, relax and enjoy life.  After all, pushing yourself when it’s extremely warm (or cold) outside isn’t SMART no matter how you look at it. END_OF_DOCUMENT_TOKEN_TO_BE_REPLACED 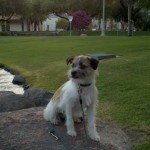 Our “lesson” in this regard came this past Monday evening.  There was nothing special about the day—nothing bad, but nothing amazingly wonderful either.   We’d finished dinner and Thom was in the kitchen doing dishes.  I could see that the sun had finally set so I knew it would be getting cooler outside.  Our small mixed-terrier dog Kloe was watching me closely to see if it was time to go to the dog park before dark.  But right before we did, Thom decided to take the garbage out to the trash bins with Kloe trailing behind. END_OF_DOCUMENT_TOKEN_TO_BE_REPLACED

Gutman said he got his start from a study done at Berkley that tracked graduates over a 30-year period.  What they did is first examine and then measure the smiles from students found in their graduation yearbook.  From the smiles they measured they were able to predict how fulfilling and long-lasting the individuals married relationships would be, how well they would score on a standardized test for well-being, and finally how inspiring they would be to others.  Wow—makes you wish you could go back and take that photo again right? END_OF_DOCUMENT_TOKEN_TO_BE_REPLACED