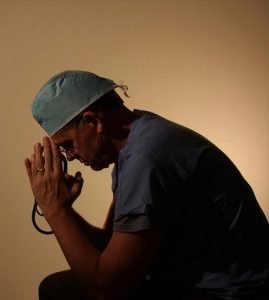 A couple of months ago I scheduled a routine medical checkup with my primary physician. While never a chatty or warm-hearted person, this time my doctor of nearly fifteen years barely looked at me as she sat typing and staring at the computer screen near the windowless wall of the room.   After a scant ten minutes of questions and answers, she glanced up, sort of nodded in my direction, and left the room. I doubt I need to tell anyone that this happens daily in doctor’s offices all over our country. Fortunately, my routine visit presented no life-threatening issues. But what if it had? Is it possible that something like mindfulness could benefit both those of us who visit doctors and the doctors themselves? Research now says yes.

It makes sense to me that the practice of mindfulness can benefit just about everyone. But until I was offered a book to

review by Dr. Ronald Epstein titled, Attending—Medicine, Mindfulness and Humanity the connection never crossed my mind. And let me assure you, I seldom read, let alone review, books that sound like they are geared toward doctors or western medicine. But something about the title and the blurb that accompanied the request made it sound provocative. And even when not facing an impending health issue, who among us isn’t at least vaguely concerned about the health care system in general?   Not only did this book offer a friendly and thought-provoking look into the mind and responsibility of many doctors, it heightens the growing evidence of why mindfulness, in general, can benefit all individuals.

The State Of Doctors Today

I doubt there is a person alive who hopes that any doctor they see isn’t both extremely competent as well as deeply compassionate. Yet how often is that the case? Even when the doctor is a kind and caring person, the system itself appears to train away the personal connection in the name of efficiency and economics. We feel it acutely as patients but according to Dr. Epstein, so do doctors. As Epstein says, even the most compassionate doctors are being pressured to see more patients, do more paperwork, and juggle more responsibilities every single day. Not only are those requirements exhausting, but they are also socially isolating.

Where does all that exhaustion and isolation, not to mention the lack of control they feel in the “bloodless language of healthy economists,” lead?   According to Dr. Epstein, in 2014 physicians reporting burnout rose to 54%.   And why is that such a big problem? Epstein says, “Burned-out physicians are more likely to take shortcuts, make diagnostic errors, and prescribe recklessly. They order too many tests and refer more, just because it takes too much effort to think through problems themselves.” Just like anyone in the general population suffering from burnout, doctors who suffer burnout stop communicating well, are more likely to abuse drugs and alcohol, and often slip into less ethical behaviors like shady business practices or violating confidentiality. Even worse, a study in 1996 reported that doctors are more likely to commit suicide than the general population and among other academic occupational groups.  And remember, this is over 50% of the doctors practicing today. (1)

And like anyone suffering from the distress of burnout, physicians often want out. Many of them retire early or stop practicing altogether. With fewer and fewer students entering the medicine field as it is, it is easy to see that we will soon be facing a physician shortage in the years to come.

Epstein refers to a psychologist named Dr. Christina Maslach who describes physician burnout as “an erosion of the soul.” Epstein explains that the problem isn’t only overwork, he believes “it’s a crisis of meaning, resiliency, and community. The toxic combination of high responsibility, low sense of control, and isolation sets the stage for a sense of exhaustion, powerlessness, and helplessness.” That is not good for anyone, let alone those we hope will help us heal.

Making matters worse, the expectation we all carry with us when we visit the doctor often adds to the problem. We want them to be knowledgeable, have excellent skills, be empathetic and caring, and never error. Yet that thinking alone is a near impossibility when realizing that we are asking our doctors to be omniscient, omnipotent and never make a mistake.   After all, health and healing are less straightforward than fixing a computer or a car. As Epstein says, “A patient’s outcome is not only completely attributable to a doctor’s skill; so much depends on the particulars of each patient that are out of a physician’s control.”   We may want our doctor to be perfect, but we must remember they are human too.

Is Mindfulness Training The Solution?

As a young doctor, Epstein experienced a dramatic surgical lesson that showed him that even with his superior education, “competence is fragile and takes mindful vigilance to maintain.”   With a goal to “capture the habits of master clinicians,” Epstein set out to study those who were able to maintain awareness, attention, and professionalism—no matter what they faced.   He also felt drawn to what is called a “biopsychosocial” approach to care, which includes “how patient’s psychological makeup and social relationships were as important to illness and health as the biological, genetic, and molecular aspects of disease.”   That study also recognized that doctors are people too, and that “their emotional responses to uncertainty, tragedy, grief and loss would affect the care they provided.”

Up until reading this book I had never considered how my doctor thought about her work or me. Now I am completely convinced that a doctor who practices mindfulness is nearly as important as the grades she received in school or her experience.   But just what are the benefits of mindfulness that help a doctor to achieve balance, self-awareness, resilience, and quality care for those they serve?   Here are the four elements Epstein believes are necessary for a mindful doctor:

Obviously, there are many more gems in this book that I don’t have time to cover. Fortunately, more and more medical school and hospitals are recognizing the value of attention training, mindfulness, and heartfelt communication. Surely this training will ensure better outcomes for patients and the doctors who serve them in the years to come.

It has been some time since I’ve read a book that captivated me as much as this one did. Of course, I’ve written about mindfulness before so that obviously helped to hold my interest. But as I mentioned in the beginning, who among us hasn’t visited a doctor, either as a patient or as a companion, and wondered about the quality of the care?   Now I have a renewed understanding of how the doctor might be viewing me as a patient and a better understanding of what might lie behind their eyes if they look me in the eye. And because a big part of SMART Living is becoming more aware of what is going on inside our own minds, the practice of mindfulness is something that benefits us all regardless of our health.