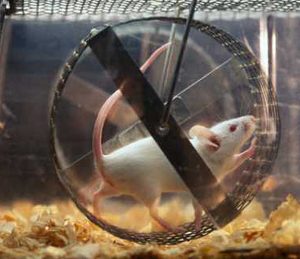 A mind stuck on rumination.

Yesterday it occurred to me that people are generally of two types—anticipators or ruminators. Sure most of the attention goes to whether or not people are positive or negative. But I’ve witnessed some people who claim to be optimists, and yet they overthink and obsess over their past, their worries, or their claims of injustice nearly every day. Perhaps it is SMART to consider other possible directions of our focus and explore ways to calibrate our attention in a more helpful way.

First, let me define the differences by way of an example. My husband Thom and I are fortunate to work with a married couple in their nineties. And when I say work, I do mean work. Larry first contracted with Thom over 25 years ago when Larry was just an alert youngster of 68. From the beginning, Thom admitted that Larry was exceptionally forward thinking. Later we met his wife Joanne and realized they both possess the ability to leave behind and let go of details from the past. At the same time, they almost immediately shift their attention to what is on the horizon.

During the last 25 years, with Thom’s help, Larry and Joanne have successfully bought, owned and sold dozens of commercial properties. Most of the time, they make money, but not always. It doesn’t seem to affect them much either way. If it works out well—they are glad for a minute. If it crumbles and falls—they are grumpy for a minute. Either way, their conversation quickly shifts to the next deal, the next event, the next happening. Sure, at their age they’ve had some health challenges, but you’ll never hear them complain or ramble about specifics. I consider them “poster children” for positive anticipation. It’s certainly no wonder that at 93 and 92 respectively, every conversation they have is a focus on all the positive things that are happening now and in the future.

At the same time, I know another couple named Bill and Carol. Both Bill and Carol are 30 years younger than Larry and Joanne. They work hard and have risen to some degree of success in their lives. But if you sit and talk with them for any length of time the conversation always drifts to things that happened that keep them from enjoying life today. Their focus seems to obsess over what has gone wrong, what should be different, and things that can never be figured out. And like the Bruce Springsteen song “Glory Days,” they regularly talk about the good old days when they were young, carefree, and their future looked bright. I consider them stuck in rumination.

Of course, if you study the psychological aspects of rumination you’ll find that it is much more involved than living in the past. In many cases, it is a sign of deep depression and constantly obsessing or overthinking about things that simply cannot be changed or understood. Women tend to ruminate more than men, perhaps because we make relationships a priority and those are often fraught with uncertainty. Unfortunately, rumination is usually a vicious cycle that gets worse if not kept in check.

The Negative Consequences of Rumination

According to researchers, the habitual cycle of rumination often leads to:

Is Rumination Just Another Name For Worry?

According to a study done by Susan Nolen-Hoeksema, Blair Wisco, and Sonja Lyubomirsky, the primary reason people worry or ruminate is to control or deal with uncertainty. However, those researchers believe that there is a significant difference between the two strategies.   Here is clarification.

On the other hand, rumination is usually:

The differences are further explained by Nolen-Hoeksema, et al., who said, “…when people are worrying, they are uncertain about their ability to control important outcomes, but they have some belief that they could control those outcomes if they just try (or worry) hard enough. In contrast, when people are ruminating, they are more certain that important outcomes are definitely uncontrollable.”

Of course, an individual who is worrying or ruminating can shift back and forth between the two states depending upon the circumstances. But usually, when a person sees the situation as hopelessness and beyond their ability to control, they are ruminating. And as stated above, the negative consequences of rumination can then grow until the ruminator feels completely devastated and can do nothing positive to get off of the hamster wheel they have built for themselves.

How To Let Go of Thoughts That Bind You

The good news is that unless a person’s rumination has escalated into severe depression, there are things they can do to make the situation better. One of the easiest ways to stop ruminating is to distract yourself when you find yourself obsessing or overthinking any problem, situation or relationship. In other words, let go of the idea that you can ever figure it out or get to the hidden meaning.

According to the study done by Susan Nolen-Hoeksema and others, diverting our attention to something that is “absorbing, engaging and capable of providing positive reinforcement,” can lift our mood and relieve our depressive symptoms.” That distraction can be as simple as, “going for a run or a bike ride, seeing a movie with friends, or concentrating on a project at work.”

Of course, those who routinely ruminate often find it easier to use negative distractors (like imagining something disastrous for example) instead of looking for thoughts that are more positive. Like any habit, if the mind is conditioned to look for the negative, it is much harder to see anything BUT the negative. And because that negative bias exists within them, they more easily are lead to destructive behaviors ( like addictions) to reduce the pain.

It’s easy just to tell someone to “think positive thoughts.” But what this information about rumination tells me is that if you are a ruminator at heart, it’s a lot harder to distract yourself in a positive way. So, what’s a person to do?   As the researchers quoted in the post say, we must find something that engages us personally.

Also beneficial is looking honestly at our high expectations for ourselves, others, and even the events we judge. Much of what causes an escalation of rumination is seeking unattainable goals, perfectionism, or tying up our self-esteem in one area of our life. Instead, learning to take small steps towards goals that give us a sense of having control (however small), can lead to improvement.

Positive self-reflection is also helpful. But again, if a person is prone to rumination they might just reflect repeatedly on beating themselves up and feeling hopeless. The key to making it positive is asking, “Do I call my self-reflection ‘brooding’ or do I call it ‘pondering’?” If we can make that distinction, we may discover the more helpful aspects of the experience.

It’s also important to note that a key to moving beyond rumination is learning to problem-solve and reflect in a positive way. Remember, rumination is often about avoiding actions we don’t want to take, and what that change might mean in our lives. That’s why another valuable strategy is to practice mindfulness or meditation. Again, this is not to let the mind spin out of control in negativity, but instead to learn to train the mind in a more beneficial direction.  Or like Nolen-Hoeksema and others say, “the key to therapy is for people to stop automatically accepting the true value of their negative thoughts and to choose to substitute these thoughts with more rational or adaptive ones.” They also remind us that we always have the ability to change things—even if it is just changing our minds about what’s happening.

Naturally, this article cannot explore all of the subtleties of rumination but what it looks like and how it feels is something I think many of us can relate to even if only occasionally. Do we spend our time anticipating positive things for the future, or ruminate and brood over things we can’t change or even know for certain?  As always the SMART approach is to do our best to stay as awake, aware and mindful in the moment as much as possible—and then decide.  So, which are you?

For the full paper go to:  Rumination