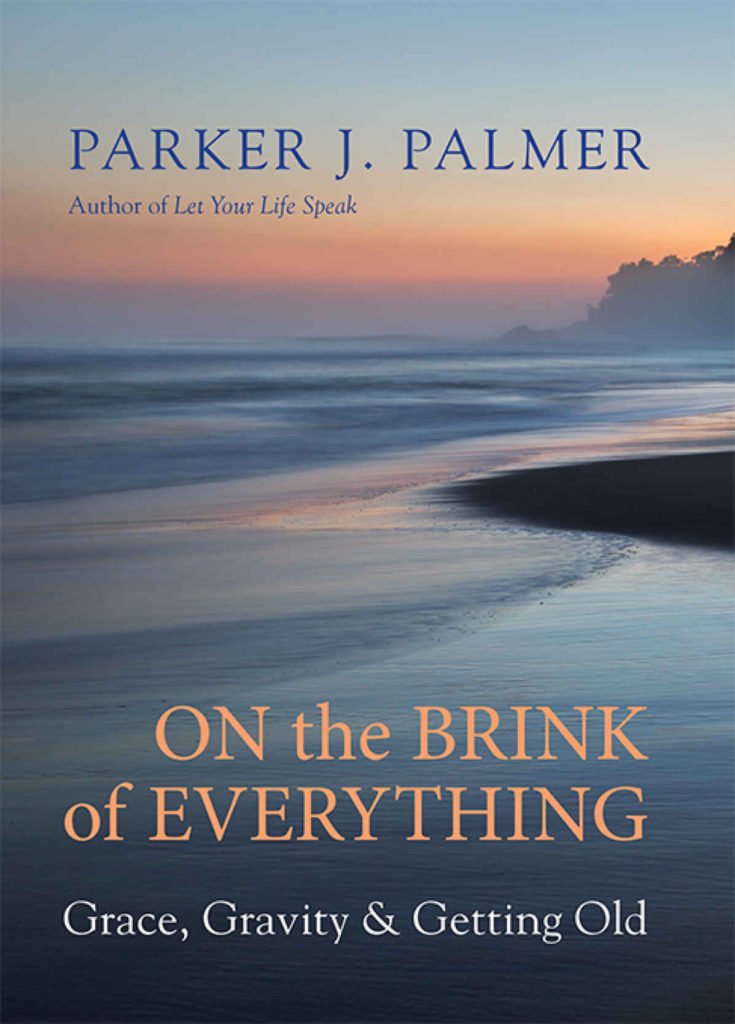 Every now and then, if we are lucky, we find an author whose words seem to speak directly to us in ways we wish we had said ourselves. That’s how I felt when I first found a book written by Palmer Parker over two decades ago.  So, when I learned that his latest book touched on aging, I didn’t hesitate to send him a Facebook private message asking if he provided review copies. Not only did he respond personally by email (because that’s the kind of man he is), he sent me an autographed copy hot off the press.  His new book, On The Brink of Everything—Grace, Gravity & Getting Old is a collection of essays that covers aging well along with other topics facing the world today.  For all of us who appreciate a wise, authentic and often transcendent voice about issues that matter, it is my deep pleasure to introduce you to Parker Palmer.

My first exposure to Palmer came from an attraction I had for creating community.  Back in the mid 90’s Thom and I co-created a spiritual organization we named Palm Springs Center Of Positive Living.  We birthed the group out of a deep desire to be a part of something that explored universal spiritual understanding and awareness as an alternative to traditional religion.  However, after nine years, the challenge of keeping a group of free-thinking, nonconformists together proved challenging and exhausting.  By the time I found Palmer’s work and his focus on community, ours had dissolved.  But something between the pages of his book and his voice in my head helped me understand and appreciate how some organizations and groups of people can thrive and come together when certain practices are embraced.

Paradox As A Practice

All these years later, I am still fascinated by how people come together in community—or not.  What is it that draws us together or repels us from one another?  According to what Palmer shares, it is usually our ability to embrace paradox—seeing beyond the logic of either/or thinking, to the paradox of both/and.   As Palmer says, “Living paradoxically is key to personal wholeness, which depends on the ability to embrace one’s self-contradictions.”  Perhaps it is that paradox of wanting to be part of a community while simultaneously craving solitude, that drew me to Palmer’s work in the first place.  At any rate, his ongoing prophetic and poetic exploration of discovering the hidden wholeness within our true self, each other, and the world is an awareness I seek on a daily basis.

A Different View Of Aging

So, what does Palmer have to say about aging that is different from what others are sharing in these times?  As he nears 80, Palmer admits “…I like being old because the view from the brink is striking, a full panorama of my life—and a bracing breeze awakens me to new ways of understanding my past, present, and future.”  With such insight, he says, “We have no choice about death.  But we do have choices to make about how we hold the inevitable—choices made difficult by a culture that celebrates youth, disparages old age, and discourages us from facing into our mortality.  The laws of nature that dictate the sunset dictate our demise.  But how we travel the arc between our own sunrise and sundown is ours to choose:  Will it be denial, defiance, or collaboration?”  Collaboration?  There’s that idea of community again.

Acknowledging that none of us knows for sure what happens when we die, Palmer concedes that we come from mystery, and we will return to mystery.  Meanwhile, he says, “I’ve long thought of old age as a time when all that’s left is to tell the truth—trying to remember to tell it in love.”  He adds, “It’s liberating to be at a point where I no longer feel a need to prove anything to anyone.”

Even so, Palmer’s past is filled with active engagement in community, spirituality, social work and even politics—with no plans to give it up at any age.  He says, “For people like me, the notion that old age is a time to dial it down and play it safe is a cop-out.  Those of us who are able should be raising hell on behalf of whatever we care about:  freedom’s just another word for no need to count the cost.”  With a strong conviction that our current democracy is under fire, Palmer authored Healing The Heart of Democracy: The Courage To Create A Politics Worthy of The Human Spirit (which I wrote a post about back in 2012).  His ongoing focus is on arriving at a “spiritual alchemy that all of us can practice.  It transforms the dross of political evil into the gold of political activism, revitalizing us to be the engaged citizens we should have been all along.”

While I typically avoid politics when writing here on SMART Living 365, I continue to feel a deep resonance with the approach of Parker Palmer.  He does not shy away from claiming that we live in perilous political times.  However, he is clear that we “must engage in civil discourse across political divides, without compromising our convictions.”  And regardless of how difficult that is, we must stay awake “and help midwife the rebirth of America, hoping that our national nausea in this moment is just another symptom that our country is pregnant with change.”  It is exactly that subtle sense of humor along with deep truth that highlights why I find Palmer’s insights so engaging.

When it comes to writing, Palmer calls himself an “Accidental Author.”  His own story mirrors my own in the fact that his first book, at age 40, happened serendipitously when he wasn’t even looking for it. He acknowledges that writing has always been a kind of “public therapy for me,” which I know quite a few other writers, like me, will cop to as well.   Palmer believes that in the beginning, it is critical for us each to figure out “whether your chief aim is to write or to publish.”  Plus, rather than explore topics we think we know a lot about or come from a place of being an authority, he instead suggests that we approach writing with a beginner’s mind.  He recommends, “Write about what you want to know because it intrigues and puzzles you.”  Palmer believes that his best writing flows from his gift of “bafflement” and acknowledges that, “When I am able to do that honestly, and well, it helps the reader see me not as an expert but as who I am: a fellow traveler, a companion on the life journey.”

That is exactly how I see Parker Palmer and have written about him before.  A real person with light and shadow.  Palmer is honest enough in his writing to make it obvious that we don’t see eye-to-eye on everything  (he’s a pessimistic optimist and I think you all know that I am a sometimes-delusional optimist!)  But even in areas where I don’t think we agree, I have no issue with his understandings because he NEVER comes across as a know-it-all expert who thinks he has the answer. Deep inquiry is his touchstone and he urges, “In both writing and in faith, we need to commit conceptual suicide again and again—if we are serious about the vastness of treasure and the inadequacy of our frail, finite and flawed words.”

Palmer ends this book, like all his work, with optimism.  He encourages us to stretch our hearts open and take everything in.  He says, “I know there are no shortcuts to wholeness. The only way to become whole is to put our arms lovingly around everything we know ourselves to be: self-serving and generous, spiteful and compassionate, cowardly and courageous, treacherous and trustworthy.  We must be able to say to ourselves and the world at large ‘I am all of the above’.”

Parker Palmer does not suggest that we “grow old gracefully.”  Instead, he urges us to accept grace when it’s given and be grateful for the life we have experienced—all the while doing what inwardly we are called to do.  He also awakened a new idea within me that opposes the lines of the poet Dylan Thomas who said, “Do not go gentle into that good night. Old age should burn and rage at close of day.”   Like Palmer says, as the years add up in me, I find myself far less interested in fighting the inevitableness of age.  Instead, like Palmer, I want to embrace the gift of a long life as it makes its way toward evening and then night like a beautiful sunset, or autumn gently giving into winter.  As the other saying goes, “Pain is inevitable—but suffering is optional.”  Maybe it’s time to recognize that “Death is inevitable—but suffering in its face, is optional.”

Every time I read the words of Parker Palmer I am inspired to be a better writer and more importantly a better me.  His words guide and enthuse me without claiming to have the answers.  So much of the philosophy behind SMART Living 365 exists in the words I read in every one of his books. And while I often feel I fall short of that intention, as long as people like Parker exist to point the way,  I celebrate the opportunity to keep doing what I can, where I am, with the choices before me.

Okay, your turn.  Are you familiar with the work of Palmer Parker or read any of his books?  If yes, what is your favorite book and why?  If not, do any of the ideas in this post resonate with you?  Please share your thoughts in the comments below.