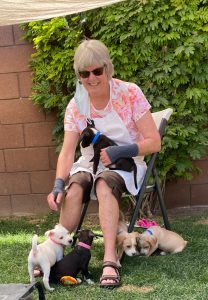 What if I told you there was one simple step you could take that would very likely improve your life when you get older?  Would you take it?  I’m guessing most of us say we would, but evidence is to the contrary. That simple step is getting your hearing tested and if the test proves you have a hearing loss, you get and wear hearing aids.  See I told you it was simple.  But statistics show that even if you need them, you won’t wear them.  That’s unfortunate for many reasons because I am here to tell you that after wearing hearing aids for six years now, I am a huge fan.  It’s not just because I can hear as good (or better now!) than most.  Instead it is because of all the proven health benefits that come from wearing aids that correct my hearing loss.

Six years ago, almost to the day, I finally took the step to get my hearing tested.  Like most people with some hearing loss, I knew that my hearing wasn’t what it used to be.  Thanks to my writing of this blog, I started researching the why and how before I even got tested and what I learned shocked me.  The biggest reason we need to wear them if we need them is because of all the overlooked health benefits that are diminished when we do.

What are some of consequences from not hearing well and refusing to wear aids? A study done in 2019 by the Journal of the American Geriatrics Society showed increases in three main areas by those not wearing hearing aids when needed.  They are:

While the study did not prove that wearing hearing aids could solve the underlying problems associated with hearing loss, they did appear to show a strong delay in any potential conditions.

Although an increased risk of dementia, fall-related injury and depression are bad enough, the list doesn’t end there.  According to more studies, hearing loss increases:

Because hearing loss (in most cases) happens so gradually, most people learn to adjust slightly to overcompensate.  While that might be okay when you are 45, by the time you are nearing 65, you likely don’t even realize how challenged your hearing really is.  Unfortunately, according to the research your brain is already taxed and potentially suffering from the extra stress of trying to understand and communicate.  Or perhaps potentially worse, you just shut don’t and don’t even try.

Besides aging, common reasons for losing our hearing are a result of all that loud music we listened to when we were young.  Or, if you had an occupation that exposed you to loud noises repeatedly you likely suffered—therefore men are almost twice as likely to as women to have loss at age 50. Or there are others like me where hearing loss is genetic.

Overall, The Centers of Disease Control believe that 15 to 20% of the U.S. population has trouble hearing.  Then once you are in the age range of 65 to 75, it is estimated that one in three have a loss.  Once 75 years of age, approximately one-half of the population needs a hearing aid. Sadly, of all of us who definitely need them, only 30% ever go on to actually get them and wear them.

So what about me?  My original hearing aids that I bought six years ago finally started making a buzzing noise so a week ago I made another appointment with my local Costco Hearing Center. After completing a new test, I learned that my hearing is virtually the same as it was six years ago. That’s good!  And because the life of the hearing aids I bought was only estimated at five years, I felt like I received an extra bonus year by going for six.  And that was in spite of the fact that I accidentally jumped into a swimming pool while wearing them in Mexico about three years ago!

How are my new “ears?”  Absolutely fabulous. And yes I am wearing them in the photo above with the puppies!  These new hearing aids from Costco are the Kirkland Premium 10.0T.  While I’m well aware that they are a Costco “knock-off” of a major hearing aid company, who needs a name-brand when I can get them at such a great price?  In fact, my new hearing aids costs $300 less than my first pair six years ago.  Unless you have more money than you need, or insurance that covers the entire cost, I recommend you go to Costco.

So what do I get for my $1,400?  The minute I put them on I knew they were noticeably improved.  In six years the technology has clearly been enhanced. Now the sound is much more natural, so much so that it sounds completely normal when listening to people speak, watching tv or answering the phone.  Just like my first pair, these new ones stream wirelessly to my iphone but even better, I can now answer my phone just by hitting a tiny button on my right hearing aid.  From there I can speak (like talking to myself) into the phone without holding the phone or even having it visible.  Now I can look like all those people walking around talking to themselves while actually talking on the phone.  I can also program them from my phone to listen to music, the television, and even in a restaurant where I can block out some of the background noise and focus on whomever is speaking.  Oh, and as an add-on, my new hearing aids are actually water-resistant to 3 meters. No more freaking out if I jump into a swimming pool with them on. In addition, my new ears are also rechargeable so no need to continuously buy batteries.

Perhaps best of all,  just like with my first pair of hearing aids, no one knows I’m wearing them unless I tell them.  I understand that they do take a short time to adjust to, but once you make them a habit wearing them is as natural as brushing your teeth every morning.  When you consider all the health benefits, then not wearing them is really only because, #1 you can’t afford them, or #2 your vanity won’t let you.  I get the money part but the vanity doesn’t make any sense when you consider what you are doing to your brain and overall health now and in the future. And if someone you know needs them, I strongly encourage you have them read this article along with the supporting studies.  Surely it is SMART to remember that this simple step is one of the SMARTest things you can do for yourself and those you love as we age.

How is Your Hearing? Five Reasons It Matters

Do My Hearing Aids Make Me Look Fat?